Today is the 52nd birthday of Cindy Crawford. The world is a better place because she is in it. 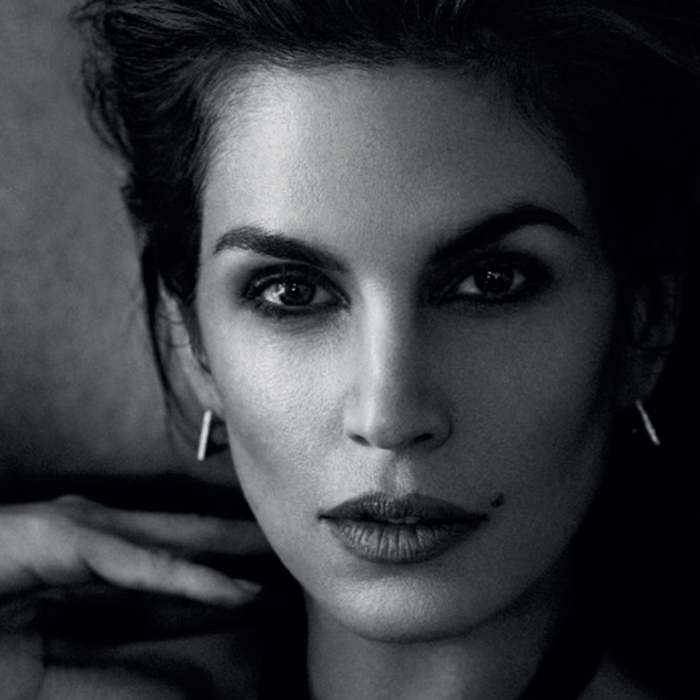 BEST KNOWN FOR: Super model Cindy Crawford rose to fame with her athletic build and all-American looks. She signed multi-million dollar endorsements with Revlon and Pepsi.

Model. Born Cynthia Ann Crawford on February 20, 1966, in DeKalb, Illinois. Beginning in the 1980s and continuing through the 1990s, Cindy Crawford was America’s most celebrated fashion model and one of the most famous in the world, embodying the rise of the “super model” as a late-twentieth-century cultural phenomenon.

Although there had been star models in previous decades–Twiggy in the 1960s, for example, or Lauren Hutton and Cheryl Tiegs in the 1970s–they did not sustain prolonged mainstream recognition. Cindy Crawford and her contemporaries (Kate Moss and Naomi Campbell among them) no longer merely posed as nameless faces on magazine covers, calendars, and fashion runways but, rather, became celebrities whose fame rivaled that of movie stars and rock musicians. Cindy Crawford stood at the forefront of this insurgence.

Although she found fame through her physical appearance, the brown-haired, brown-eyed Crawford first distinguished herself through her intellectual attributes. She was a fine student and class valedictorian at her high school graduation. She enrolled in Chicago’s Northwestern University to take a degree in chemical engineering, but her academic career proved short-lived when, during her freshman year, she left college to pursue a modeling career. Her entrance into the tough, competitive world of high fashion was eased by her winning the “Look of the Year” contest held by the Elite Modeling Agency in 1982. Within months the statuesque (five-foot-nine-and-a-half inches), 130-lb model was featured on the cover of Vogue.

The widespread appeal of Cindy Crawford lay in looks that appealed to both men and women. Her superb body, with its classic 34B-24-35 measurements, attracted men, while her all-American looks and trademark facial mole stopped her short of seeming an unattainable ideal of perfect beauty, and thus she was not threatening to women. Furthermore, her athletic physique was in distinct contrast to many of the waif-like models, such as Kate Moss, who were prevalent during the 1990s.

Cindy Crawford stepped off the remote pedestal of a celebrity mannequin or a glamorous cover girl when she began to assert her personality before the public. She gave interviews in which she discussed her middle-class childhood, her parents’ divorce, and the trauma of her brother’s death from leukemia. These confessions humanized her image and made her approachable, and she went on to host MTV’s House of Style, a talk show that stressed fashion and allowed her to conduct interviews that connected with a younger market. The Cindy Crawford phenomenon continued with her involvement in fitness videos, TV specials, commercial endorsements, and film (Fair Game, 1995, was dismissed both by audiences and critics, but did little to diminish her popularity.) Meanwhile, her already high profile increased with her brief 1991 marriage to actor Richard Gere. The couple was hounded by rumors of homosexuality, fuelled after Crawford appeared on a controversial Vanity Fair cover with the openly lesbian singer k.d. lang. In 1998, Crawford wed entrepreneur and nightclub impresario Rande Gerber. They have two children, Presley and Kaia.

After the arrival of Cindy Crawford, it was not uncommon to see models promoting a vast array of products beyond fashion and cosmetics. Crawford herself signed a multi-million dollar deal to promote Pepsi, as well as her more conventional role with Revlon. Her status was so high that ABC invited her to host a special on teen sex issues with the provocative title of Sex with Cindy Crawford. The opening of the Fashion Café theme restaurant in the mid-1990s marked the height of the super model sensation sparked by Crawford. The café’s association with Crawford and other high profile models revealed the extent to which the “super model” had become a major figure in American culture. By the end of the 20th century, Cindy Crawford was still the best known of these celebrities due to the combination of her wholesomely erotic image and her professional diversification through the many available media outlets.