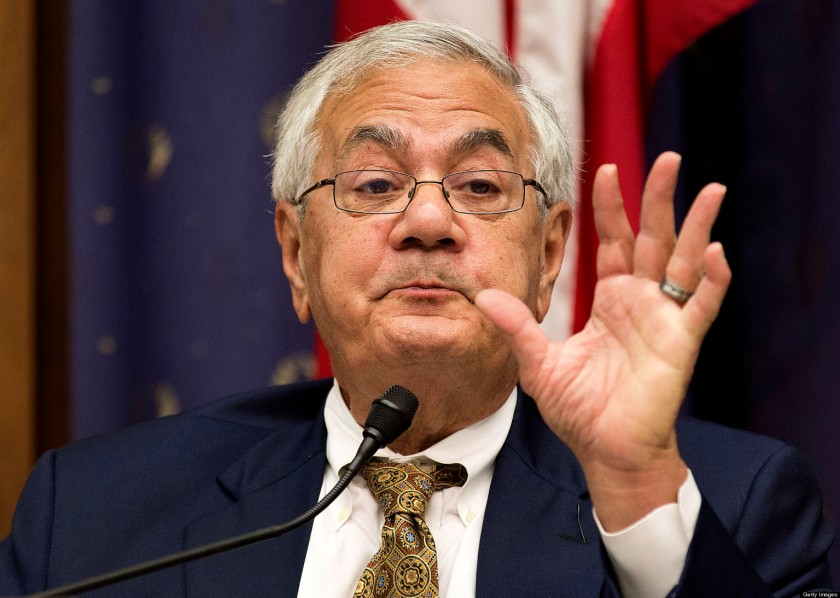 Today is the 78th birthday of the congressman Barney Frank. The world is a better place because he is in it.

BEST KNOWN FOR: Barney Frank is the first U.S. Congressman to voluntarily announce his homosexuality. He is also known for his work on the 2008 American Housing Rescue and Foreclosure Prevention Act.

Massachusetts Congressman Barney Frank, a Democrat, is considered the most prominent gay politician in the United States, but he came from humble Jewish roots. He was born Barnett Frank in Bayonne, New Jersey on March 31, 1940, to Elsie and Samuel Frank. His father ran a Jersey City truck stop and was later jailed for one year for refusing to testify against his brother, who was involved in a kickback scheme. Despite the incident, Frank’s parents instilled in him and his three siblings “a belief in the power of the government to do good,” according to a January 2009 article in The New Yorker.

Frank graduated from Harvard College in 1962, and later pursued graduate studies there, working toward a Doctor of Philosophy degree in government and teaching undergraduate classes. He went on to become the chief assistant to Boston Mayor Kevin White, and later worked for Massachusetts Congressman Michael Harrington. In 1972, Frank was elected to the Massachusetts House of Representatives. He served in that capacity for the following eight years, all the while attending Harvard Law School. Frank was admitted to the bar in Massachusetts in 1979.

During his time in state government, Frank taught part time at his alma mater and several other universities, including Boston University. He also published articles on public affairs and politics.

By the late 1970s, Frank had decided to pursue higher office. In 1980, he ran for and won the U.S. House of Representatives 4th Congressional District seat, which he continued to win every election thereafter. He announced in November 2011 that he would not seek re-election in 2012.

Frank began revealing his homosexuality to friends in his personal life before he ran for Congress, but concealed his sexual preference from the public until May 30, 1987. Frank, the first congressman to ever publicly announce his homosexuality, said that one of his reasons for doing so was that he did not want to end up like closeted bisexual Republican Connecticut Congressman Stewart McKinney: After McKinney’s death, on May 7, 1987, media speculation arose regarding whether or not he was gay. “I don’t want that to happen to me,” Frank told the Washington Post. According to Edge Boston magazine, another catalyst for Frank’s revelation was increased media interest in his private life after former Republican Maryland Congressman Bob Bauman was ousted from his seat following an arrest for soliciting an underage male prostitute.

In his 32-year career as a member of the U.S. Congress, Frank proved himself to be an industrious and accomplished lawmaker. He is well-known for his involvement in the House’s Financial Services Committee, and in mortgage foreclosure bailout issues.

Shortly after Frank announced his imminent departure from Congress, the Washington Post published an article exploring the congressman’s effect on the 2007 housing crisis. Its conclusion was stated in the article’s headline: “Barney Frank didn’t cause the housing crisis.”

Fannie Mae fought aggressively to minimize federal regulation of its activities and attempts to tax its profits. Among its tactics was giving “extravagant favors” to influential lawmakers, including Frank, who received $42,350 in campaign contributions from Fannie Mae and Freddie Mac between 1989 and 2008. But in 2005, Frank also attempted to help sponsor a bipartisan House bill to create an independent regulator for the corporations: it died in the Senate.

Following the subprime mortgage crisis, Frank supported the passage of the American Housing Rescue and Foreclosure Prevention Act, which was created to protect homeowners from foreclosure. The law passed in 2008, and is now considered one of the most important and complex issues of Frank’s career.

Twenty-five years after he revealed to the nation that he was gay, a 72-year-old Frank married his longtime boyfriend, Jim Ready, who was 42 at the time. On the evening of Saturday, July 7, 2012, Frank and Ready exchanged vows at the Boston Marriott Newton in Boston, in a ceremony officiated by Massachusetts Gov. Deval Patrick. Many political luminaries, including Congresswoman Nancy Pelosi, attended the ceremony, but members of the news media were not permitted to attend. By exchanging vows in Massachusetts six months before the end of his congressional career, Frank “took another deliberate first step … [and will] spend the rest of his time in office as the nation’s first congressman in a same-sex marriage,” according to the Washington Post.

In an interview with a New York Magazine reporter in April 2012, Frank said that he wanted to get married while in office because he thinks “it’s important that [his] colleagues interact with a married gay man.” He also told the reporter why he decided to leave Congress at the end of his term. “I’ve been doing this since October of 1967, and I’ve seen too many people stay here beyond when they should,” Frank said. “I don’t have the energy that I used to have. I don’t like it anymore, I’m tired, and my nerves are frayed. And I dislike the negativism of the media. I think the media has gotten cynical and negative to a point where it’s unproductive.”