Today is the 79th birthday of a true original, Ali MacGraw.  She didn’t only represent the late 60s and early 70s Bohemian-meets-American-Prep style: she was one of the people that invented it. Looking back at photos and movies of her from that time makes you want to embrace winter, if not only for the chance to wear chunky knits and prep school blazers. Her effortless chic and classic relaxed looks makes me want to rake leaves or go clam digging or play touch football with my family. Maybe not the last one all that much, but basically, I want to live inside a J.Crew catalog. The world is a better place because she is in it.

BEST KNOWN FOR: Elizabeth Alice “Ali” MacGraw is an American actress, model, author, and animal rights activist. MacGraw first gained attention with her role in Goodbye, Columbus in 1969, for which she won the Golden Globe Award for Most Promising Newcomer.

An alumna of Rosemary Hall (now Choate Rosemary Hall, class of 1955) and Wellesley College (class of 1960), she began working in 1960 as a photographic assistant at Harper’s Bazaar, as an assistant to the legendary fashion maven, Diana Vreeland, where she stayed for six years. She also worked at Vogue, as a fashion model, and as a photographer’s stylist. She has also worked as an interior decorator. MacGraw also appeared in several television commercials including the one for the Polaroid Swinger camera.

She gained notice in the 1969 film Goodbye, Columbus, but real stardom came the following year with the popular film, Love Story, for which she was nominated for the Academy Award for Best Actress. Following this, MacGraw was featured on the cover of Time magazine. In 1971, she also appeared on Richard Blackwell’s worst-dressed list. 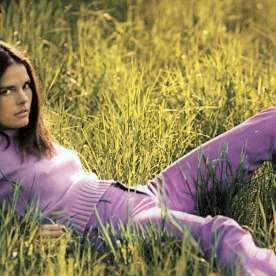 In 1972, after appearing in only four films, she had her footprints and autograph embedded at Grauman’s Chinese Theatre. In 1972, she co-starred in the action adventure film The Getaway with Steve McQueen, whom she married in 1973. They were divorced in 1978. Having taken a break from acting, she re-emerged in the 1978 film Convoy, Players (1979), Just Tell Me What You Want (1980), and then the 1983 television miniseries China Rose and The Winds of War. In 1984, MacGraw joined the hit ABC prime-time soap opera Dynasty as Lady Ashley Mitchell, which, she admitted in a 2011 interview, she did for the money. She appeared in 14 episodes of the show before her character became one of the few casualties of the infamous “Moldavian wedding massacre” cliffhanger episode in 1985.

MacGraw’s autobiography, Moving Pictures (which she now describes as “not well written”), revealed her struggles with alcohol and male dependence. She was treated for the former at the Betty Ford Center. In 1991, People magazine chose her as one of the “50 Most Beautiful People” in the World.

Since 1994, she has lived in Santa Fe, New Mexico, after “fleeing Malibu” when a house she was renting caught fire and burned down. Having become a Hatha Yoga devotee in her fifties, she made a Yoga video with the American Yoga Master Erich Schiffmann, Ali MacGraw Yoga Mind and Body, which was a bestseller upon release and was still popular more than a decade later. The video’s impact was such that in June 2007 Vanity Fair magazine credited her for being one of the people responsible for the practice’s recent popularity in the United States. In keeping with her interests, she narrated a documentary, The Fire of Yoga, in 2003.

She made her Broadway theatre debut in New York City in 2006 as a dysfunctional matriarch in the drama Festen (The Celebration). She was also included in a Seventeen magazine issue for inspiring hairstyles.

In 2008, GQ magazine listed her in their “Sexiest 25 Women in Film Ever” edition for her 1972 role with Steve McQueen in The Getaway.

On October 12, 2010 she appeared on The Oprah Winfrey Show. Oprah arranged a “Love Story Reunion” by reuniting the 1970 Love Story star with co-star Ryan O’Neal. The two discussed their roles in the movie and O’Neal said he had a terrible crush on MacGraw throughout the filming, asking her to go away with him even though both were married at the time. Now that they are single, O’Neal said on “Oprah” that he would again ask MacGraw out. During the show a quote from Calvin Klein was mentioned as saying, “She (McGraw) exemplified the great American Style”.