Today is my birthday! A year and a half ago, I got adopted by my dads and my paperwork said I was 18 months old, so they made my observed birthday May 1st which is May Day and International Workers' Day.  #Birthday #MayDay #InternationalWorkersDay #petsofinstagram #PetLover #DogLovers #Doggie #AnimalLover #Animal #PNW #Dogstagram #InstaPet #SeattlePet #PhotoOfTheDay #DailyPhoto #DogsOfInstagram #InstaPet #RescueDog #dogs #Poodle #Seattle #DailyScraps #SenorScraps #follow #followback

Since his last birthday, he now has an instagram account that is quite popular. Please feel free to follow him at @SenorScraps. He’s great at following back and liking and all that. Anything to promote rescue pet adoption is a great birthday present for him.

Today is the third birthday of a little guy that lives in our house and hides bones behind the potted plants.  We call him Scraps and he is beginning to recognize that we are talking to him when we do.  He was adopted on the first of November with paperwork saying he was 18 months old, so I made his birthday be the first of May.  International Worker’s Day also seems like a good day to have a birthday too, there will always be a celebration.

We found Scraps on the PetFinder.com website, he was at the Collar of Hope foster home located on the Kitsap Peninsula.  Coincidentally, a long-time friend volunteers with them and has a few foster dogs.  You can see his old listing HERE.

Scraps has requested that he not receive any gifts on his birthday and would rather have donations be made to Collar of Hope or your favorite animal-related charity/service.  He has more walks and cuddles and bones than he ever could have imagined and hopes that other dogs get to be as lucky as him.  Here are some direct links for donations:

So what is next for Scraps?  We are in the “thinking about it” phase of creating a children’s book about him and his life to support animal adoption/rescue.  We enjoy very short trips to the dog park down the street, but he is getting more interested in socializing.  Other than that, Scraps is pretty much settled in, he barks at other dogs on the sidewalk from the safety of the closed living window, he sleeps in the sunshine whenever he can find it, and he never met a bone he didn’t like. 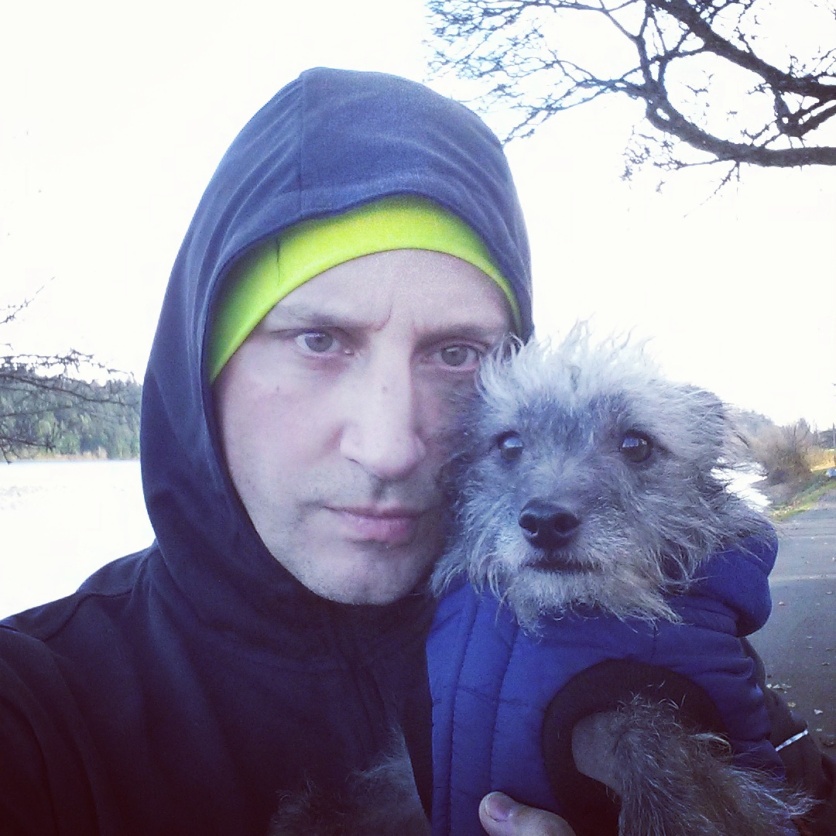 Scraps came to us with the name of Skyler, but I had already changed his name to Scraps before I had even met him.  I found him on the a local rescue website portion of petfinder.com.

From the paperwork I was provided, here is The Story of Scraps. (I have decided that before he got into ‘the system’, he lived under a bush and ate garbage.  I obviously have no way of knowing, but it makes for a great back story)

A471308 2 yrs old Female gray and black Terrier mix was adopted out of the San Bernadino, California Animal Control on August 23rd, 2014.  (I am sure they do great work down there and records get mixed up, but Scraps is a boy).  He was microchipped and given a few vaccines.  I have the name and address of the woman that rescued him from there, she will be getting a photo holiday card thank you note from Scraps.

On the 25th of August, Scraps (still named A471308) was neutered.  Luckily, in those two days, they figured out he was a boy dog and did not attempt to spay him.  On that same day, his rabies tag was issued, they listed him weighing 7.4 lbs and his birthday being exactly 2 years prior.  There is another woman’s name and address as the registered owner.  She will be getting a photo holiday card thank you note from Scraps.

Rounding out Scraps’ holiday card thank you list is the Collar of Hope business address.  I wish I knew more of his story and I will decide on his birthday when the his vet estimates his age.  I will count back from November 1st, the day he arrived at our house.

I posted a photo every day of the first week Scraps was with us on Instagram, Twitter, Facebook and Tumblr to chronicle the progression of his acclimation to his new life, to document Scraps becoming Scraps.  (He has gotten more ‘likes’ than any post I have every written or even any painting Rick has painted.)  It happened a lot quicker and was a lot smoother than I had anticipated.  He was shy and skittish about everything, but now runs around the house and plays with toys, sleeps soundly and even spends time entertaining himself chewing on bones or just staring out the window.  He must know he can relax.

If you are thinking about getting a dog, seriously consider rescuing one from a foster home or shelter.  The people involved are not in it for the money, the sincerely believe that every dog deserves a wagging tail.  The dogs are very grateful, gentle animals that will enrich your lives far more than you can imagine.  If you are still not sure, you can meet Scraps.

Here is a photo of his car ride home: