Today is the 104th birthday of the actor Tyrone Power. Witness for the Prosecution and The Razor’s Edge are my favorite films of his. The world is a better place because he was in it and still feels the loss that he has left. 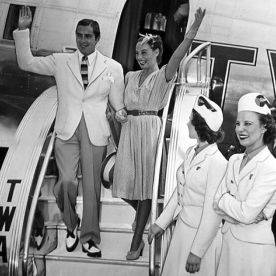 BEST KNOWN FOR:  Tyrone Power was a stage and film actor known for his roles in such films as Witness for the Prosecution and The Mark of Zorro.

Actor Tyrone Power was born on May 5, 1914, in Cincinnati, Ohio. Power was a descendant of a long line of theatrical actors: his great grandfather was a 19th century comedian; his father, Tyrone Power Sr., was a London stage actor; while his mother, Helen Emma Raeume (stage name Patia Power), often acted opposite her husband in Shakespearean productions.

Power spent his childhood frequently traveling from Hollywood to New York, due to his parents’ various film and stage engagements. Tyrone Power inherited their love of theatre and spent his early teens being coached by his mother.

During the early 1930s, Power toured with a Shakespeare repertory company and secured several minor film roles, making his debut in Tom Brown of Culver (1932). He gained a foothold in the theatre when he debuted in the 1935 Broadway production of Romeo and Juliet. He received positive reviews, and shortly after, 20th Century Fox signed him to a seven-year contract. Power’s first effort with the studio was in the costume drama Lloyd’s of London (1936). His performance exceeded all expectations, and that same year he was featured in Ladies in Love and Girls’ Dormitory.

Power maintained his popularity over the next few years with roles ranging in scope from a conniving playboy in Cafe Metropole (1937), to an indignant bandleader in Alexander’s Ragtime Band (1938), to a notorious outlaw in Jesse James (1939). Power also received attention with commanding performances in The Mark of Zorro (1940) and The Black Swan (1942).

After an impressive start, Power’s career was put on hold when he enlisted in the United States Marine Corps, where he served from 1942-’46. Upon his discharge, he was welcomed back by Hollywood with a starring role in the film adaptation of the philosophical novel The Razor’s Edge (1946), followed by the highly original melodrama Nightmare Alley (1947), and the costume epic Prince of Foxes (1949).

During the 1950s, Power continued to take on roles in period pieces such as The Black Rose (1950) and King of the Khyber Rifles (1953). In addition to his trademark adventure films, he was also distinguished by the onscreen chemistry he shared with some of Hollywood’s leading actresses. Among the most notable were his pairings with Susan Hayward in the adventure feature Untamed (1955) and with Marlene Dietrich in Agatha Christie’s Witness for the Prosecution (1957).

Although Power considered himself first and foremost a stage actor, his films are the medium that propelled him to stardom. Nevertheless, throughout his life the matinee idol fought for recognition as a serious dramatic actor.

On November 11, 1958, Power died of a heart attack in Madrid, Spain, while shooting the film Solomon and Sheba. He was 44 years old.

Source: Tyrone Power had it all, but he wanted more – LA Times