BEST KNOWN FOR: American Mary Cassatt was one of the leading artists in the Impressionist movement of the later part of the 1800s.

Artist Mary Stevenson Cassatt was born on May 22, 1844, in Allegheny City, Pennsylvania. Mary Cassatt was the daughter of a well-to-do real estate and investment broker, and her upbringing reflected her family’s high social standing. Her schooling prepared her to be a proper wife and mother and included such classes as homemaking, embroidery, music, sketching and painting. During the 1850s, the Cassatts took their children abroad to live in Europe for several years.

Though women of her day were discouraged from pursuing a career, Mary Cassatt enrolled in Philadelphia’s Pennsylvania Academy of the Fine Arts at age 16. Not surprisingly, she found the male faculty and her fellow students to be patronizing and resentful of her attendance. Cassatt also became frustrated by the curriculum’s slow pace and inadequate course offerings. She decided to leave the program and move to Europe where she could study the works of the Old Masters on her own, firsthand. 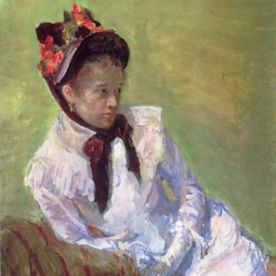 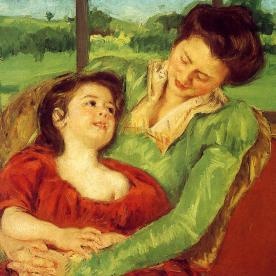 Despite her family’s strong objections (her father declared he would rather see his daughter dead than living abroad as a “bohemian”), Mary Cassatt left for Paris in 1866. She began her study with private art lessons in the Louvre, where she would study and copy masterpieces. She continued to study and paint in relative obscurity until 1868, when one of her portraits was selected at the prestigious Paris Salon, an annual exhibition run by the French government. With her father’s disapproving words echoing in her ears, Cassatt submitted the well-received painting under the name Mary Stevenson.

In 1870, soon after the outbreak of the Franco-Prussian War, Mary Cassatt reluctantly returned home to live with her parents. The artistic freedom she enjoyed while living abroad was immediately extinguished upon her return to the outskirts of Philadelphia. Not only did she have trouble finding proper supplies, but her father refused to pay for anything connected with her art. To raise funds, she tried to sell some of her paintings in New York, but to no avail. When she tried again to sell them through a dealer in Chicago, the paintings were tragically destroyed in a fire in 1871.

In the midst of these obstacles, Cassatt was contacted by the archbishop of Pittsburgh. He wanted to commission the artist to paint copies of two works by the Italian master Correggio. Cassatt accepted the assignment and left immediately for Europe, where the originals were on display in Parma, Italy. With the money she earned from the commission, she was able to resume her career in Europe. The Paris Salon accepted her paintings for exhibitions in 1872, 1873 and 1874, which helped secure her status as an established artist. She continued to study and paint in Spain, Belgium and Rome, eventually settling permanently in Paris.

Though she felt indebted to the Salon for building her career, Mary Cassatt began to feel increasingly constrained by its inflexible guidelines. No longer concerned with what was fashionable or commercial, she began to experiment artistically. Her new work drew criticism for its bright colors and unflattering accuracy of its subjects. During this time, she drew courage from painter Edgar Degas, whose pastels inspired her to press on in her own direction. “I used to go and flatten my nose against that window and absorb all I could of his art,” she once wrote to a friend. “It changed my life. I saw art then as I wanted to see it.”

Her admiration for Degas would soon blossom into a strong friendship, and Mary Cassatt exhibited 11 of her paintings with the Impressionists in 1879. The show was a huge success both commercially and critically, and similar exhibits were staged in 1880 and 1881. Shortly thereafter marked a dormant period for Mary Cassatt, who was forced to withdraw from the art world to care for her ill mother and sister. Her sister died in 1882, but after her mother regained her health, Mary was able to resume painting.

While many of her fellow Impressionists were focused on landscapes and street scenes, Mary Cassatt became famous for her portraits. She was especially drawn to women in everyday domestic settings, especially mothers with their children. But unlike the Madonnas and cherubs of the Renaissance, Cassatt’s portraits were unconventional in their direct and honest nature. Commenting in American Artist, Gemma Newman noted that “her constant objective was to achieve force, not sweetness; truth, not sentimentality or romance.”

Mary Cassatt’s painting style continued to evolve away from Impressionism in favor of a simpler, more straightforward approach. Her final exhibition with the Impressionists was in 1886, and she subsequently stopped identifying herself with a particular movement or school. Her experimentation with a variety of techniques often led her to unexpected places. For example, drawing inspiration from Japanese master printmakers, she exhibited a series of colored prints, including Woman Bathing and The Coiffure, in 1891.

Soon after, Mary Cassatt began taking an interest in young, American artists. She also sponsored fellow Impressionists and encouraged wealthy Americans to support the fledgling movement by purchasing artwork. She became an advisor to several major collectors, with the stipulation that their purchases would eventually be passed on to American art museums.

A 1910 trip to Egypt with her brother, Gardner, and his family would prove to be a turning a point in Mary Cassatt’s life. The magnificent ancient art made her question her own talent as an artist. Soon after their return home, Gardner died unexpectedly from an illness he contracted during the journey. These two events deeply affected Cassatt’s physical and emotional health, and she was unable to paint again until around 1912.

Three years later, she was forced to give up painting altogether as diabetes slowly stole her vision. For the next 11 years, until her death—on June 14, 1926, in Le Mesnil-Théribus, France—Mary Cassatt lived in almost total blindness, bitterly unhappy to be robbed of her greatest source of pleasure.