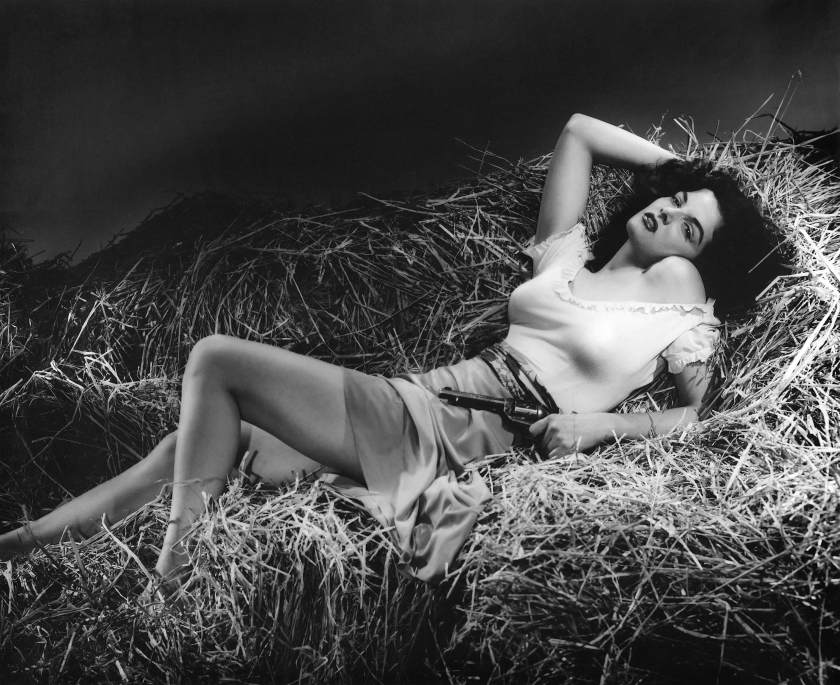 Today is the 97th birthday of the actress Jane Russell. She pushed boundaries, and she did what she loved for her entire life. The world is a better place because she was in it and still feels the loss that she has left. 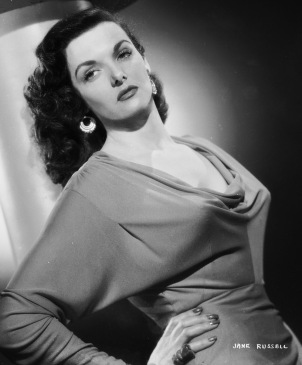 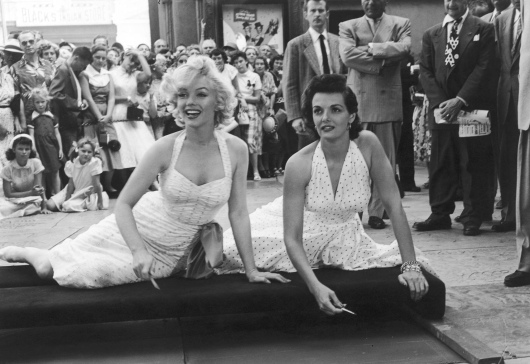 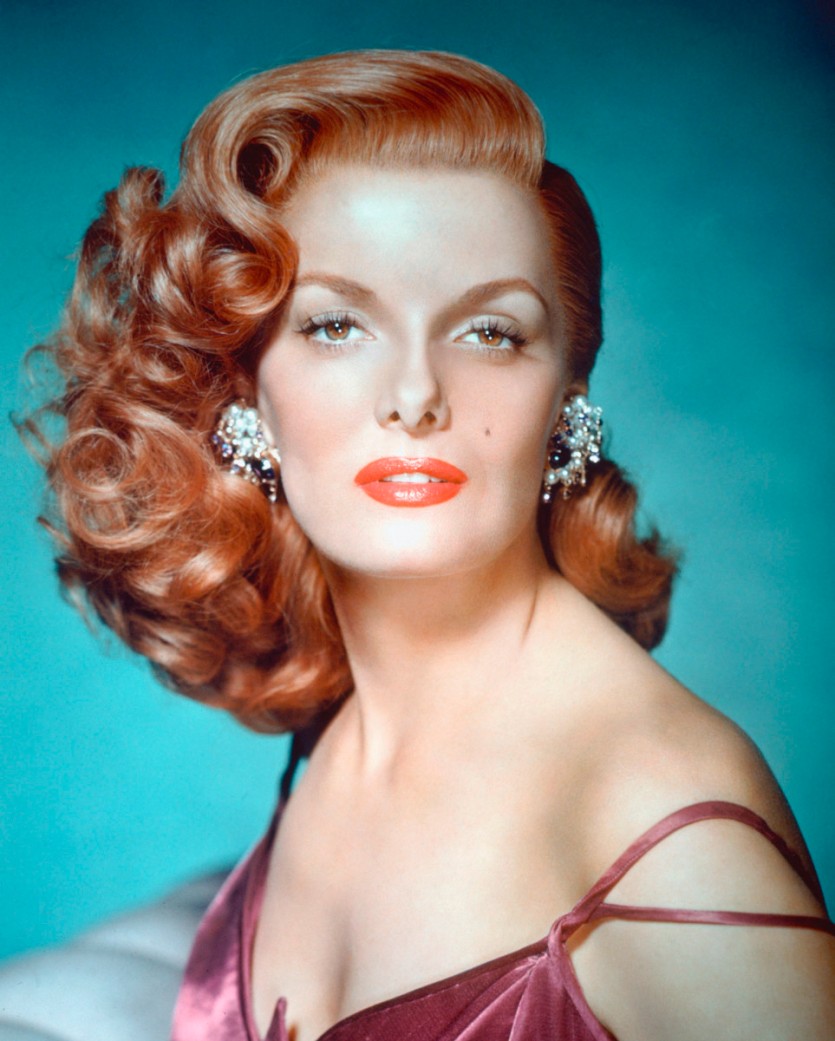 BEST KNOWN FOR: Actress Jane Russell came to fame in the 1940s when a publicity campaign for her debut film The Outlaw focused on her curvaceous figure. She also co-starred with Marilyn Monroe in Gentlemen Prefer Blondes.

There had been previous icons of sexuality, but the beautiful, well-endowed, and photogenic Jane Russell may have been the first woman sought out and hired specifically to be a sex symbol. To star in The Outlaw, his epic story of cleavage in the old west, Howard Hughes conducted a nationwide search for an actress with the necessary screen presence. He found Russell, who had been working as a receptionist. Her father was an office manager for Jergens Soap, her mother taught elocution but had once been a stage actress, and Russell yearned to be a performer herself.

Hughes had his engineers design a seamless underwire brassiere, a breakthrough in bra science to lift Russell’s 38-D breasts, leaving no visible support lines to interrupt the under-blouse contour of her bosom. It was the first practical “lift and separate” push-up bra, but Russell later said she did not wear the uncomfortable contraption during filming. Instead she wore her own bras, adding a layer of tissue paper over the cups to eliminate unsightly support lines. Hughes, despite directing the picture himself, never knew the difference.

Completed in 1941, The Outlaw was unable to pass muster with the Hays Code. A legacy of Will H. Hays, one-time chairman of Republican Party and the first president of the Motion Picture Association of America (MPAA), “the code” was written to enforce morality in Hollywood movies. It stipulated, for example, that there be no nudity, no vulgar language, and that dramatizations of bad behavior from adultery to illegal drugs to any form of criminality had to be followed in the plot by an appropriate ‘punishment’. There was no explicit rule against cleavage and jiggling, but The Outlaw obviously starred Russell’s breasts, so the required certificate of approval was denied, effectively blocking the movie’s release.

Hughes, a millionaire unaccustomed to hearing the word “no”, released the movie in defiance of the code in 1943, but under heavy pressure few cinemas were willing to book it, and the film was almost immediately withdrawn. After several more years of bickering between Hughes and the censors, The Outlaw was released to a few theaters in 1945 and 1946, eventually reaching smaller cities for its first screening as late as 1950. As an actress, especially an actress with no experience, Russell’s performance was adequate, and the controversy ensured the film’s financial success. As entertainment, though, The Outlaw has not passed the test of time. Co-starring Thomas Mitchell and a pre-wrinkled Walter Huston, it is a rather boring black-and-white western, notable mostly for so many scenes of Russell bending over or bouncing as she rode a horse.

Russell’s contract was owned by Hughes through much of her career, and he squandered her talent in many forgettable films. When given the chance, though, Russell could shine on-screen. Her first non-controversial acclaim came when Ginger Rogers was unavailable to play Calamity Jane in The Paleface opposite Bob Hope. Russell stepped in and showed sharp comedic talents, and the film was the funniest send-up of westerns until Blazing Saddles. She later starred twice with Robert Mitchum, in the excellent gangster drama His Kind of Woman and the sultry smuggling thriller Macao, and she re-teamed with Hope for the well-received sequel Son of Paleface.

Of course, Russell’s best work and biggest hit came in Gentlemen Prefer Blondes with Marilyn Monroe. The movie is remembered for its perfect presentation of Monroe’s sexy screen persona, but Russell matched her tit for tat as best friend Dorothy Shaw, the been-around-the-block brunette. Based on the novel by Anita Loos, the husband-hunting story had been filmed as a silent comedy in 1928, then made into a musical for Broadway in 1949, but Russell’s show-stopping song “Ain’t There Anyone Here For Love” was written just for her by Hoagy Carmichael. Strutting through the ship’s exercise room while men glistening with sweat worked out all around her, she sang, “I like big muscles, And red corpuscles, I like a beautiful hunk of man…” It might just be the sexiest musical number in Hollywood history.

Russell had success as a singer beginning in the late 1940s when, between film jobs, she was a frequent headliner at the Latin Quarter Club in Miami Beach. She often sang on Kay Kyser’s popular radio broadcasts, and in the mid-1950s she toured in all-woman trios and quartets she organized herself, often alongside her friend Rhonda Fleming. In Son of Paleface she sang a trio of “Am I in Love?” with Hope and Roy Rogers, and the song was Oscar-nominated. Russell first appeared on the charts in 1950 when her duet of “Kisses and Tears” with Frank Sinatra from Double Dynamite was released as a single, and later the soundtrack for Gentlemen Prefer Blondes made it into the Top 10. She also recorded several albums of Christian music.

In 1954, Russell was again embroiled in MPAA squabbles over The French Line, a gaudy musical co-starring Gilbert Roland. It offered what was then called “vulgar” humor, with a bubble bath scene and “Lookin’ for Trouble,” a suggestive number Russell sang while dancing a hootchy-kootchy and wearing very little. Furthermore, The French Line was filmed in 3-D, causing audiences to lean back in their chairs every time Russell turned toward the camera. Condemned by the Catholic Legion of Decency, the movie ran an hour and forty-two minutes, but many theater owners snipped away as many as twelve minutes of footage fearing it might offend local morality. As a result, most audiences wondered what the fuss was about, and the box office fizzled.

In 1955 she starred with Jeanne Crain but without Monroe in an unnecessary sequel Gentlemen Marry Brunettes, and in 1957 she wore The Fuzzy Pink Nightgown, an amusing comedy with Keenan Wynn, about a kidnapped movie star falling in love with her kidnapper. Her movies, though, were not finding an audience, and Russell disappeared from films and returned to nightclub singing. She served as TV spokeswoman for Lustre Creme shampoo, appeared in a few pictures in the 1960s, and made her last big-screen appearance in 1970 with a supporting role in Darker Than Amber, a now-forgotten but really quite good action movie with Rod Taylor. Russell had a long run on Broadway, replacing Elaine Stritch in the musical Company, and appeared in TV commercials in the 1970s for the Playtex Cross-Your-Heart Bra, describing its structural advantages for “full-figured gals.”

When she was 19, unmarried and pregnant, young Russell needed an illegal abortion, but it was clumsily performed, leaving her unable to bear children. With her first husband, she adopted and raised a daughter and two sons, but the wait and paperwork for their adoptions had taken several years, and after that, Russell spent much of her off-screen time working to make adoption easier. In 1952, she founded the World Adoption International Fund (WAIF), a group which eventually facilitated more than 50,000 adoptions. She testified before Congress in support of the Federal Orphan Adoption Bill in 1953, which allowed children fathered by American troops abroad to be adopted by American parents. In 1980, she was at the forefront of the lobbying effort for the Adoption Assistance and Child Welfare Act, which provides reimbursement for eligible foster and adoptive parents, and financial assistance for the additional costs incurred with adopting handicapped children.

Her first husband was her high school sweetheart, Bob Waterfield, who earned his fame as star quarterback of the Cleveland Rams. Waterfield threw two touchdown passes as Cleveland defeated the Washington Redskins 15-14 in the 1945 NFL Championship Game, later coached the team after its move to Los Angeles, and he was inducted into the Pro Football Hall of Fame in 1965. Russell and Waterfield were married for 25 years, before she divorced him in 1967. Her second husband was Roger Barrett, a stage actor who had appeared with Russell in a summer stock play. They were married only three months before he suffered a heart attack and died, reportedly in the throes of passion with Russell. Her third husband was a real estate broker, John Calvin Peoples, and again the marriage lasted 25 years, until his passing in 1999.

After her last husband’s death, Russell found herself a little lonely and missing the limelight, so she organized a few un-famous friends as her back-up band and began singing in a local Mexican restaurant. After a year and a half at the restaurant her un-advertised performances needed a larger venue, and the eighty-something star took her show to an airport hotel in Santa Maria, California. She performed twice monthly there, until shortly before her 2011 death.