Today is the 134th birthday of the first movie mogul, Louis B. Mayer.  The world is a better place because he was in it and still feels the loss that he has left. 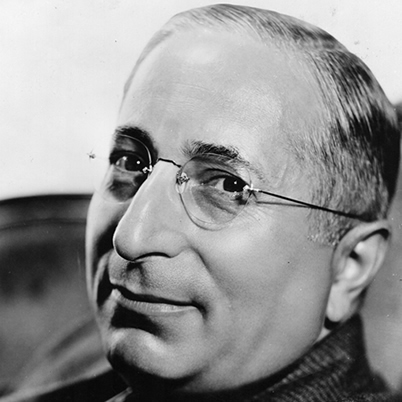 Best Known For:  Louis B. Mayer was a film mogul and the most influential person in Hollywood from the mid-1920s to the late-1940s.

Film producer and executive Louis Burt Mayer was born to an Eastern European Jewish family in Minsk, Russia. Though he was reportedly born on July 12, 1884, Mayer would claim throughout his life that he was born on the Fourth of July; he was similarly unclear about the exact location of his birth. The future mogul was the middle child of five siblings, with two sisters and two brothers, all of whom grew up in Saint John, New Brunswick, Canada.

At the age of 12, Mayer quit school to help his father run the family scrap metal business. When he was 19, he moved to Boston, expanding the father-son scrap enterprise into the United States. Soon after he arrived, Mayer met and married a butcher’s daughter, Margaret Shenberg. The couple had two daughters, Edith Mayer (1905-1987) and Irene Mayer (1907-1990), who would both go on to marry movie executives.

It wasn’t long before Mayer grew tired of the family business and began to look for a less gritty line of work. Luckily, a friend in the know tipped him off to a burlesque theater for sale in Haverhill, Massachusetts, a joint known derisively as the “Garlic Box.” It was a rundown theater with a bad reputation, but the enterprising young Mayer smartly chose to premiere a religious film at the establishment’s opening, immediately currying favor with community skeptics.

The budding businessman soon got a taste for success and began to acquire more and more old theaters in the area, rebuilding their reputations and facades in equal measure. After taking over all five of Haverhill’s theaters, he partnered with Nathan Gordon to gain control of a large theater chain in New England.

In 1914, Mayer made his first foray into film distribution when he bought exclusive rights to the landmark picture The Birth of a Nation with the money he earned pawning his wife’s wedding ring. He would also start a distribution agency in Boston and a talent-booking agency in New York. However, the siren song of Hollywood couldn’t be ignored for long; in 1918, Mayer moved to Los Angeles to form Louis B. Mayer Pictures Corporation.

By then the producer had gained a reputation for his hunger, audacity and ability to spot talent. Far from a hands-off studio honcho, Mayer cultivated a specialty for acquiring talent and roaming the back lots looking for his next glamorous lead. Some of Mayer’s landmark discoveries included Greta Garbo, Joan Crawford, Katharine Hepburn, Clark Gable and Fred Astaire.

The producer’s watershed moment would come when Marcus Loew came knocking on his door. Recently having merged his company with Samuel Goldwyn’s studios to give birth to Metro-Goldwyn, Loew found himself without a head executive for the company. Soon Metro-Goldwyn became Metro-Goldwyn-Mayer and the iconic MGM Studios was born. Over the next 25 years, Mayer built the studio’s reputation on a string of glamorous and mostly uncontroversial films. Some of the biggest hits of Mayer’s era were Ben-Hur (1925), Grand Hotel (1932),  Dinner at Eight (1933) and The Good Earth (1937).

At its height MGM, was Hollywood’s kingmaker (and queenmaker), churning out more films and stars than any other studio. The MGM lot itself was legendary—over 150 acres and as self-sufficient as a town, complete with its own opium den, barbershop and 24-hour dining establishment. Also housed on the property was none other than the iconic MGM lion, whose digs amounted to an onsite zoo.

Louis B. Mayer himself had gained a reputation of leonine proportions not long after his arrival in Hollywood. Characterized by his strong will and tell-it-straight relationships, Mayer once told Robert Young, “Put on a little weight and get more sex, we have a whole stable of girls here.” Clearly, the approach worked; MGM was the most successful studio in Hollywood, even managing to stay profitable through the Great Depression. For almost a decade Mayer held the rank of highest paid man in America, a far cry from his days diving in the Bay of Fundy for scrap metal.

By 1948, the heyday of the Hollywood studio era had begun to fade. MGM had gone years without an Oscar and relations between Mayer and other executives began to fray as profit margins thinned. In 1951, Mayer left MGM after 27 years at the helm. Six years later, on October 29, 1957, the legendary producer and executive died of leukemia.

One of Hollywood’s first true moguls, there is no denying his influence on the early years of the film industry’s boom, but as Mayer himself once said, “The sign of a clever auteur is to achieve the illusion that there is a sole individual responsible for magnificent creations that require thousands of people to accomplish.”