Today is the 108th birthday of the actress Vivian Vance.  She didn’t make Lucy funny, she made her funnier.  She was the point of reference, the voice of reason, the control group with which we were able to judge just how crazy Lucy was.  She was doing what we would be doing if we were in the scene:  questioning and cautioning, but eventually being persuaded to join in the scheme.  The world is a better place because she was in it and still feels the loss that she has left. 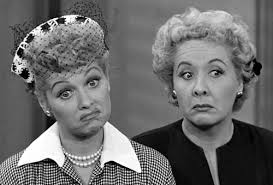 BEST KNOWN FOR: Vivian Vance was an actress chiefly known as Ethel Murtz on the 1950s TV sitcom I Love Lucy.

Actress. Born Vivian Roberta Jones on July 26, 1909, in Cherryvale, Kansas. Vivian Vance is best known as Ethel Mertz, the neighbor, friend, and partner in crime, to Lucy Ricardo (played by Lucille Ball) on the long-running comedy series I Love Lucy. She took to acting at an early age, studying in her native Kansas and later New Mexico.

Moving to New York City in the early 1930s, Vance found work in the theater, landing her first Broadway role in the musical comedy Music in the Air in 1932. Several more musical comedies followed, including Anything Goes with Ethel Merman and Let’s Face It with Danny Kaye and Eve Arden.

In the late 1940s, Vance had a nervous breakdown and went back to New Mexico for a time. After taking a break from working, she moved to California and returned to the stage there. Little did she know that her performance in The Voice of the Turtle at the La Jolla Playhouse in La Jolla, California, would lead to her most famous role. A friend of hers, director Marc Daniels, had recommended her for the part of Ethel Mertz on Lucille Ball and Desi Arnaz’s new television show. Accompanied by Daniels, Arnez went to see Vance in the show and decided that she was a perfect fit for the role.

Initially, Vance was not sure she wanted the part. In the early 1950s, television was an emerging media, and she was working on a film career, with roles in The Secret Fury (1950) with Claudette Colbert and Robert Ryan and The Blue Veil (1951) with Jane Wyman and Charles Laughton. Eventually she decided to pursue the role and wore unflattering clothes and make-up to better fit the character of Ethel.

I Love Lucy premiered in the fall of 1951, and soon the show was a huge hit. It focused on Ricky and Lucy Ricardo, a Cuban bandleader and his wife, played by Desi Arnaz and Lucille Ball. Their best friends, neighbors, and landlords were Fred and Ethel Mertz. William Frawley was Vance’s on-screen husband despite a substantial age difference – Vance was 39 years old and Frawley was 64 years old when the two were first cast in their roles. That fact reportedly irritated Vance, having said once that he should play her father, not her husband.

Often focused Lucy’s wacky misadventures, some of the show’s most memorable moments featured Ball and Vance entangled in some type of scheme gone wrong, such as trying to make money or fool their husbands. Her considerable talents as a comedic sidekick did not go unnoticed. She received four Emmy Award nominations, winning once for best supporting actress in 1954.

After the show ended in 1957, Vance appeared on several specials featuring the characters of I Love Lucy. When Lucille Ball returned to series television without Desi Arnaz in 1962, she convinced Vance to join the cast. This time Vance again played best friend to Ball, but with some notable differences. Vance co-starred as Vivian who had a slimmer figure and more glamorous look than the frumpy Ethel. In the series, The Lucy Show, Ball was a widow with two children who shared her home with Vance, a divorcee, and her son. At the time, Vance was living on the East Coast so she commuted to California to film the show. Eventually, she tired of all the travel and became an occasional guest star instead of a series regular in 1965. The Lucy Show ended in 1972.

Vance returned to California in the mid-1970s. She died on August 17, 1979, in Belvedere, California. At the time of her death, she was married to literary agent John Dodds.

Is the subject of books:
The Other Side of Ethel Mertz: The Life Story of Vivian Vance, 1998, BY: Frank Castelluccio and Alvin Walker