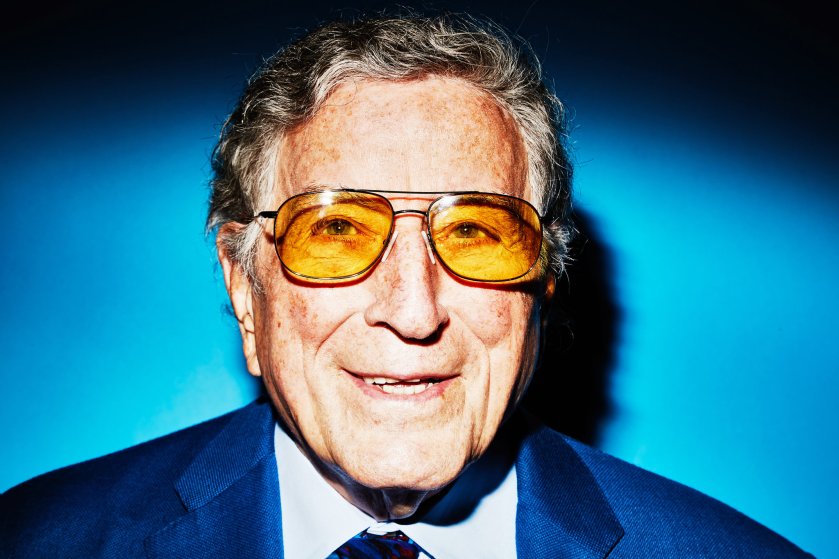 Today is the 93rd birthday of the singer Tony Bennett. The longevity and reinvention and adaption of his career has introduced him to generations that are unaware of his counterparts. The world is a better place because he is in it.

BEST KNOWN FOR: Tony Bennett is an American jazz vocalist, best known for performing standards and his signature song, “I Left My Heart in San Francisco.”

Tony Bennett was born Anthony Dominick Benedetto on August 3, 1926, in Astoria, Queens, New York. Coming of age during the Great Depression, he experienced more difficulty at age 10, when his father passed away.

Bennett attended the High School of Industrial Arts in New York City, but he dropped out to help the family finances and worked as a singing waiter. After serving in the Army infantry during World War II, he took advantage of the G.I. Bill and studied singing at the American Theatre Wing. During this period, his vocal coach Mimi Spear offered some advice that he took to heart: Don’t imitate other singers; emulate instrumentalists instead.

Performing under the name Joe Bari, Bennett was discovered in 1949 by Pearl Bailey, who asked him to open for her show in Greenwich Village. He subsequently caught the attention of Bob Hope, who advised him to take the name Tony Bennett and put him in his road show. As Bennett told Billboard in 1997, “I’ve been on the road ever since.”

Bennett signed with Columbia Records in 1950 and started working with record producer Mitch Miller. His early hits included “Because of You,” “Cold, Cold Heart” and “Rags to Riches,” his smooth voice earning the adoration of young fans.

By the late 1950s, Bennett had become interested in creating jazz albums, and he teamed with some of the top talent in the business. His 1958 album with Count Basie, Basie Swings, Bennett Sings, featured the tracks “Jeepers Creepers” and “Chicago.” While his songs were more substantive by this point, they also failed to match the success of earlier hits.

Bennett returned to the spotlight in 1962 with the debut of “I Left My Heart in San Francisco.” Released as the B-side to “Once Upon a Time,” “I Left My Heart in San Francisco” was the recording that captured the public’s attention; it led to Bennett’s first Grammy Awards, for Best Record of the Year and Best Solo Vocal Performance, and became his signature song. Its popularity also paved the path for more immediate success, with the subsequent releases “I Wanna Be Around” and “The Good Life” going on to crack the Top 20.

Bennett’s success led to some artistic differences between the singer and his record company. His interest in singing quality material made him want to try new songs and new kinds of music, but Columbia for a while wanted him to repeat the style of his early hits. The relationship became further strained in the late 1960s, when the company tried to steer Bennett toward the contemporary rock sound popularized by the Beatles and other artists.

Bennett left Columbia in the early 1970s and soon founded his own label, Improv. Although he recorded what has come to be regarded as some of his best work, including The Tony Bennett/Bill Evans Album (1975) and Together Again (1976), his songs failed to gain traction on the charts. By the end of the decade, Improv was out of business and Bennett had stopped recording.

Bennett’s break from the studio coincided with some difficult times for the singer. Having moved to Los Angeles, he began using cocaine and marijuana, drugs that were an integral part of the celebrity party scene. A near-death experience in the bathtub and the memory of Lenny Bruce’s drug-related death scared Bennett into changing his habits.

With help from his oldest son, Danny, who became his personal manager, Bennett was able to put his personal and professional lives back together. The singer re-signed with Columbia records, and in 1986 he released The Art of Excellence, his first studio album in nearly 10 years.

Danny Bennett saw to it his father received plenty of exposure; the elder Bennett surfaced on talk shows with David Letterman and Jay Leno, made an animated appearance on The Simpsons and delivered an acclaimed performance on MTV Unplugged, which led to a pair of Grammy Award wins.

Bennett unleashed a series of acclaimed tribute albums during this period, including Perfectly Frank (1992), Steppin’ Out (1993) and Tony Bennett on Holiday (1997). He also branched out with an album of children’s songs, Tony Bennett: The Playground (1998), and in 2002 he delivered a collection of holiday favorites with Christmas with Tony Bennett and the London Symphony Orchestra.

In 2002, Bennett teamed up with k.d. Lang to record A Wonderful World. The album netted Bennett another Grammy, for Best Traditional Pop Vocal Album, and established a standard for collaboration that would mark this late stage of his career.

To commemorate his 80th birthday in 2006, the singer released Duets: An American Classic, recorded with a collection of stars that included Barbra Streisand, Elton John and Sting. The project proved such a success that he created another celebratory album in 2011, Duets II. Among the highlights were “The Lady Is a Tramp,” sung with Lady Gaga, as well as “Body and Soul,” which turned out to be the late Amy Winehouse’s final recording. The following March, Bennett was awarded a Grammy for his duo with Winehouse, as well as for Best Traditional Pop Vocal Album.

Also in 2012, his fans were treated to an inside look into the recording of Duets II and the life of the legendary singer in the documentary The Zen of Bennett. The project was the brainchild of Bennett’s son Danny, who served as its producer, and aired at the Tribeca Film Festival that April.

Later that year, Bennett released his next recording, Viva Duets. The Latin-themed album featured songs in English, Spanish and Portuguese, with contributions from such famed talents as Marc Anthony and Gloria Estefan. Despite now being well into his 80s, Bennett lined up a series of concerts to promote this latest album.

In September 2014, Bennett rejoined Lady Gaga for an album of jazz standards called Cheek to Cheek, which won a Grammy for Best Traditional Pop Vocal Album. Discussing the collaboration in an interview with Parade magazine, Bennett expressed what he learned from working with the pop star, “Nobody has communicated with the public more than Lady Gaga. Ever. I trust the audience, and I’m very impressed. As far as they’re concerned, she’s part of their family. The only guy who ever did that was Bing Crosby, years ago.”

The ageless crooner returned to solo vocals with his next album, The Silver Lining: The Songs of Jerome Kern (2015). A pared-down effort in comparison with his recent high-profile duos, the album nevertheless achieved a similar result by claiming the Best Traditional Pop Vocal Album Grammy in 2016.

Along with his music, Bennett has nurtured a lifelong love of visual art. His paintings, which he signs with his given name of Anthony Benedetto, have been featured in the Smithsonian and the Metropolitan Museum of Art. In 1999, he founded Benedetto Arts LLC to oversee this aspect of his artistic career.

Bennett’s first book, Tony Bennett: What My Heart Has Seen (1996), features a collection of his portraits, landscapes and still-lifes rendered in various mediums. He followed with The Good Life: The Autobiography of Tony Bennett (1998), Tony Bennett in the Studio: A Life of Art & Music (2007) and Life is a Gift: The Zen of Bennett (2012).

Along with his 18 Grammy Award wins, Bennett has been honored by the Kennedy Center and the United Nations. He has also been involved in various charitable causes, and in 1999 he co-founded the nonprofit Exploring the Arts alongside Susan Crow, who would eventually become his third wife.

Author of books:
The Good Life: An Autobiography of Tony Bennett (1998, memoir)