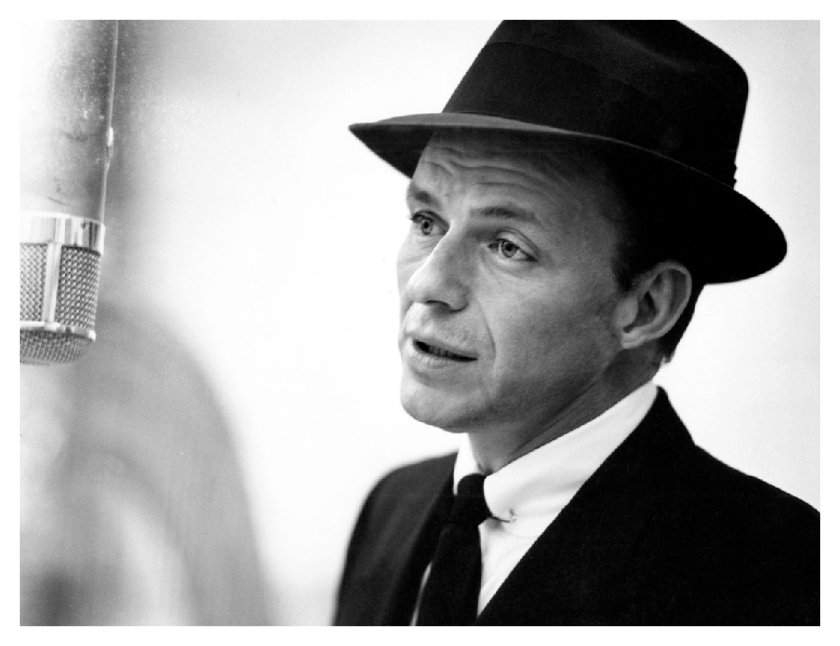 Today is the 104th birthday of the singer/actor Frank Sinatra. I have been listening to his vintage Rocky Jordan detective podcasts from the 50s lately and really enjoy them. His house in Palm Springs is one of my favorite examples of Mid-Century Modern Palm Springs architecture. The world is a better place because he was in it and still feels the loss that he has left. 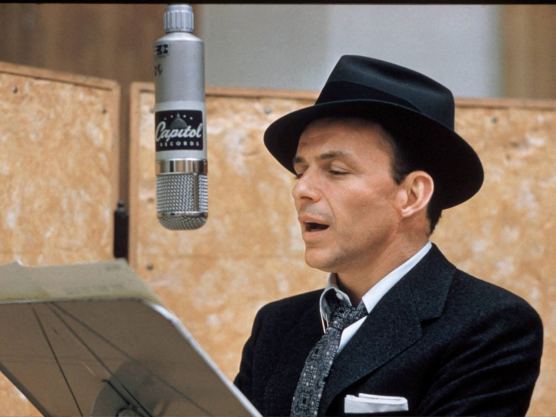 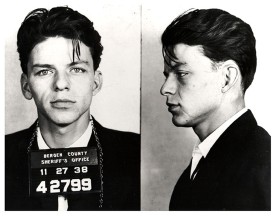 BERGEN COUNTY, NJ – 1938: Pop singer Frank Sinatra poses for a mug shot after being arrested and charged with “carrying on with a married woman” in 1938 in Bergen County, New Jersey. (Photo by Michael Ochs Archives/Getty Images) 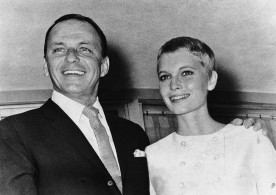 BEST KNOWN FOR: Frank Sinatra was one of the most popular entertainers of the 20th century, forging a career as an award-winning singer and film actor.

Francis Albert “Frank” Sinatra was born on December 12, 1915, in Hoboken, New Jersey. The only child of Sicilian immigrants, a teenaged Sinatra decided to become a singer after watching Bing Crosby perform in the mid-1930s. He’d already been a member of the glee club in his high school and began to sing at local nightclubs. Radio exposure brought him to the attention of bandleader Harry James, with whom Sinatra made his first recordings, including “All or Nothing at All.” In 1940, Tommy Dorsey invited Sinatra to join his band. After two years of chart-topping success with Dorsey, Sinatra decided to strike out on his own.

Between 1943 and 1946, Sinatra’s solo career blossomed as the singer charted a slew of hit singles. The mobs of bobby-soxer fans Sinatra attracted with his dreamy baritone earned him such nicknames as “The Voice” and “The Sultan of Swoon.”

“It was the war years, and there was a great loneliness,” recalled Sinatra, who was unfit for military service due to a punctured eardrum. “I was the boy in every corner drugstore who’d gone off, drafted to the war. That was all.”

Sinatra made his movie acting debut in 1943 with the films Reveille With Beverley and Higher and Higher. In 1945, he won a special Academy Award for The House I Live In, a 10-minute short made to promote racial and religious tolerance on the home front. Sinatra’s popularity began to slide in the postwar years, however, leading to a loss of his recording and film contracts in the early 1950s. But in 1953, he made a triumphant comeback, winning an Oscar for supporting actor for his portrayal of the Italian American soldier Maggio in the classic From Here to Eternity. Although this was his first non-singing role, Sinatra quickly found a new vocal outlet when he received a recording contract with Capitol Records in the same year. The Sinatra of the 1950s brought forth a more mature sound with jazzier inflections in his voice.

Having regained stardom, Sinatra enjoyed continued success in both movies and music for years to come. He received another Academy Award nomination for his work in The Man with the Golden Arm (1955) and earned critical acclaim for his performance in the original version of The Manchurian Candidate (1962). Meanwhile, he continued to be a formidable chart presence. When his record sales began to dip by the end of the 1950s, Sinatra left Capitol to establish his own record label, Reprise. In association with Warner Bros., which later bought Reprise, Sinatra also set up his own independent film production company, Artanis.

By the mid-1960s, Sinatra was back on top again. He received a Grammy Lifetime Achievement Award and headlined the 1965 Newport Jazz Festival with Count Basie’s Orchestra. This period also marked his Las Vegas debut, where he continued on for years as the main attraction at Caesars Palace. As a founding member of the “Rat Pack,” alongside Sammy Davis Jr., Dean Martin, Peter Lawford and Joey Bishop, Sinatra came to epitomize the hard-drinking, womanizing, gambling swinger—an image constantly reinforced by the popular press and Sinatra’s own albums. With his modern edge and timeless class, even radical youth of the day had to pay Sinatra his due. As Jim Morrison of the Doors once said, “No one can touch him.”

The Rat Pack made several films during their heyday: the famed Ocean’s Eleven (1960), Sergeants Three (1962), Four for Texas (1963) and Robin and the Seven Hoods (1964). Back in the world of music, Sinatra had a big hit in 1966 with the Billboard No. 1 track “Strangers in the Night,” which won a Grammy for record of the year. He also recorded the duet “Something Stupid” with his daughter Nancy, who’d previously made waves with the feminist anthem “These Boots Are Made for Walkin’.” The two reached No. 1 for four weeks with “Something Stupid” in spring 1967. By the end of the decade, Sinatra had added another signature song to his repertory—”My Way,” which was adapted from a French tune and featured new lyrics by Paul Anka.

After a brief retirement in the early 1970s, Sinatra returned to the music scene with the album Ol’ Blue Eyes Is Back (1973) and also became more politically active. Having first visited the White House in 1944 while campaigning for Franklin D. Roosevelt in his bid for a fourth term in office, Sinatra worked eagerly for John F. Kennedy’s election in 1960 and later supervised JFK’s inaugural gala in Washington. The relationship between the two soured, however, after the president canceled a weekend visit to Sinatra’s house due to the singer’s connections to Chicago mob boss Sam Giancana. By the 1970s, Sinatra had abandoned his long-held Democratic loyalties and embraced the Republican Party, supporting first Richard Nixon and later close friend Ronald Reagan, who presented Sinatra with the Presidential Medal of Freedom, the nation’s highest civilian award, in 1985.

Frank Sinatra married his childhood sweetheart Nancy Barbato in 1939. They had three children together—Nancy (born in 1940), Frank Sinatra Jr. (born in 1944) and Tina (born in 1948)—before their marriage unraveled in the late 1940s.

In 1951, Sinatra married actress Ava Gardner; after they split, Sinatra remarried a third time, to Mia Farrow, in 1966. That union, too, ended in divorce (in 1968), and Sinatra married for a fourth and final time in 1976 to Barbara Blakely Marx, the ex-wife of comedian Zeppo Marx. The two remained together until Sinatra’s death more than 20 years later.

In October 2013, Farrow made headlines after stating in an interview with Vanity Fair that Sinatra could be the father of her 25-year-old son Ronan, who is Farrow’s only official biological child with director Woody Allen. In the interview she also acknowledged Sinatra as the great love of her life, saying, “We never really split up.” In response to the buzz surrounding his mother’s comments, Ronan jokingly tweeted: “Listen, we’re all *possibly* Frank Sinatra’s son.”

In 1987, author Kitty Kelley published an unauthorized biography of Sinatra, accusing the singer of relying on mob ties to build his career. Such claims failed to diminish Sinatra’s widespread popularity. In 1993, at the age of 77, he gained legions of new, younger fans with the release of Duets, a collection of 13 Sinatra standards that he rerecorded, featuring the likes of Barbra Streisand, Bono, Tony Bennett and Aretha Franklin. While the album was a major hit, some critics assailed the quality of the project as Sinatra had recorded his vocals well before his collaborators laid down their tracks.

Sinatra performed in concert for the last time in 1995 at the Palm Desert Marriott Ballroom in California. On May 14, 1998, Frank Sinatra died of a heart attack at Los Angeles’ Cedars-Sinai Medical Center. He was 82 years old and had, at last, faced his final curtain. With a show business career that spanned more than 50 years, Sinatra’s continued mass appeal can best be explained in the man’s own words: “When I sing, I believe. I’m honest.”

In 2010, the well-received biography Frank: The Voice was published by Doubleday and penned by James Kaplan. The writer released a sequel to the volume in 2015—Sinatra: The Chairman, marking the musical icon’s centennial year.