Forty-six years ago today, the film The Sting premiered. Star-studded, award-winning, classic stands the test off time. You need to see this film. 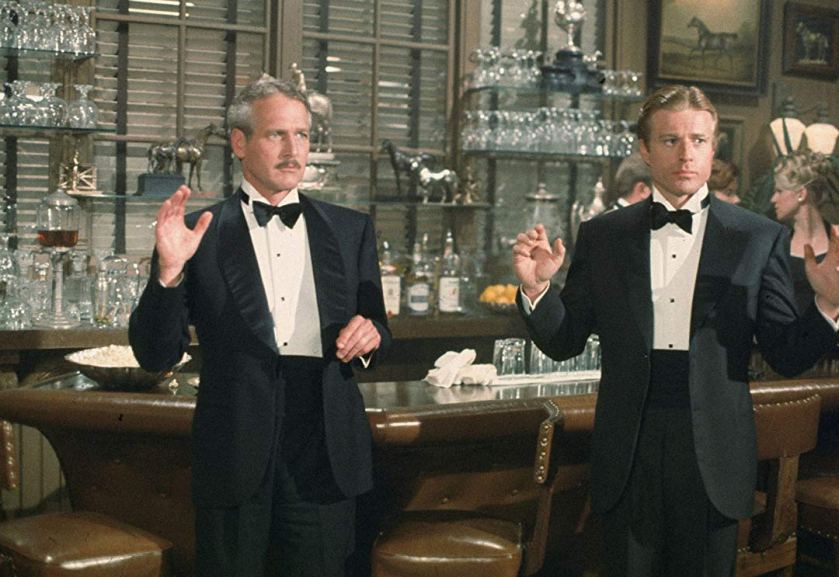 The film takes place in 1936, in the waning years of the Great Depression. Johnny Hooker, a grifter in Joliet, Illinois, cons $11,000 in cash in a pigeon drop from an unsuspecting victim with the aid of his partners Luther Coleman and Joe Erie. Buoyed by the windfall, Luther announces his retirement and advises Hooker to seek out an old friend, Henry Gondorff, in Chicago to teach him “the big con”. Unfortunately, their victim was a numbers racket courier for vicious crime boss Doyle Lonnegan. Corrupt Joliet police Lieutenant William Snyder confronts Hooker, revealing Lonnegan’s involvement and demanding part of Hooker’s cut. Having already blown his share on a single roulette spin, Hooker pays Snyder in counterfeit bills. Lonnegan’s men murder both the courier and Luther, and Hooker flees for his life to Chicago.

Hooker finds Henry Gondorff, a once-great con-man now hiding from the FBI, and asks for his help in taking on the dangerous Lonnegan. Gondorff is initially reluctant, but he relents and recruits a core team of experienced con men to dupe Lonnegan. They decide to resurrect an elaborate obsolete scam known as “the wire”, using a larger crew of con artists to create a phony off-track betting parlor. Aboard the opulent 20th Century Limited, Gondorff, posing as boorish Chicago bookie Shaw, buys into Lonnegan’s private, high-stakes poker game. Shaw infuriates Lonnegan with his obnoxious behavior, then outcheats him to win $15,000. Hooker, posing as Shaw’s disgruntled employee, Kelly, is sent to collect the winnings and instead convinces Lonnegan that he wants to take over Shaw’s operation. Kelly reveals that he has a partner named Les Harmon (actually con man Kid Twist) in the Chicago Western Union office, who will allow them to win bets on horse races by past-posting.

Meanwhile, Snyder has tracked Hooker to Chicago, but his pursuit is thwarted when he is summoned by undercover FBI agents led by Agent Polk, who orders him to assist in their plan to arrest Gondorff using Hooker. At the same time, Lonnegan has grown frustrated with the inability of his men to find and kill Hooker for the Joliet con. Unaware that Kelly is Hooker, he demands that Salino, his best assassin, be given the job. A mysterious figure with black leather gloves is then seen following and observing Hooker.

Kelly’s connection appears effective, as Harmon provides Lonnegan with the winner of one horse race and the trifecta of another. Lonnegan agrees to finance a $500,000 bet at Shaw’s parlor to break Shaw and gain revenge. Shortly thereafter, Snyder captures Hooker and brings him before FBI Agent Polk. Polk forces Hooker to betray Gondorff by threatening to incarcerate Luther Coleman’s widow.

The night before the sting, Hooker sleeps with Loretta, a waitress from a local restaurant. As Hooker leaves the building the next morning, he sees Loretta walking toward him. The black-gloved man appears behind Hooker and shoots her dead – she was Lonnegan’s hired killer, Loretta Salino, and the gunman was hired by Gondorff to protect Hooker.

Armed with Harmon’s tip to “place it on Lucky Dan”, Lonnegan makes the $500,000 bet at Shaw’s parlor on Lucky Dan to win. As the race begins, Harmon arrives and expresses shock at Lonnegan’s bet, explaining that when he said “place it” he meant, literally, that Lucky Dan would “place” (i.e., finish second). In a panic, Lonnegan rushes the teller window and demands his money back. A moment later Polk, Lt. Snyder, and a half dozen FBI agents storm the parlor. Polk confronts Gondorff, then tells Hooker he is free to go. Gondorff, reacting to the betrayal, shoots Hooker in the back. Polk then shoots Gondorff and orders Snyder to get the ostensibly-respectable Lonnegan away from the crime scene. With Lonnegan and Snyder safely away, Hooker and Gondorff rise amid cheers and laughter. Agent Polk is actually Hickey, a con man, running a con atop Gondorff’s con to divert Snyder and provide a solid “blow off”. As the con men strip the room of its contents, Hooker refuses his share of the money, saying “I’d only blow it”, and walks away with Gondorff.