Today is the 116th birthday of the dancer and choreographer George Balanchine.  He is considered the father of modern ballet, meaning the ballet that we think of as ballet today.  The world is a better place because he was in it and still feels the loss that he has left. 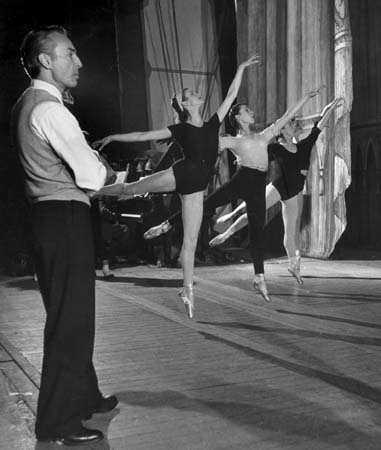 BEST KNOWN FOR: George Balanchine was a ballet choreographer who co-founded and served as artistic director of the New York City Ballet.

Georgy Melitonovich Balanchivadze was born on January 22, 1904, in St. Petersburg, Russia. The son of a composer, Balanchine had a robust understanding of music. In 1914, he enrolled at the Mariinsky Theatre’s ballet school. He graduated in 1921 and subsequently attended the Petrograd State Conservatory of Music, leaving the conservatory after three years.

In 1922, George Balanchine married a 15-year-old ballet student named Tamara Gevergeyeva. This was the first of four separate marriages to dancers, and for each of his wives, Balanchine would make a ballet.

In 1924, Balanchine was invited to tour Germany as part of the Soviet State Dancers. A year later, the young choreographer joined Serge Diaghilev’s Ballet Russes. (His birth name, Balanchivadze, was shortened to Balanchine at Diaghilev’s insistence.) At just 21 years old, Balanchine took over as choreographer for the group, one of the most renowned ballet companies in the world.

After the Ballet Russes collapsed, Balanchine created the company Les Ballets in 1933. Following a performance, American dance aficionado Lincoln Kirstein approached Balanchine about collaboration and the two began a 50-year creative partnership, co-founding the School of American Ballet in 1934. The following year, the professional company known as the American Ballet emerged, becoming the official company of New York’s Metropolitan Opera until 1936.

In 1946, Kirstein and Balanchine co-founded a company that would become the New York City Ballet. Balanchine served as artistic director of the company, based out of New York State Theater at Lincoln Center. He produced more than 150 works for the company, including “The Nutcracker.” While money was tight, Balanchine presented the dancers in practice clothes instead of ornate costumes.

In addition to ballet, George Balanchine choreographed Hollywood movies and Broadway musicals. He is known for his connection to Igor Stravinsky; Balanchine created many ballets to his work, some in collaboration with the composer. He made more than 465 works, which have been performed by nearly every ballet company in the world.

Balanchine created plotless ballets, where the dancing upstaged glitz and storytelling. His work never featured a star, as he believed the performance should outshine the individual. He is credited with developing the neo-classical style distinct to the 20th century. Balanchine served as the artistic director of the New York City Ballet until his death, on April 30, 1983, in New York City.

FILMOGRAPHY AS ACTOR
Afternoon of a Faun: Tanaquil Le Clercq (30-Sep-2013) · Himself