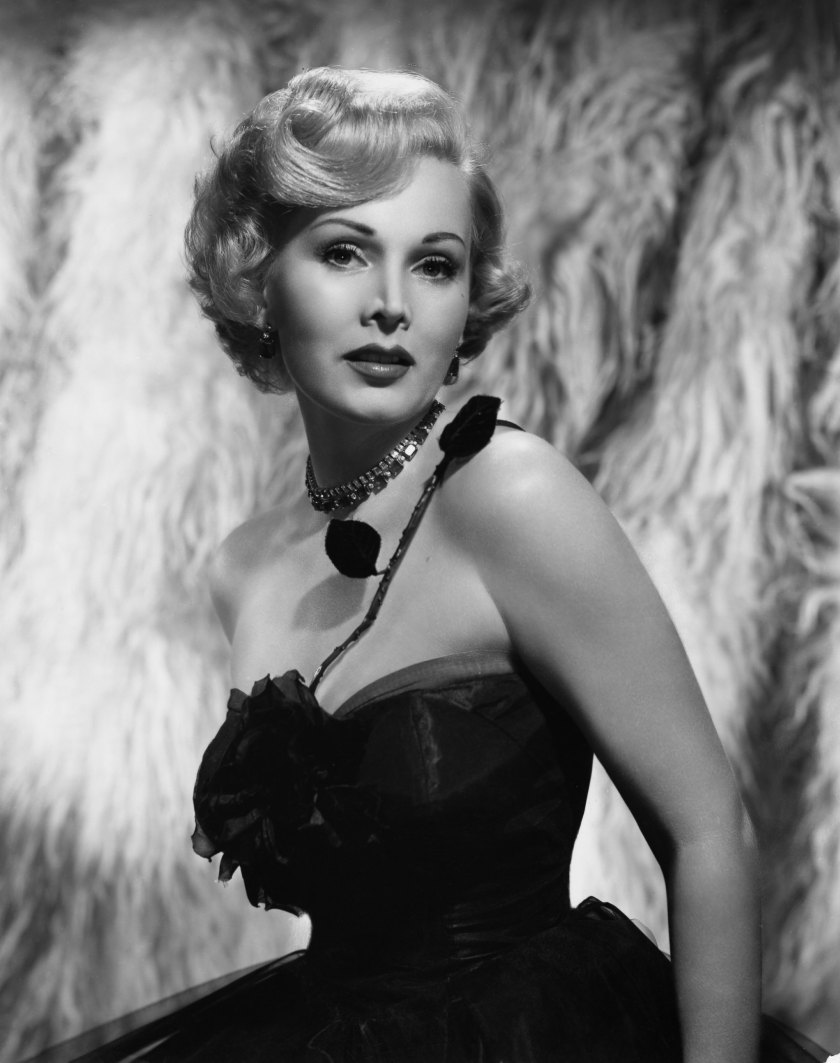 Today is the 103rd birthday of the actress Zsa Zsa. She is best remembered for her glamorous lifestyle, numerous husbands, slapping a cop, and for her cameo appearance in A Nightmare on Elm Street 3: Dream Warriors. The world is a better place because she was in it and still feels the loss that she has left.

BEST KNOWN FOR: Zsa Zsa Gabor was an actress and socialite famous for her bubbly, flirtatious persona — referring to nearly everyone as “dahlink.” She was married nine times.

Sari Gabor was born on February 6, 1917 (some sources say 1918) in Budapest, Hungary, the middle daughter of Vilmos Gabor, a soldier, and Jolie Gabor, the heiress to a European jewelry business. Gabor and her two sisters, Eva and Magda, lived a life of luxury, which included a staff of servants, extensive vacations and stints at expensive boarding schools. Sari started referring to herself as “Zsa Zsa” during childhood.

At the age of 13, Gabor was sent to Switzerland to attend boarding school. While finishing her studies, Gabor was discovered by the famous operatic tenor Richard Tauber, who invited the teenager to sing the soubrette in his new operetta Der singende Traum, or The Singing Dream. After spending three months at the Vienna Acting Academy, Gabor made her stage debut. In 1936, Gabor was crowned Miss Hungary, though she was later disqualified as she’d fibbed about her true age. In 1937, she married her first husband, 35-year-old Turkish government official Burhan Asaf Belge, to whom she proposed. In celebration of the engagement, Gabor’s parents gave their daughter a 10-karat diamond, among other lavish gifts.

Gabor’s marriage began to deteriorate and by 1941, Gabor and her husband agreed to go their separate ways. That same year, Gabor’s parents also began the process of divorce. Gabor and her mother decided to head to the U.S. to join Eva, who was already living in the country with her new husband. Zsa Zsa applied for an official divorce shortly after she was on American soil.

Not long after her arrival in the U.S., Gabor met hotel magnate and recent bachelor Conrad Hilton. The couple began flirting at an upscale club and, according to Gabor, the millionaire offered Zsa Zsa $20,000 to accompany him to Florida that night. She refused. Four months later, on April 10, 1942, the two married. They had one child together, daughter Francesca, with the couple divorcing in 1946.

Zsa Zsa’s good looks and charm landed her a film career in Hollywood, and in 1952 she made her big-screen debut in Lovely to Look At. That same year, she also had a part in We’re Not Married! with Ginger Rogers and Fred Allen, and a starring role in Moulin Rouge with José Ferrer. Gabor later appeared opposite actor George Sanders in Death of a Scoundrel (1956) and had a small role in Orson Welles’ classic Touch of Evil (1958).

Over the years Gabor worked in television as well, making guest appearances on such shows as The Life of Riley, Playhouse 90, Matinee Theatre, Burke’s Law, Gilligan’s Island, and Batman. Vivacious and humorous, Gabor was also a popular guest on talk shows and celebrity game shows.

What audiences seemed most interested in, however, was Zsa Zsa’s personal life. To many, she appeared as an icon of European glamour, luxury and self-indulgence. Often portrayed as a wily seductress, she frequently appeared on television as an alluring, witty and sometimes challenging guest who had a habit of calling nearly everyone “dahlink.” But as a vivacious and dramatic personality, Gabor quickly became tabloid fodder, more famous for her marriages and conspicuous wealth than for her acting abilities.

One of her most infamous incidents came in 1989, when the former beauty queen made headlines for slapping a police officer after he stopped Gabor for a driving violation. She was arrested for assault. During the trial, Gabor made remarks about the officer, who then filed a slander suit against the actress. She was sentenced to serve three days in jail in the criminal case after failing to complete the terms of her probation. The civil suit was settled out of court in 1991.

Gabor once again talked her way into trouble during her long-standing feud with actress Elke Sommer. This battle reached the courts in the 1990s when Sommer sued Zsa Zsa Gabor and Gabor’s husband, Prince Frederick von Anhalt, for defamation of character and libel after the couple made disparaging remarks about the actress to several German publications. The jury ruled in favor of Sommer.

More legal issues surfaced in June 2005 when Zsa Zsa and her husband filed suit against Gabor’s daughter, Francesca Hilton, accusing her of larceny and fraud. The actress made headlines again in 2009, when her lawyer announced that she had lost at least $7 million from investments with Bernard Madoff, the convicted investment adviser who admitted to operating a Ponzi scheme that defrauded thousands of investors.

Zsa Zsa began dealing with serious health problems in 2002, when she was badly injured in a car crash. She suffered broken bones, cuts and bruises, and spent several days in a coma. It took her months to recover from the accident, but the resulting injuries left the actress confined to a wheelchair. In 2005, Gabor faced more medical issues when she suffered a stroke.

Her health began to seriously falter further in July 2010, when she broke her hip and underwent replacement surgery. Soon after, she landed in critical condition after a blood transfusion. Then in January 2011, doctors were forced to amputate her right leg when an untreated blood clot led to a gangrenous infection.

On March 23, 2011, Gabor had to be hospitalized for high blood pressure when she learned of the death of actress Elizabeth Taylor. According to her publicist, John Blanchett, Gabor was distraught by Taylor’s death, saying “I’m next.” She experienced another health crisis that May and was taken to the hospital for a stomach infection. In October, she underwent surgery to replace her feeding tube.

Gabor’s fragile health led her daughter Francesca to file suit against her stepfather, Prince Frederic von Anhalt. The two parties settled their dispute in July 2012, with von Anhalt serving as Gabor’s conservator and Hilton regaining visitation rights to her mother. Von Anhalt had to supply the court with monthly reports on Gabor’s health and financial data.

Gabor was once renowned as “the most successful courtesan of the 20th century,” and reportedly conducted romances with famous figures such as Sean Connery, Richard Burton, Frank Sinatra and even Henry Kissinger. Gabor has had nine marriages in total, although the actress claims she has only had eight different husbands.

Following her divorces from Belge and Hilton, Gabor had a six-year marriage to actor George Sanders, who later married Zsa Zsa’s sister, Magda, just to spite his ex-wife. This was followed by a string of husbands: financier Herbert Hutner, oil tycoon Joshua Cosden, inventor Jack Ryan, attorney Michael O’Hara and actor Felipe de Alba. In 1986, she married her current husband, Prince Frederick von Anhalt, a man roughly 30 years her junior. As his wife, Gabor was awarded the title Princess von Anhalt, Duchess of Saxony. Some royal genealogists questioned this title, however, when further research revealed that Frederick von Anhalt received the title from an adult adoption by Princess Marie-Auguste of Anhalt.