Today is the 208th birthday of the author Charles Dickens. Read his books, watch the film adaptations of them, everyone has their favorite. I have paraphrased his epitaph hundreds of times when I am writing about someone that inspires me. The world is a better place because he was in it and still feel the loss that he has left. 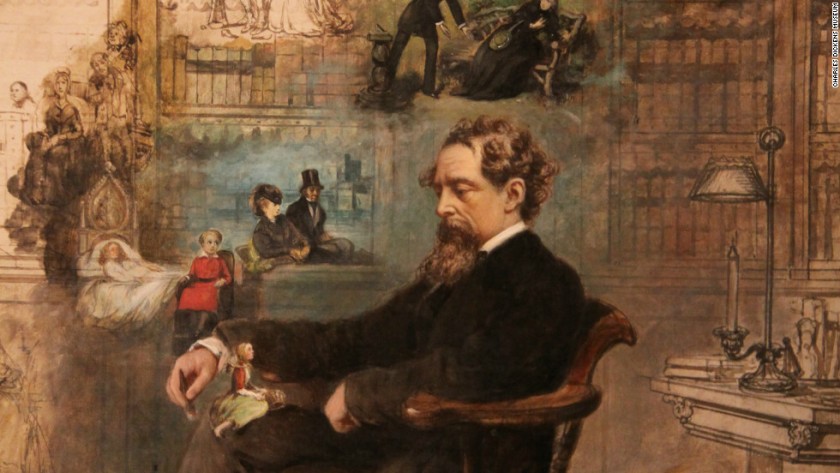 Charles John Huffam Dickens was born in Landport, Portsmouth, on February 7, 1812. Charles was the second of eight children to John Dickens (1786–1851), a clerk in the Navy Pay Office, and his wife Elizabeth Dickens (1789–1863). The Dickens family moved to London in 1814 and two years later to Chatham, Kent, where Charles spent early years of his childhood. Due to the financial difficulties they moved back to London in 1822, where they settled in Camden Town, a poor neighborhood of London.

The defining moment of Dickens’s life occurred when he was 12 years old. His father, who had a difficult time managing money and was constantly in debt, was imprisoned in the Marshalsea debtor’s prison in 1824. Because of this, Charles was withdrawn from school and forced to work in a warehouse that handled ‘blacking’ or shoe polish to help support the family. This experience left profound psychological and sociological effects on Charles. It gave him a firsthand acquaintance with poverty and made him the most vigorous and influential voice of the working classes in his age.

After a few months Dickens’s father was released from prison and Charles was allowed to go back to school. At fifteen his formal education ended and he found employment as an office boy for an attorney, while he studied shorthand at night. From 1830 he worked as a shorthand reporter in the courts and afterwards as a parliamentary and newspaper reporter.

In 1833 Dickens began to contribute short stories and essays to periodicals. A Dinner at Popular Walk was Dickens’s first published story. It appeared in the Monthly Magazine in December 1833. In 1834, still a newspaper reporter, he adopted the soon to be famous pseudonym Boz. Dickens’s first book, a collection of stories titled Sketches by Boz, was published in 1836. In the same year he married Catherine Hogarth, daughter of the editor of the Evening Chronicle. Together they had 10 children before they separated in 1858.

Although Dickens’s main profession was as a novelist, he continued his journalistic work until the end of his life, editing The Daily News, Household Words, and All the Year Round. His connections to various magazines and newspapers gave him the opportunity to begin publishing his own fiction at the beginning of his career.

The Posthumous Papers of the Pickwick Club was published in monthly parts from April 1836 to November 1837. Pickwick became one of the most popular works of the time, continuing to be so after it was published in book form in 1837. After the success of Pickwick, Dickens embarked on a full-time career as a novelist, producing work of increasing complexity at an incredible rate: Oliver Twist (1837-39), Nicholas Nickleby (1838-39), The Old Curiosity Shop, and Barnaby Rudge as part of the Master Humphrey’s Clock series (1840-41), all being published in monthly installments before being made into books.

In 1856 his popularity had allowed him to buy Gad’s Hill Place, an estate he had admired since childhood. In 1858 Dickens began a series of paid readings, which became instantly popular. In all, Dickens performed more than 400 times. In that year, after a long period of difficulties, he separated from his wife. It was also around that time that Dickens became involved in an affair with a young actress named Ellen Ternan. The exact nature of their relationship is unclear, but it was clearly central to Dickens’s personal and professional life.

In the closing years of his life Dickens worsened his declining health by giving numerous readings. During his readings in 1869 he collapsed, showing symptoms of mild stroke. He retreated to Gad’s Hill and began to work on Edwin Drood, which was never completed.

Charles Dickens died at home on June 9, 1870 after suffering a stroke. Contrary to his wish to be buried in Rochester Cathedral, he was buried in the Poets’ Corner of Westminster Abbey. The inscription on his tomb reads:

“He was a sympathiser to the poor, the suffering, and the oppressed; and by his death, one of England’s greatest writers is lost to the world.”

‘Oliver Twist’ (1837-1838)
Oliver Twist, Dickens first novel, follows the life of an orphan living in the streets. The book was inspired by how Dickens felt as an impoverished child forced to get by on his wits and earn his own keep. As publisher of a magazine called Bentley’s Miscellany, Dickens began publishing Oliver Twist in installments between February 1837 and April 1838, with the full book edition published in November 1838. Dickens continued showcasing Oliver Twist in the magazines he later edited, including Household Words and All the Year Round. The novel was extremely well-received in both England and America. Dedicated readers of Oliver Twist eagerly anticipated the next monthly installment.

‘A Christmas Carol’ (1843)
On December 19, 1843, Dickens published A Christmas Carol. The book features the timeless protagonist Ebenezer Scrooge, a curmudgeonly old miser, who, with the help of a ghost, finds the Christmas spirit. Dickens penned the book in just six weeks, beginning in October and finishing just in time for the holiday celebrations. The novel was intended as a social criticism, to bring attention to the hardships faced by England’s lower classes. The book was a success, selling more than 6,000 copies upon publication. Readers in England and America were touched by the book’s empathetic emotional depth; one American entrepreneur reportedly gave his employees an extra day’s holiday after reading it. Despite literary critiques, the book remains one of Dickens’ most well-known and beloved works.

‘David Copperfield’ (1849 to 1850)
David Copperfield was the first work of its kind: No one had ever written a novel that simply followed a character through his everyday life. From May 1849 to November 1850, Dickens published the book in monthly instillations, with the full novel form published in November 1850. In writing it, Dickens tapped into his own personal experiences, from his difficult childhood to his work as a journalist. Although David Copperfield is not considered Dickens’ best work, it was his personal favorite. It also helped define the public’s expectations of a Dickensian novel.

‘Bleak House’ (1852 to 1853)
Following the death of his father and daughter and separation from his wife, Dickens’ novels began to express a darkened worldview. In Bleak House, published in installments from 1852 to 1853, he deals with the hypocrisy of British society. It was considered his most complex novel to date.

‘Hard Times’ (1854)
Hard Times takes place in an industrial town at the peak of economic expansion. Published in 1854, the book focuses on the shortcomings of employers as well as those who seek change.

‘A Tale of Two Cities’ (1859)
Coming out of his “dark novel” period, in 1859 Dickens published A Tale of Two Cities, a historical novel that takes place during the French Revolution in Paris and London. He published it in a periodical he founded, All the Year Round. The story focuses on themes of the need for sacrifice, the struggle between the evils inherent in oppression and revolution, and the possibility of resurrection and rebirth.

‘Great Expectations’ (1861)
Great Expectations, published in serial form between December 1860 to August 1861 and in novel form in October 1861, is widely considered Dickens’ greatest literary accomplishment. The story, Dickens’ second narrated in the first person, focuses on the lifelong journey of moral development for the novel’s protagonist, an orphan named Pip. With extreme imagery and colorful characters, the well-received novel’s themes include wealth and poverty, love and rejection, and good versus evil.

Other Novels
After the publication of Oliver Twist, Dickens struggled to match the level of its success. From 1838 to 1841, he published The Life and Adventures of Nicholas Nickleby, The Old Curiosity Shop, and Barnaby Rudge. Another novel from Dickens’ darker period is Little Dorrit (1857), a fictional study of how human values come in conflict with the world’s brutality. Dickens’ novel Our Mutual Friend, published in serial form between 1864 to 1865 before being published as a book in 1865, analyzes the psychological impact of wealth on London society.