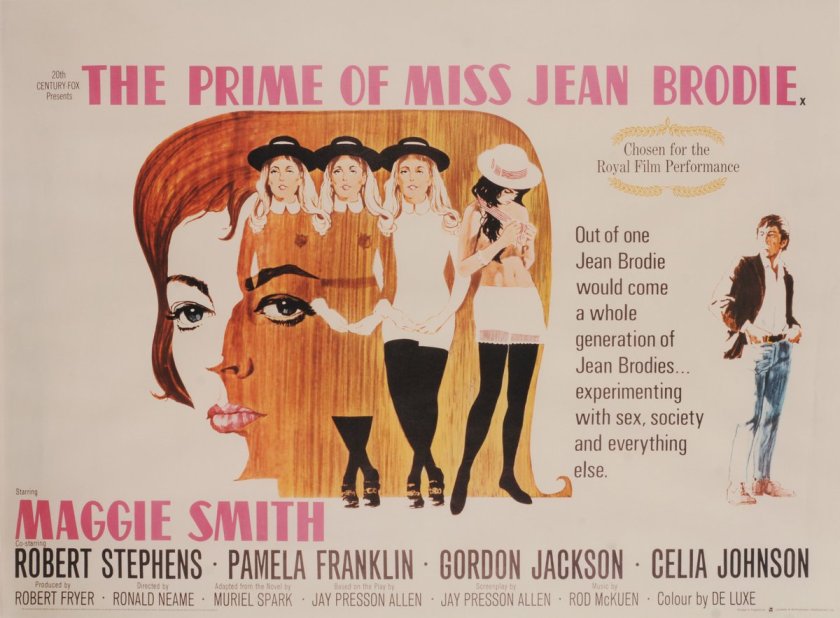 Fifty-one years ago today, the film The Prime of Miss Jane Brodie premiered. Me even mentioning that Maggie Smith is brilliant is like telling you that the sky is up. But this is no exception. You have to see this film.

Jean Brodie is a teacher at Marcia Blaine School for Girls in Edinburgh, Scotland, in the 1930s. Brodie is known for her tendency to stray from the school’s curriculum, to romanticize fascist leaders like Benito Mussolini and Francisco Franco, and to believe herself to be in the prime of life. Brodie devotes her time and energy to her four special 12-year-old junior school girls, called the Brodie Set: Sandy, Monica, Jenny and Mary.

The Brodie Set often go to art museums, theatre, and have picnics on the school lawn, which rather upsets the school’s austere headmistress, Emmeline Mackay, who dislikes that the girls are cultured to the exclusion of hard knowledge, and seem precocious for their age. She has a grudge against Brodie, who has tenure and was hired six years before Mackay became headmistress. Brodie boasts to her girls that the only way she will stop teaching is if she is assassinated.

Brodie catches the eye of music teacher/church choirmaster Gordon Lowther, with whom she and her girls spend a lot of time at his home in Cramond, a seaside village on the outskirts of Edinburgh. Brodie sometimes spends the night with Lowther, although she tries to conceal this from the girls. Lowther wants to get married, but Brodie drags her feet. She still has feelings for her married ex-lover, Teddy Lloyd, the school’s art teacher, who steadily pursues her.

Other school staff, also somewhat disapproving of her unorthodox teaching methods and her influence on the girls, are: Miss Campbell, the physical education teacher; Miss Ellen and Miss Allison, the Kerr sisters, who teach sewing; Miss McKenzie, the strict librarian; and Miss Gaunt, the headmistress’s mouselike secretary. Miss Gaunt’s brother, a church deacon, asks Lowther to resign as church organist and elder because of his relationship with Brodie.

As the years pass, Brodie is seen rising to her apex, then experiences a spectacular fall, orchestrated by one of the Brodie Set and playing into the desire of Miss Mackay – and other faculty – to see Brodie gone. During her downfall, she loses Lowther, who gets engaged to Miss Lockhart, a chemistry teacher and one of the few teachers who tended to be sympathetic towards Brodie.

As the Brodie Set grow older and become students in the Senior School, Brodie begins to cast her spell over a new group of junior students, particularly Clara. Sandy becomes slightly distant from Mary, Monica and Jenny. Brodie tries to manoeuvre Jenny and Mr Lloyd into having an affair, and Sandy into spying on them for her. However, it is actually Sandy, resentful of Brodie’s constant praise of Jenny’s beauty, who has an affair with Mr. Lloyd. Sandy ends the affair because of Mr Lloyd’s obsession with Brodie.

Mary, influenced by Brodie, sets out to join her brother, whom she believes to be fighting for Franco. Mary is killed when her train is attacked shortly after crossing the frontier. This event serves as the last straw for Sandy, who informs the school’s board of governors of Brodie’s efforts to impose her politics on her students, which finally leads to Brodie’s termination.

Before Brodie’s departure, Sandy confronts her for her manipulation of Mary and Mary’s senseless death, and the harmful influence she exerted on other girls, adding that Mary’s brother is actually fighting for the Spanish Republicans. Brodie makes some harsh but astute comments about Sandy’s character, particularly her ability to coldly judge and destroy others. Sandy retorts that Brodie professed to be an admirer of conquerors and walks out of the classroom, as Brodie screams “Assassin!”

Sandy, Monica, and Jenny finish at the school. Despite knowing full well that she had betrayed Brodie to Mackay, Sandy believes she was protecting future girls who would have been targets of Brodie, though perhaps, less commendably, she acted on personal resentment over Brodie’s preference for Jenny, and Teddy Lloyd’s obsession with Brodie.

As Sandy leaves the school, her face streaked with tears, Brodie (in voiceover) states her oft-repeated motto: “Little girls, I am in the business of putting old heads on young shoulders, and all my pupils are the crème de la crème. Give me a girl at an impressionable age, and she is mine for life.”