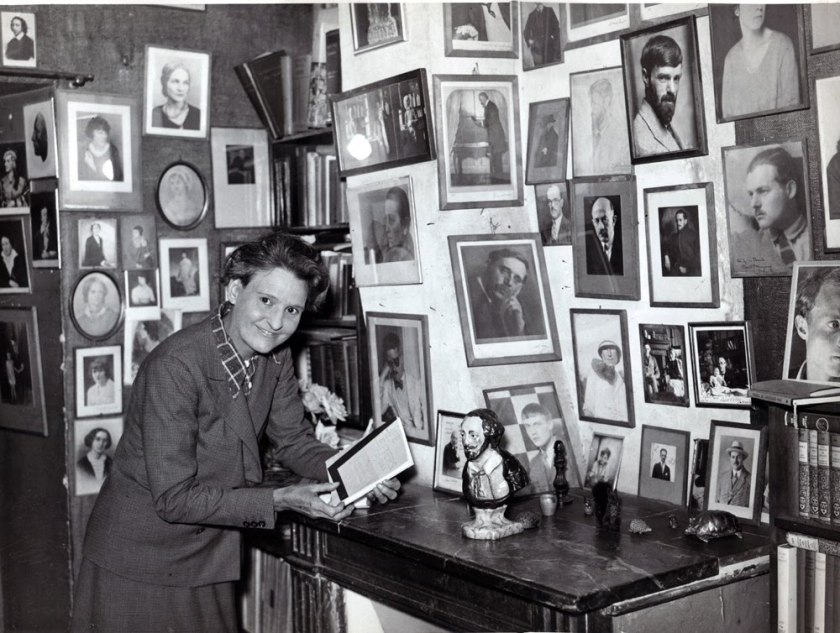 Today is the 133rd birthday of the publisher and book shop owner, the book shop owner Sylvia Beach. Her influence and support helped some of the most popular and important authors of the 20th century. The world is a better place because she was in it and still feels the los that she has left.

BEST KNOWN FOR: Sylvia Beach, born Nancy Woodbridge Beach, was an American-born bookseller and publisher who lived most of her life in Paris, where she was one of the leading expatriate figures between World War I and II.

Beach was born in her father’s parsonage in Baltimore, Maryland, United States, on March 14, 1887, the second of three daughters of Sylvester Beach and Eleanor Thomazine Orbison. Although named Nancy after her grandmother Orbison, she later decided to change her name to Sylvia. Her maternal grandparents were missionaries to India, and her father, a Presbyterian minister, was descended from several generations of clergymen. When the girls were young the family lived in Baltimore and in Bridgeton, New Jersey. Then in 1901, the family moved to France upon Sylvester Beach’s appointment as assistant minister of the American Church in Paris and director of the American student center.

Beach spent the years 1902-1905 in Paris, returning to New Jersey in 1906 when her father became minister of the First Presbyterian Church of Princeton. Beach made several return trips to Europe, lived for two years in Spain, and worked for the Balkan Commission of the Red Cross. During the last years of the Great War, she was drawn back to Paris to study contemporary French literature.

While conducting some research at the Bibliothèque Nationale, Beach found the name of a lending library and bookshop, La Maison des Amis des Livres at 7 rue de l’Odéon, Paris VI, in a French literary journal. There she was warmly welcomed by the owner who, to her surprise, was a plump fair-haired young woman, Adrienne Monnier. Monnier was wearing a garment that looked like a cross between a peasant’s dress and a nun’s habit, “with a long full skirt … and a sort of tight-fitting velvet waistcoat over a white silk blouse. She was in gray and white like her bookshop.” Although Beach was dressed in a Spanish cloak and hat, Monnier knew immediately that she was American. At that first meeting Monnier declared, “I like America very much”. Beach replied that she liked France very much. They later became lovers and lived together for 36 years until Monnier’s suicide in 1955.

Beach immediately became a member of Monnier’s lending library, and when in Paris she regularly attended the readings by authors such as André Gide, Paul Valéry and Jules Romains. Inspired by the literary life of the Left Bank and by Monnier’s efforts to promote innovative writing, Beach dreamed of starting a branch of Monnier’s book shop in New York that would offer contemporary French works to American readers. Since her only capital was US$3,000 which her mother gave her from her savings, Beach could not afford such a venture in New York. However, Paris rents were much cheaper and the exchange rates favorable, so with Monnier’s help, Beach opened an English language bookstore and lending library that she named Shakespeare and Company. Four years beforehand, Monnier had been among the first women in France to found her own bookstore. Beach’s bookstore was located at 8 rue Dupuytren, Paris VI.

Shakespeare and Company quickly attracted both French and American readers – including a number of aspiring writers to whom Beach offered hospitality and encouragement as well as books. As the franc dropped in value and the favorable exchange rate attracted a huge influx of Americans, Beach’s shop flourished and soon needed more space. In May 1921, Shakespeare and Company moved to 12 rue de l’Odéon, just across the street from Monnier’s Maison des Amis des Livres. Shakespeare and Company gained considerable fame after it published James Joyce’s Ulysses in 1922, as a result of Joyce’s inability to get an edition out in English-speaking countries. Beach would later be financially stranded when Joyce signed on with another publisher, leaving Beach in debt after bankrolling, and suffering severe losses from, the publication of Ulysses.

Shakespeare and Company experienced difficulty throughout the Great Depression of the 1930s, but remained supported by wealthy friends, including Bryher. In 1936 when Beach thought that she would be forced to close her shop, André Gide organized a group of writers into a club called Friends of Shakespeare and Company. Subscribers paid 200 francs a year to attend readings at Shakespeare and Company. Although subscriptions were limited to a select group of 200 people (the maximum number the store could accommodate), the renown of the French and American authors participating in readings during those two years attracted considerable attention to the store. Beach recalled that by then, “we were so glorious with all these famous writers and all the press we received that we began to do very well in business”. Violette Leduc describes meeting her and the ambiance of the shop in her autobiography La Bâtarde. Shakespeare and Company remained open after the Fall of Paris, but by the end of 1941, Beach was forced to close. She was interned for six months during World War II at Vittel until Tudor Wilkinson managed to secure her release in February 1942. Beach kept her books hidden in a vacant apartment upstairs at 12 rue de l’Odeon. Ernest Hemingway symbolically “liberated” the shop in person in 1944, but it never re-opened for business.

After Monnier’s suicide in 1955, Beach had a relationship with Camilla Steinbrugge. Although Beach’s income was modest during the last years of her life, she was widely honored for her publication of Ulysses and her support of aspiring writers during the 1920s. She remained in Paris until her death in 1962, and was buried in Princeton Cemetery. Her papers are archived at Princeton University.

American George Whitman opened a new bookshop in 1951 at a different location in Paris (in the rue de la Bûcherie) originally called Le Mistral, but renamed Shakespeare and Company in 1964 in honor of the late Sylvia Beach. Since his death in 2011, it has been run by his daughter Sylvia Beach Whitman, named after Beach.