Eighty-one years ago today, the John Steinbeck novel The Grapes of Wrath was published and quickly became a critical and popular success. This is another book that is popular for United States public school students to read in class. If it happens at the right time, it can become one of the books that can help solidify a student’s lifelong love of reading. You have to read this. 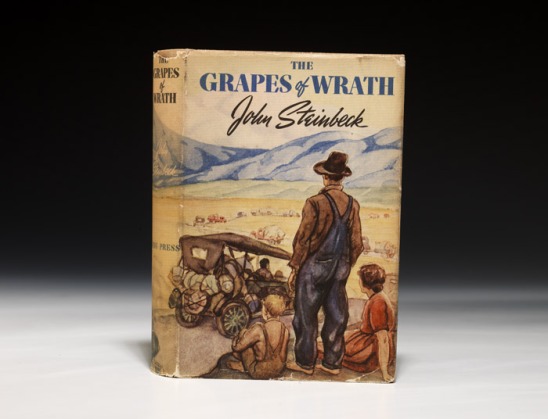 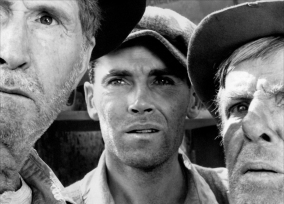 The narrative begins just after Tom Joad is paroled from McAlester prison, where he had been incarcerated after being convicted of homicide. While hitchhiking to his home near Sallisaw, Oklahoma, Tom meets former preacher Jim Casy, whom he remembers from his childhood, and the two travel together. When they arrive at Tom’s childhood farm home, they find it deserted. Disconcerted and confused, Tom and Casy meet their old neighbor, Muley Graves, who tells them the family has gone to stay at Uncle John Joad’s home nearby. Graves tells them that the banks have evicted all the farmers, but he refuses to leave the area.

The next morning, Tom and Casy go to Uncle John’s. Tom finds his family loading their remaining possessions into a Hudson sedan converted into a truck; with their crops destroyed by the Dust Bowl, the family has defaulted on their bank loans, and their farm has been repossessed. The family sees no option but to seek work in California, which has been described in handbills as fruitful and offering high pay. The Joads put everything they have into making the journey. Although leaving Oklahoma would violate his parole, Tom decides it is worth the risk, and invites Casy to join him and his family.

Traveling west on Route 66, the Joad family finds the road crowded with other migrants. In makeshift camps, they hear many stories from others, some returning from California, and the group worries that California may not actually be as promising as it seems. The family dwindles as well: Grandpa dies along the road, and they bury him in a field; Grandma dies close to the California state line; and both Noah (the eldest Joad son) and Connie Rivers (the husband of the pregnant Joad daughter, Rose of Sharon) leave the family. Led by Ma, the remaining members realize they can only continue, as nothing is left for them in Oklahoma.

Reaching California, they find the state oversupplied with labor; wages are low, and workers are exploited to the point of starvation. The big corporate farmers are in collusion and smaller farmers suffer from collapsing prices. Weedpatch Camp, one of the clean, utility-supplied camps operated by the Resettlement Administration, a New Deal agency, offers better conditions but does not have enough resources to care for all the needy families. Nonetheless, as a Federal facility, the camp protects the migrants from harassment by local deputies.

How can you frighten a man whose hunger is not only in his own cramped stomach but in the wretched bellies of his children? You can’t scare him – he has known a fear beyond every other.

In response to the exploitation, Casy becomes a labor organizer and tries to recruit for a labor union. The remaining Joads find work as strikebreakers in a peach orchard, where Casy is involved in a strike that eventually turns violent. When Tom witnesses Casy’s fatal beating, he kills the attacker and flees as a fugitive. The Joads quietly leave the orchard to work at a cotton farm, where Tom remains at risk of being arrested for the homicide.

Knowing he must leave the area or risk being caught and his family blacklisted from working, Tom bids his mother farewell and vows to work for the oppressed. The rest of the family continues to pick cotton and pool their daily wages so they can buy food. Rose of Sharon’s baby is stillborn. Ma Joad remains steadfast and forces the family through the bereavement. With the winter rains, the Joads’ dwelling is flooded and the car disabled, and they move to higher ground. In the final chapter of the book, the family takes shelter from the flood in an old barn. Inside they find a young boy and his father, who is dying of starvation. Rose of Sharon takes pity on the man and offers him her breast milk to save him from starvation.

The book was quickly made into a famed 1940 Hollywood movie of the same name directed by John Ford and starring Henry Fonda as Tom Joad. The first part of the film version follows the book fairly accurately. However, the second half and the ending, in particular, differ significantly from the book. John Springer, author of The Fondas (Citadel, 1973), said of Henry Fonda and his role in The Grapes of Wrath: “The Great American Novel made one of the few enduring Great American Motion Pictures.”

The documentary American: The Bill Hicks Story (2009) revealed that The Grapes of Wrath was comedian Bill Hicks’ favorite novel. He based his famous last words on Tom Joad’s final speech: “I left in love, in laughter, and in truth, and wherever truth, love and laughter abide, I am there in spirit.”

In July 2013, Steven Spielberg announced his plans to direct a remake of The Grapes of Wrath for DreamWorks.

Woody Guthrie’s two-part song— “Tom Joad – Parts 1 & 2” – from the album Dust Bowl Ballads (1940), explores the protagonist’s life after being paroled from prison. It was covered in 1988 by Andy Irvine, who recorded both parts as a single song—”Tom Joad”—on Patrick Street’s second album, No. 2 Patrick Street.

The song “Here Comes that Rainbow Again” by Kris Kristofferson (1981) is based on the scene in the roadside diner where Pa Joad buys a loaf of bread and two candy sticks for Ruthie and Winfield.

The band The Mission UK included a song titled “The Grapes of Wrath” in their album Carved in Sand (1990).

The progressive rock band Camel released an album, titled Dust and Dreams (1991), inspired by the novel.

Rage Against the Machine recorded a version of “The Ghost of Tom Joad” in 1997.

An opera based on the novel was co-produced by the Minnesota Opera, and Utah Symphony and Opera, with music by Ricky Ian Gordon and libretto by Michael Korie. The opera made its world premiere in February 2007, to favorable local reviews.

Bad Religion have a song entitled “Grains of Wrath” on their album New Maps of Hell (2007). Bad Religion lead vocalist Greg Graffin is a fan of Steinbeck’s.

Pink Floyd’s song “Sorrow”, written by David Gilmour, from the album A Momentary Lapse of Reason, is thematically derived from/based on the novel.

The Steppenwolf Theatre Company produced a stage version of the book, adapted by Frank Galati. Gary Sinise played Tom Joad for its entire run of 188 performances on Broadway in 1990. One of these performances was filmed and shown on PBS the following year.

In 1990, the Illegitimate Players theater company in Chicago produced Of Grapes and Nuts, an original, satirical mash-up of The Grapes of Wrath and Steinbeck’s acclaimed novella Of Mice and Men.