Today is the 88th birthday of the artist Fernando Botero. Is art and subjects are immediately recognizable and that is what makes him one of the most interesting living artists. The world is a better place because he was in it. 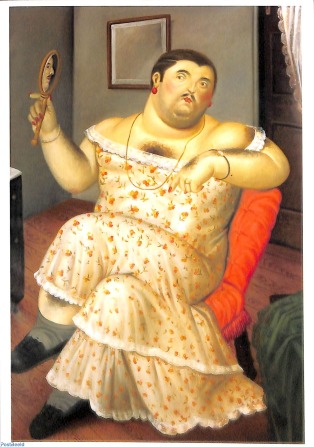 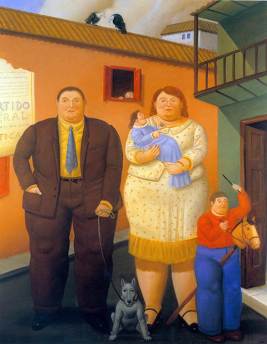 BEST KNOWN FOR: Fernando Botero is a Colombian artist known for creating bloated, oversized depictions of people, animals and elements of the natural world.

Born in Medellin, Colombia, on April 19, 1932, Fernando Botero attended a matador school for several years in his youth, and then left the bull ring behind to pursue an artistic career. Botero’s paintings were first exhibited in 1948, when he was 16 years old, and he had his first one-man show two years later in Bogota.

Botero’s work in these early years was inspired by pre-Colombian and Spanish colonial art and the political murals of Mexican artist Diego Rivera. Also influential were the works of his artistic idols at the time, Francisco de Goya and Diego Velázquez. By the early 1950s, Botero had begun studying painting in Madrid, where he made his living copying paintings hanging in the Prado and selling the copies to tourists.

Throughout the 1950s, Botero experimented with proportion and size, and he began developing his trademark style—round, bloated humans and animals—after he moved to New York City in 1960. The inflated proportions of his figures, including those in Presidential Family (1967), suggest an element of political satire, and are depicted using flat, bright color and prominently outlined forms—a nod to Latin-American folk art. And while his work includes still-lifes and landscapes, Botero has typically concentrated on his emblematic situational portraiture.

After reaching an international audience with his art, in 1973, Botero moved to Paris, where he began creating sculptures. These works extended the foundational themes of his painting, as he again focused on his bloated subjects. As his sculpture developed, by the 1990s, outdoor exhibitions of huge bronze figures were staged around the world to great success.

In 2004, Botero turned to the overtly political, exhibiting a series of drawings and paintings focusing on the violence in Colombia stemming from drug cartel activities. In 2005, he unveiled his “Abu Ghraib” series, based on reports of American military forces abusing prisoners at the Abu Ghraib prison during the Iraq War. The series took him more than 14 months to complete, and received considerable attention when it was first exhibited in Europe.

Fernando Botero has been married three times, having wed current wife, Greek artist Sophia Vari, in the mid-1970s. He has several children as well, with one son having died as a child during a car accident. Botero continues to exhibit his works around the world.