Today is the 113th birthday of Rosalind Russell.  Suggesting any one of her films to watch is in no way discounting any of the others. I adore The Women, His Girl Friday, Gypsy, and Mrs. Pollifax – Spy, just for starters.  You may have your own, it is hard to not have at least a couple.  The world is a better place because she was in it and still feels the loss that she has left. 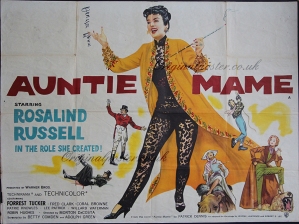 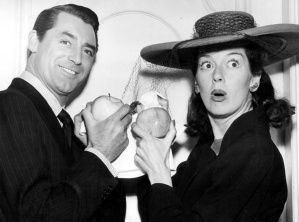 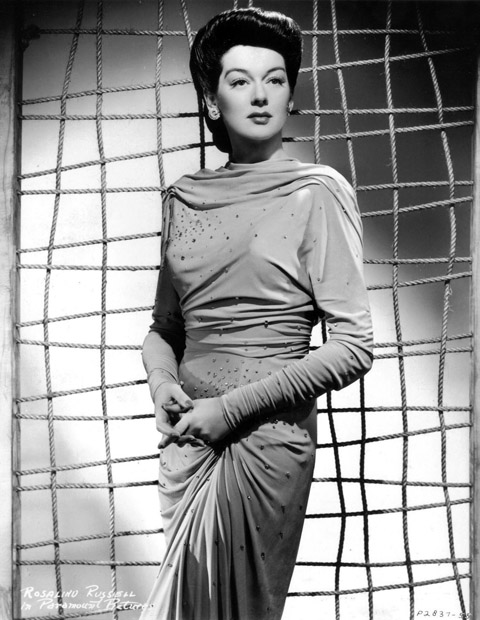 BEST KNOWN FOR: Theater and film actress Rosalind Russell costarred in His Girl Friday with Cary Grant, and played Auntie Mame in both the Broadway play and the movie version.

Rosalind Russsell was born on June 4, 1907, the fourth of seven children, in Waterbury, Connecticut. She was named after the S.S. Rosalind, on which her parents had voyaged. Her father, a lawyer, was from an Irish Catholic family and Rosalind went to the Catholic Marymount College in New York, before going on to train at the American Academy of Dramatic Arts in New York City.

After doing work as a fashion model she started her stage career in her early twenties, appearing in stock company productions and some minor roles in Broadway plays before she was offered a contract first with Universal Pictures and then swiftly signing for the pre-eminent studio, MGM.

She made her screen debut with a large role as part of the love triangle in ‘Evelyn Prentice’ in 1934, co-starring William Powell and Myrna Loy. For the rest of the decade she worked hard, appearing in numerous movies including many comedies, such as ‘Forsaking All Others’ in 1934 and ‘Four’s a Crowd’ in 1938 and although fine in serious drama she was clearly built for comedy, with her wide, expressive eyes and constantly mobile body, her performances frequently threatening to go over the top but skillfully reigned in at the last moment. She appeared in dramas also, including ‘Craig’s Wife’ in 1936 and ‘The Citadel’ in 1938 but she was rarely the first choice for anything, and was used by MGM as a first reserve in case Myrna Loy’s salary demands got out of hand.

In 1939 came one of her most celebrated roles when she was cast as the catty Sylvia Fowler, the bitchiest of ‘The Women’, directed by George Cukor, an all female comedy in which she manages to steal scenes from such illustrious names as Norma Shearer, Joan Crawford, and Paulette Goddard, sometimes simultaneously. The movie was a major critical and box-office success which considerably boosted her career and further established her reputation as a comic actress.

In 1940 came another celebrated comic role, that of Hildy Johnson in Howard Hawks’s classic screwball comedy, ‘His Girl Friday’. It is hard to imagine another actress attempting the character with such authority and abandon as she gives one of her finest performances as the ace reporter who is at her happiest trading wisecracks with the boys in the pressroom.

The 1940’s was a prolific decade for Rosalind as she continued to appear in successful comedy movies such as ‘The Feminine Touch’ in 1941, ‘Take a Letter Darling’ in 1942 and ‘Tell It to the Judge’ in 1949, and she received three of her four Academy Award for Best Actress nominations during this period. The first was for ‘My Sister Eileen’ in 1942 an offbeat comedy featuring her as the older, plainer sister of perky blonde, Janet Blair. Then in 1946 for ‘Sister Kenny’ as an Australian nurse and another ambitious and successful dramatic role in 1947 for ‘Mourning Becomes Electra’.

In the 1950’s Rosalind returned to the Broadway stage and found success in an unexpected new genre, the musical comedy, when she reprised her earlier movie role from ‘My Sister Eileen’ in the renamed ‘Wonderful Town’ in 1953, for which she received a Tony Award. The theater continued to be the mainstay of her career at this time with occasional TV appearances and movies, notably her portrayal of a teacher in ‘Picnic’ in 1955.

Rosalind’s most famous role of all, in both theater and movies, came in the title role of the long-running stage hit ‘Auntie Mame’ and the subsequent 1958 movie version, in which she played an unconventional aunt whose orphan nephew comes to stay. The movie earned her a Golden Globe award and her fourth Academy Award Best Actress nomination.

She married once, in October, 1941, to Danish-American producer Frederick Brisson, whom she met through Cary Grant when they were filming ‘His Girl Friday’ and they had one son. Their marriage lasted 35 years ending with her death in 1976.

Russell suffered from rheuamatoid arthritis and she devoted her last years to campaigning for arthritis research. In 1972 the Academy of Motion Picture Arts and Sciences awarded her the Jean Hersholt Humanitarian Award for her charity work.

Rosalind Russell died in 1976 from breast cancer. She was 69. She is buried at Holy Cross Cemetery, Culver City, California.