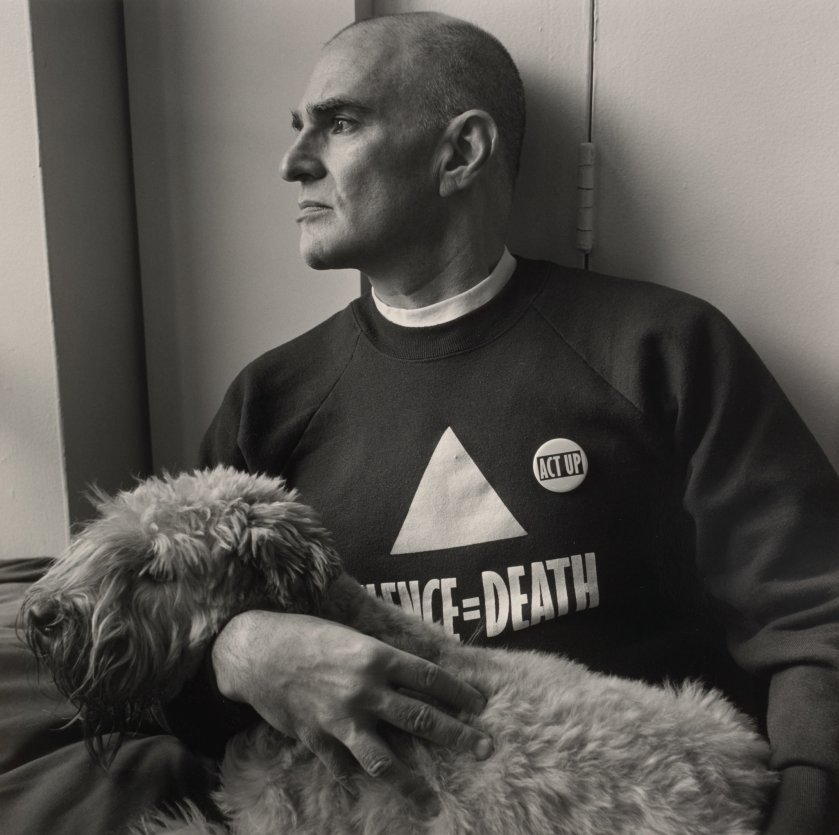 Today is the 85th birthday of the playwright Larry Kramer. He fought the good fight. Now it is our turn. Do not let him down. The world is a better place because he was in it and still feels the loss that he has left.

Kramer, the second son of a lawyer and his wife, a Red Cross official—spent his childhood in Mount Rainier, Maryland. The family moved to Washington, D.C., in 1950. In 1953 he entered Yale University. Alienated because of his homosexuality, Kramer attempted suicide his first semester. Later that school year, he had his first homosexual relationship, a brief affair with a German professor. He ultimately found a niche in the glee club and appeared in campus theatre productions. With the assistance of his mother and his brother, he began receiving psychoanalytic treatment, a move that he credited with saving his life.

Kramer graduated from Yale with a bachelor’s degree in English in 1957. He then served in the U.S. Army Reserves for six months before obtaining a position in the mail room of the William Morris Agency in 1958. He moved to a position as teletype operator and copywriter at Columbia Pictures six months later. After a period of study with Sydney Pollack at the Neighborhood Playhouse and a stint at the Cambridge Drama Festival, he returned to Columbia, that time as a reader who examined the viability of scripts and books that might be optioned for screen adaptation. In 1961 he moved to London to set up a story department for Columbia. During that period he assisted in the production of such notable films as Lawrence of Arabia (1962) and Dr. Strangelove; or, How I Learned to Stop Worrying and Love the Bomb (1964).

In 1965 he was hired as an assistant to the president of United Artists and soon moved into the role of associate producer on Here We Go Round the Mulberry Bush (1968), the script for which he helped to adapt from Hunter Davies’ novel of teenage sexual experimentation. Kramer then produced and wrote the screenplay for Women in Love (1969), an adaptation of the D.H. Lawrence novel directed by Ken Russell. He received an Academy Award nomination for best adapted screenplay. His final screenwriting effort—a musical adaptation (1973) of an earlier movie (1937) based on James Hilton’s Lost Horizon (1933)—though poorly received, was highly remunerative. With assistance from his brother, Arthur, a successful lawyer, Kramer invested the proceeds, which allowed him to concentrate on his own writing.

After settling in New York City in 1972, Kramer turned to theatrical drama. The first of his efforts to be produced was a play about four college friends, three heterosexual and one homosexual. The drama, initially performed as Sissies’ Scrapbook (1973) and later as Four Friends (1974), did not earn favorable notices. Disenchanted by the experience, Kramer applied his talents to narrative fiction instead, penning the novel Faggots (1978), about a middle-aged gay man’s search for love in the hedonistic milieu of New York City in the 1970s. Though criticized by some gay men for its nihilistic assessment of gay sexual and romantic behavior and by social conservatives for its graphic depictions of homosexual intercourse, the novel was ultimately a critical and commercial success.

Kramer found a new calling in activism in July 1981, following the announcement of an outbreak of Kaposi sarcoma, a form of cancer that was eventually attributed to AIDS, among gay men in New York and California. As gay friends and associates began succumbing to the then-mysterious illness, Kramer set off in pursuit of a solution. Bureaucratic, medical, and political inertia, abetted by social prejudice against homosexuality, had resulted in an inadequate response to the AIDS crisis, with long waiting lists for trial treatments and often astronomical financial burdens. In August 1981 Kramer convened a group of interested parties, including one of the doctors who had initially noted the phenomenon, in order to devise a strategy for combatting the disease. The group officially became the Gay Men’s Health Crisis (GMHC) in early 1982.

Kramer’s position within the group was uneasy from the start. Though he was encouraged by the network that developed to care for men beset by the disease, many of whom could not pay for medical treatment, he grew impatient with what he viewed as the group’s political timidity. He gained a reputation for aggressive and accusatory rhetoric, which he directed at the government and corporate entities to whose inaction and apathy he attributed the rapid spread of the epidemic. His March 1983 editorial in the gay publication New York Native, “1,112 and Counting,” perhaps epitomized his style. In the 5,000-word screed, he fulminated against the apparent unwillingness of the National Institutes of Health (NIH) to release funding for research, New York City Mayor Ed Koch’s perceived apathy toward the outbreak, the unfairness of health insurance protocols, and what he characterized as the irresponsible sexual behaviour of other gay men. When in April 1983 he was not invited to a GMHC meeting with Koch to discuss the disease, he resigned from the group, with little objection from its leadership, who viewed him as a loose cannon. Notably, Kramer had referred to Koch and other government and medical officials whose attention to the problem he deemed insufficient as “murderers.” One such person—Anthony Fauci of the National Institute of Allergy and Infectious Diseases (NIAID), a branch of the NIH—ultimately became an ally who invited AIDS activists to participate in NIH proceedings, from which they had previously been barred.

At a community meeting in March 1987, Kramer issued a rallying cry for more-direct action, which resulted in the formation of the AIDS Coalition to Unleash Power (ACT UP). The organization used protests and demonstrations to raise awareness about HIV/AIDS and combat the political and economic forces impeding the development of effective treatment. Later that month Kramer and other ACT UP activists planned and executed a blockade of Wall Street after the HIV drug azidothymidine (AZT) was approved with extraordinary speed by the U.S. Food and Drug Administration (FDA), patented by the drug company Burroughs-Wellcome, and prescribed at an annual cost of some $10,000—effectively establishing a lucrative monopoly—while other drugs were left to languish in the FDA’s decade-long approval process. The group, which quickly grew in numbers, organized an attempt to enter FDA headquarters in October 1988 in an effort to call attention to the agency’s slow approval for other, much-needed, experimental drugs as well. ACT UP again targeted Burroughs-Wellcome in September 1989 when a small group of activists snuck into the New York Stock Exchange and chained themselves to a railing after having hung a banner encouraging the sale of Burroughs-Wellcome shares. They were supported by more than 1,000 activists outside, who distributed flyers encouraging the same. The tactic was credited with the lowering of the price of AZT by some $4,000. That December ACT UP activists occupied St. Patrick’s Cathedral in New York City to protest the Roman Catholic Church’s positions on homosexuality and prophylactics, a move celebrated by Kramer, a longtime critic of the officiating cardinal, John O’Connor.

Kramer dramatized his experiences as an AIDS activist in the play The Normal Heart (1985; television film 2014), which centers on Ned Weeks, a vociferous and abrasive activist whose lover is dying of AIDS during the early years of the outbreak. The star of the original production, Brad Davis, committed suicide because of AIDS complications in 1991. The 2014 HBO adaptation won an Emmy Award for best television movie. Kramer later wrote a sequel, The Destiny of Me (1992), which depicted Weeks’s own battle with the disease. (Kramer was himself diagnosed with the HIV virus in 1988, though the virus never developed into AIDS.) Just Say No: A Play About a Farce (1988) was a barbed takedown of U.S. Pres. Ronald Reagan, to whose inattention to the AIDS crisis Kramer attributed its unnecessary escalation. Kramer’s writings on AIDS in The New York Times, Village Voice, and other publications were collected as Reports from the Holocaust: The Making of an AIDS Activist (1989). The American People, Volume 1: Search for My Heart (2015) is a revisionist history novel that posits the homosexuality of numerous figures from the American pantheon, from George Washington and Alexander Hamilton to Abraham Lincoln and Herbert Hoover. Though modern scholarship substantiated some of Kramer’s claims, historians cast doubt on others. The American People, Volume 2: The Brutality of Fact appeared in 2020.

In December 2001 Kramer underwent a liver transplant, replacing an organ ravaged by a hepatitis B infection. In 2001 Arthur Kramer endowed the Larry Kramer Initiative for Lesbian and Gay Studies (2001–06) at Yale following a long-standing effort by Larry to do the same with his own money. Yale had previously rejected the offer. Kramer donated his papers to the university’s Beinecke Rare Book & Manuscript Library. In 2013 he married architect David Webster in a New York hospital, where he had just undergone abdominal surgery to remove a bowel obstruction. His life and career were chronicled in the documentary Larry Kramer in Love & Anger (2015).

In 1996 Kramer received the American Academy of Arts and Letters Award for Literature.