Today is the 70th birthday of the actress Shelley Duvall.  Have you seen Bernice Bobs Her Hair or The Shining?  They couldn’t be more different and exemplify her range and talent.  The world is better off because she is in it. 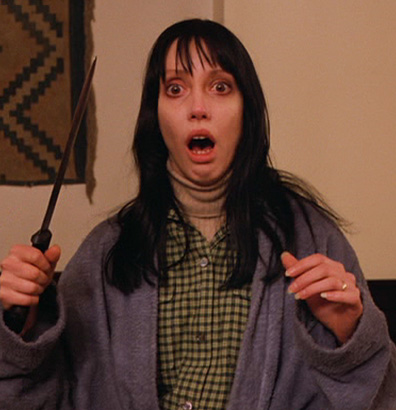 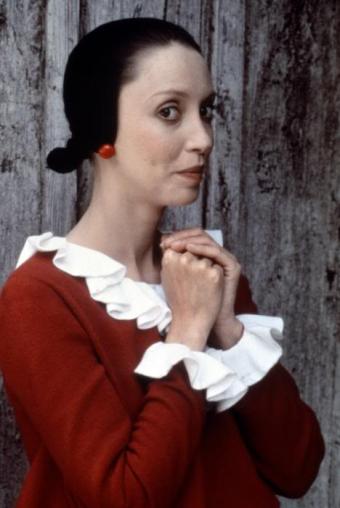 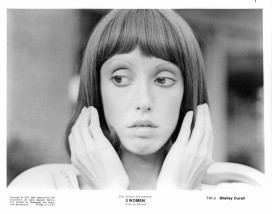 BEST KNOWN FOR: Well regarded for her ability to portray quirky and eccentric characters, actress Shelley Duvall has starred in Thieves Like Us, Popeye and The Shining, among other films.

Born in Houston, Texas, on July 7, 1949, actress Shelley Alexis Duvall was one of Bobbie and Robert Duvall’s four children, and their only daughter. By her own account, Duvall was an artistic girl with lots of energy, whom her mother eventually nicknamed “Manic Mouse.” “I was a little terror sometimes!” Duvall said in a 2012 interview. “I used to run around a lot, tipping things over.”

Duvall graduated from Waltrip High School in 1967, and then enrolled at South Texas Junior College, where she studied nutrition and diet therapy. To help pay for school, Duvall worked as a cosmetics salesperson at a local department store.

Her acting career began by accident. In 1969, while attending an engagement party for a Houston artist, Duvall was spotted by a pair of location scouts, who had been hired by director Robert Altman for his upcoming film, Brewster McCloud (1970).

Though Duvall’s acting background was somewhat limited—she’d performed in a handful of high school plays—Altman was intrigued by Duvall’s unique looks, most notably her large eyes, lanky build, and engaging, toothy smile, and offered Duvall a part in his new film. Duvall accepted and went on to portray a Houston Astrodome usher and the love interest of the film’s main character, Brewster McCloud.

Despite its poor reception, Brewster McCloud launched Duvall’s career and set in motion a working relationship with Altman that would benefit them both in the coming years. The pair collaborated on Altman’s next film, McCabe and Mrs. Miller (1971), and then later in Thieves Like Us (1974), Nashville (1975) and 3 Women (1977).

With each film, Duvall’s acting blossomed. Woody Allen soon became a fan, and cast her to play his one night stand in the Oscar-winning, Annie Hall (1977), which also starred Diane Keaton.

By the late 1970s, Duvall was a respected and well-known Hollywood actress. In 1979, she reconnected with Altman again for the live-action version of Popeye. The film, which starred Robin Williams as the title character and Duvall as his beloved Olive Oyl, was one that Duvall was at first hesitant to embrace, because she has been teased as an Olive Oyl look-alike while growing up. Eventually, though, Duvall changed her mind and her performance helped solidify the film’s success.

In 1980 Duvall took on the role of the bumbling and innocent Wendy Torrance in Stanley Kubrick’s The Shining, starring Jack Nicholson. Working under Kubrick, Duvall later recalled, was the most challenging and rewarding experience of her acting life. “The first few weeks shooting were so much fun and we all got along great,” Duvall recalled. “So, when it came to shooting a serious scene, whether it be looking shocked or terrified, I couldn’t do it. I would start giggling. After a while Stanley became impatient with me, and just let loose. And that terrified me! But you have to understand, some scenes take hours to make, sometimes, a whole 12 hour shooting day would only translate to being three minutes on screen. So you go into a scene acting terrified or cying, and by the end of the day you just don’t have anything more to give, [but] there is the genius of Stanley Kubrick. He gets it out of you. But it was very tough and grueling.”

Duvall also brought her talents to the small screen. Perhaps most notably in Berrnice Bobs Her Hair, part of PBS’s Great American Short Story Series. In the 1990s, Duvall took on a number of guest roles in programs such as NBC’s Frasier and ABC’s Aliens for Breakfast.

In addition to her on-screen work, Duvall has also become a respected children’s show producer. In 1982, she formed her own production company, Platypus Productions, and went on to create two award-winning programs for Showtime: Faerie Tale Theatre and Shelley Duvall’s Tall Tales and Legends.

Since the 1990s, Duvall’s acting career has been largely quiet. Tired of the rush and mayhem of city life in Los Angeles, Duvall returned to Texas, where she has effectively retired and settled into a life raising animals and enjoying the quiet. “I write a lot of poetry,” she has said. “Would love to publish a book of my work one day.” That doesn’t mean, however, that Duvall has ruled out a return to her acting career. “I still get a lot of scripts sent to me,” she has said. “A return to acting is never out of the question.”