Today is the 72nd birthday of the fitness guru Richard Simmons. He has inspired hundreds of thousands of people to be more active in their lives. I think everyone hopes he is happy and well, wherever he is. 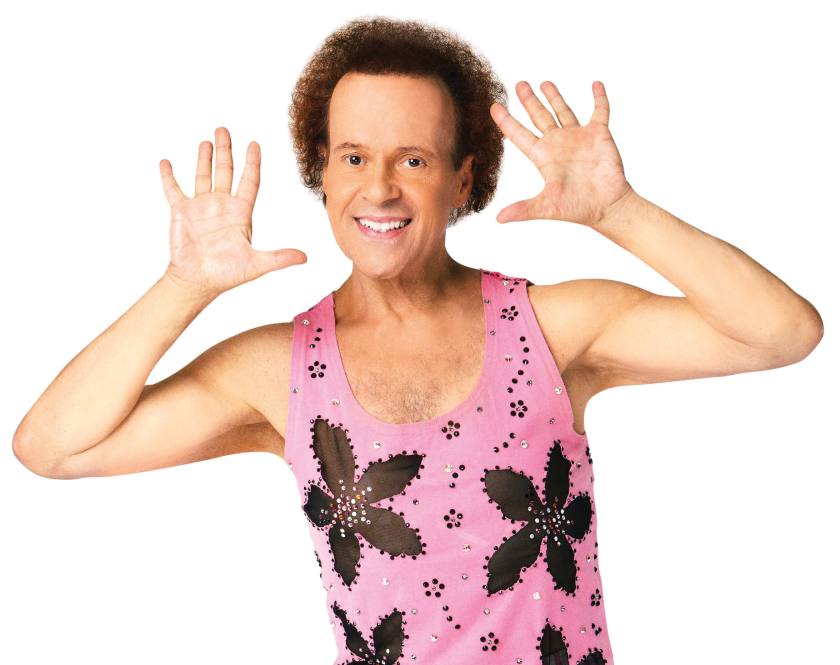 BEST KNOWN FOR: Richard Simmons is an American fitness and TV personality best known for his high-energy health and fitness programs and books.

Born Milton Teagle Simmons on July 12, 1948, in New Orleans, Louisiana, Richard Simmons was a severely overweight child. He battled obesity for a number of years, becoming dependent on diet pills and adopting unhealthy weight loss programs. He briefly lived in Italy before relocating in 1973 to Los Angeles, California, where he opened an innovative exercise studio that catered to the severely overweight.

In 1979, Simmons enjoyed a brief stint on the popular daytime soap opera General Hospital, but soon decided to concentrate solely on building a fitness empire. The following year, he launched his own talk show, The Richard Simmons Show, which enjoyed four seasons on the air. He successfully marketed his image to the public while writing self-help books, creating the “Deal-A-Meal” food maintenance program and producing the Sweatin’ to the Oldies line of exercise videos.

Over the years, Simmons became a staple on late night television, bringing his irreverent humor and indefatigable energy to The Tonight Show with Jay Leno and Late Night with David Letterman. With a rigorous touring schedule that included 250 personal appearances each year, promoted physical well-being to millions of loyal followers.

Simmons also established exercise programs for the physically challenged, which he documented in the book Reach for Fitness: A Special Book of Exercises for the Physically Challenged. His other writings range from cookbooks Richard Simmons: Never Say Diet Book and The Richard Simmons’ Farewell to Fat Cookbook: Homemade in the U.S.A.; to self-help guides such as Richard Simmons’ Never Give Up: Inspirations, Reflections, Stories of Hope; to an autobiography, Still Hungry After All These Years: My Story.

Simmons dropped out of the spotlight around 2014. He became so reclusive that friends became very worried about the exercise guru and numerous reports of possible problems with Simmons soon surfaced. TMZ ran a story in early 2015 about the Los Angeles Police doing a welfare check on Simmons and found him to be okay.

In 2016, stories circulated about Simmons being held hostage in his own home by his longtime housekeeper. Simmons himself has refuted this claim in a telephone interview with the Today show that March. “I just sort of wanted to be a little bit of a loner for a little while,” he explained. Simmons added that he had been suffering from knee problems “because I’ve taught like thousands and thousands of classes, and you know right now I just want to sort of take care of me.”

In June 2016 Simmons was admitted to the hospital for what was reportedly a case of dehydration. In 2017, Missing Richard Simmons, a weekly podcast by Dan Taberski, a former producer of The Daily Show with Jon Stewart and a former student of Simmons, explored the fitness guru’s retreat from public life. The hit podcast renewed interest in Simmons’ life and well-being.

According to People magazine, the Los Angeles Police Department checked in on Simmons to investigate an allegation that he was being held against his will. “There was something about his housekeeper holding him hostage and not allowing people to see him and preventing him from making phone calls and it was all garbage and that’s why we went out to see him. None of it is true,” LAPD Detective Kevin Becker commented to People. “The fact of the matter is we went out and talked to him. He is fine, nobody is holding him hostage. He is doing exactly what he wants to do. If he wants to go out in public or see anybody he will do that.”

Simmons’ publicist also reported to CNN that “everything is fine.”