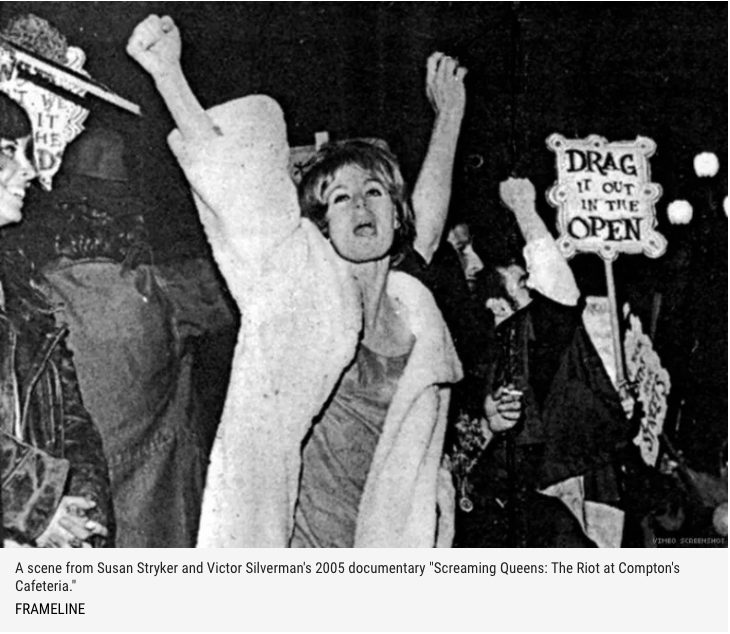 In the 1960s Gene Compton’s cafeteria in San Francisco’s seedy Tenderloin neighborhood was one of the few places that hustlers, street kids and transgender sex workers could go late at night. But staffers frequently called the police, who would harass customers and arrest the women for “impersonating a female.”

When an officer manhandled a trans woman during an raid in 1966, she threw coffee in his face and the scene erupted into chaos, as a crowd of 60 began throwing dishes and furniture at the police. Rioters smashed the restaurant’s windows, chased police into the street and destroyed a patrol car. A nearby newsstand was set on fire.

In the end, dozens of people were thrown into paddy wagons.

The next night, a picket was held outside Compton’s, which refused to allow transgender customers back in. One of the first protests against police violence aimed at transgender people, it ended with the restaurant’s re-installed plate-glass windows being smashed again.

Still, the city met with protestors and, in 1968, the National Transsexual Counseling Unit [NTCU] was established. It was overseen by SFPD Sergeant Elliott Blackstone, the first police officer in America to serve as a liaison to the “homophile” community.