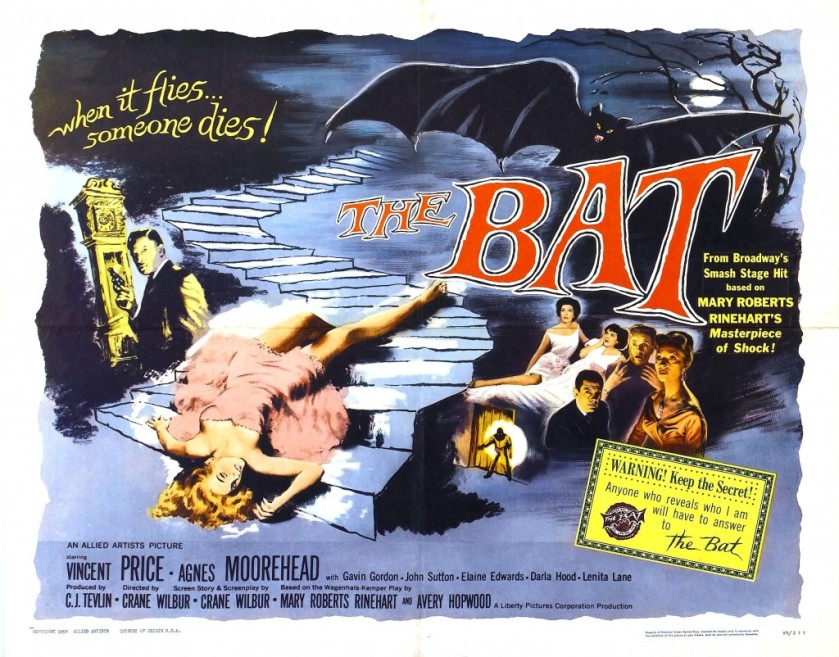 Sixty-one years ago today, the film The Bat premiered. I am a sucker for any film staring Agnes Moorehead. Due to a copyright issue, it is available below in it’s entirety.

Cornelia Van Gorder (Agnes Moorehead) is a mystery author who rents a summer home in a small town from local bank president John Fleming (Harvey Stephens). Over $1 million in negotiable securities is discovered missing from the bank while Fleming is on a hunting trip with his physician, Dr. Malcolm Wells (Vincent Price). In a cabin in the woods, Fleming confesses to Wells that he stole the securities. He offers to split the money with Wells in return for help faking his own death and threatens to kill him if he doesn’t agree to help. When a forest fire breaks out nearby, Wells shoots Fleming and uses the fire to cover up the murder.

Meanwhile, the town is being terrorized by a mysterious murderer known as “the Bat”. The Bat is said to be a man with no face who murders women at night by ripping out their throats with steel claws. Van Gorder’s maid Lizzie (Lenita Lane) tells her that most of the household servants have quit in fear of the Bat. As they lock up the house, Lizzie sees the Bat’s clawed hand reaching through an unlocked door. Van Gorder calls the police, who promise to send officers to investigate. The Bat breaks into the house and releases a bat, which bites Lizzie. Lizzie fears she may have contracted rabies. Van Gorder calls for Dr. Wells to treat the bite.

Wells is in his laboratory, doing experiments on bats. The local chief of detectives, Lieutenant Andy Anderson (Gavin Gordon), is watching through a window. When Wells leaves to answer Van Gorder’s call, Anderson breaks into the laboratory and searches it. Wells checks Lizzie’s wound and catches the bat that bit her. Anderson arrives shortly after and says an officer will watch the house for the rest of the night.

Van Gorder is visited by Wells, Dale Bailey (Elaine Edwards), and Judy Hollander (Darla Hood). Dale’s husband, Victor Bailey (Mike Steele), is a clerk at the bank and a suspect in the theft of the securities; Judy works at the bank and is a witness in his defense. While Anderson is visiting Mark Fleming (John Bryant), the nephew and heir of John Fleming, Van Gorder has Dale call him about blueprints that may show a hiding place in the house. He promises to help her look for them that evening. While Van Gorder, Judy, and Dale are having dinner, Mark sneaks into the house to look for the blueprints on his own. The Bat kills him and takes the blueprints. Anderson and Wells (who is the local coroner) arrive to investigate the murder. Anderson questions the women and Van Gorder’s new butler, Warner (John Sutton). Anderson tells the women to lock themselves into their rooms for the rest of the night; he will stay to watch for the Bat.

After the women go to bed, Anderson goes into the woods behind the house with a flashlight; Warner follows him. Soon after, the Bat enters the house again. He cuts the phone line and goes to the third floor, where he begins chiseling a hole into one of the walls. Hearing the noise from his chiseling, Dale and Judy go to investigate. The Bat kills Judy and flees the house. Anderson returns, saying he saw a man in the woods. He accuses Warner, whom he recognizes as a suspect for a robbery in Chicago. Warner says he was acquitted. Wells comes to the house, saying he had an accident in his car nearby; Anderson casts suspicion on him as well.

Van Gorder investigates the room the Bat was in, and realizes there is a secret room behind the wall where he was chiseling. She accidentally traps herself in the room, but is freed by Detective Davenport (Robert Williams), the officer assigned to watch the house that evening. Meanwhile, the Bat kills Wells in his laboratory and leaves a fake suicide note to frame Wells as the Bat. The Bat returns to Van Gorder’s house, where he sets the garage on fire to draw the occupants outside. Van Gorder sees through this ruse; she has Dale, Lizzie, and Davenport hide and wait for the Bat. When confronted, the Bat shoots and wounds (but not fatally) Davenport and is about to kill the others, when Warner returns and shoots him. Warner unmasks the Bat, who is revealed to be Lieutenant Anderson.