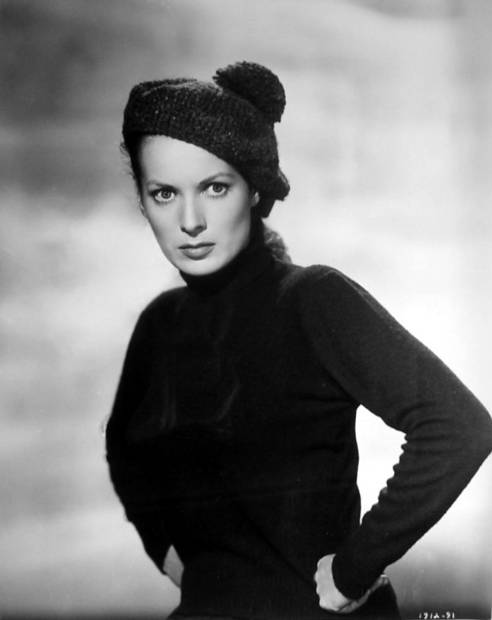 Today is the 100th birthday of the living Hollywood legend Maureen O’Hara.  Her career spans sixty full years, very few people can claim that, let alone in an industry as difficult to remain active in as filmmaking.  The world is a better place because she was in it and still feels the loss that she has left.

BEST KNOWN FOR: Maureen O’Hara was an Irish-born actress who was billed alongside Hollywood’s leading men in a slew of swashbuckling features in the 1940s.

Maureen FitzSimons was a pretty redheaded tomboy who learned judo, fenced, played soccer, and showed a keen interest in performing. She was accepted for drama classes at the prestigious Abbey Theater School when she was only 14, and sang and acted on Irish radio through her teens. Her parents knew, though, that performers rarely earned a decent living, so they made sure she spent most of her time studying bookkeeping and stenography.

At 17, she landed a tiny role in her first film, The Playboy, filmed in London. Strikingly beautiful and a natural in front of the cameras, she was almost immediately offered her first leading role, opposite Charles Laughton in Hitchcock’s Jamaica Inn. Laughton suggested her stage name, and she became Maureen O’Hara. He also invited her to accompany him Hollywood and play Esmerelda to his Quasimoto in The Hunchback of Notre Dame.

Already an established star at 19, O’Hara was one of Hollywood’s favorite leading ladies through the next two decades. She stood apart from other starlets by virtue of her eagerness to perform unladylike scenes — fistfights, swordplay, even pratfalls, but always with attitude and intelligence. As color films came into vogue, her distinctive, fiery red hair made her stand out even more — she was nicknamed “The Queen of Technicolor.” And of course, O’Hara proved the perfect leading lady for John Wayne, a woman who came across every bit as tough as he did, in their five films together.

In some of her best films, she played the coal miner’s daughter in love with preacher Walter Pidgeon inHow Green Was My Valley, the schoolmarm loved by Laughton in This Land is Mine, Natalie Wood’s mother in the Christmas classic Miracle on 34th Street, the housewife who hired famed butler-philosopher Mr Belvedere in Sitting Pretty with Robert Young, the Southern belle at odds with Wayne in Rio Grande, the Irish spinster he pursued in The Quiet Man, his estranged wife in McLintock, andHayley Mills’ mother in the original The Parent Trap with Brian Keith. She also starred in a 1960 TV remake of the critically-acclaimed Mrs Miniver that some critics claimed was better than the Greer Garson original.

In 1957, O’Hara joined with Liberace to sue Confidential magazine — the National Enquirer of its time. The magazine had announced in shrieking headlines that she had been seen in a passionate embrace with a mysterious Hispanic man in the back row at Grauman’s Chinese Theater, but O’Hara offered her passport as proof she had been out of the country at the time of any alleged tryst. And why was Liberace involved? In a separate article, the magazine had alleged that Liberace was — brace yourself — homosexual, but the famed pianist somehow proved he too had been defamed, andConfidential was eventually driven out of business.

O’Hara left Hollywood in the mid-1970s, but returned to cinema as John Candy’s ferociously overbearing mother in Only the Lonely, and also starred in a few TV movies through the 1990s. Her last performance was opposite Eric Stoltz, playing his high school Latin teacher in a terrific 2000 TV movie, The Last Dance. Now retired but still active, O’Hara frequently travels between her homes in Ireland, New York, California, and the Virgin Islands. Her autobiography, Tis Herself, was published in 2004.

Her father, Charles FitzSimons, was an Irish shopkeeper and something of a local celebrity, as part-owner of the Shamrock Rovers soccer team, which now plays in the Football League of Ireland. Her brother, Charles FitzSimons, was a TV producer whose credits include superhero sagas The Green Hornet with Bruce Lee and the 1970s Wonder Woman with Lynda Carter. Another brother, James, had a long but unremarkable career as a supporting actor; sometimes billed as James Lilburn and sometimes as James O’Hara; he played a priest in The Quiet Man and had a recurring role as a cop on TV’s Batman with Adam West.

At 19, O’Hara married George H. Brown, a film producer and occasional scriptwriter whose best works include the pre-Pearl Harbor call to war 49th Parallel with Laurence Olivier, and the first ofMargaret Rutherford’s delightful 1960s ‘Miss Marple’ mysteries, Murder She Said. Their marriage ended when O’Hara’s parents insisted on an annulment, and although they had been married for more than a year, publicity at the time stressed that their union “had not been consummated.” O’Hara’s second husband was director Will Price, who helmed her romp with the Marines in Tripoli, but they divorced after he took to the bottle. Her last husband was Charles Blair, a man sometimes described as a real-life John Wayne — a retired Air Force Brigadier General, test pilot, and pilot for Pan American Airways who had, in 1951, flown the first solo flight over the North Pole. After quitting Pan Am, Blair ran Antilles Airboats, a commuter airline in the Caribbean. After his death she took over the company, which made Maureen O’Hara the first woman to serve as president of an American airline.