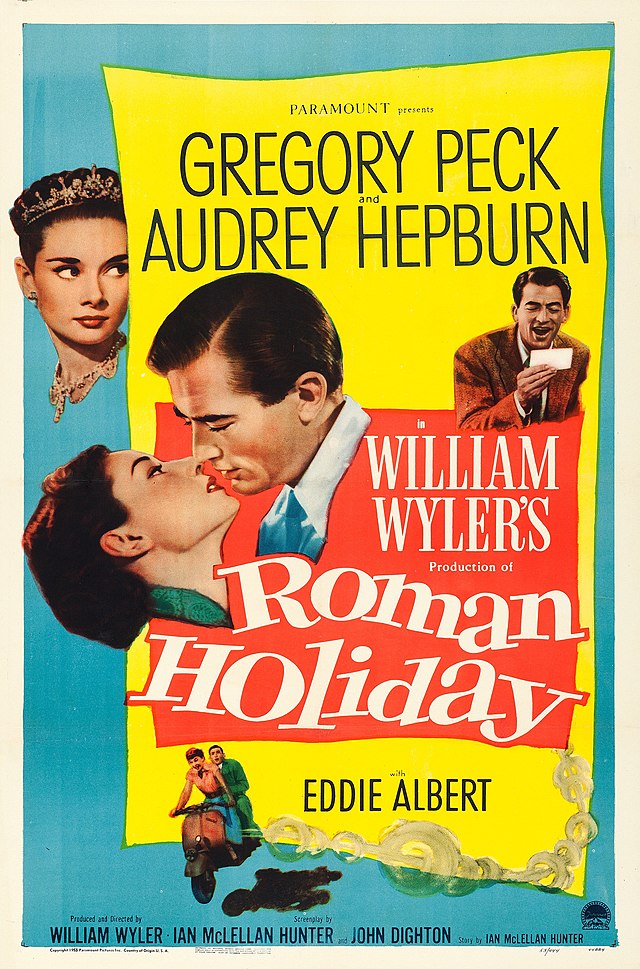 Sixty-seven years ago today, the film Roman Holiday premiered. Audrey Hepburn, Gregory Peck, Italy, Vespas. Is there anything more you would like? You need to watch this movie.

Ann, a crown princess from an unnamed European nation, is on a state visit to Rome, becomes frustrated with her tightly scheduled life, and secretly leaves her country’s embassy. The delayed effect of a sedative makes her fall asleep on a bench, where Joe Bradley, an expatriate reporter for the “American News Service”, finds her, without recognizing who she is. Thinking that she is intoxicated, Joe lets her spend the night in his apartment.

The next morning, Joe hurries off late to work and gives his editor, Mr. Hennessy, false details of his attendance at the princess’ press conference. When Hennessy informs him that the event had been cancelled, and shows him a news item about the princess’ “sudden illness”, he realizes who is asleep in his apartment. Seeing an opportunity, Joe privately calls his photographer friend, Irving Radovich, to ask him to secretly take pictures. Joe then tells Hennessy that he’ll get an exclusive wide-ranging interview with the princess and asks how much that would be worth. Hennessy offers to pay $5000 for the article, but bets Joe $500 that he won’t be able to get it.

Joe hurries home, and, hiding the fact that he is a reporter, offers to show his guest, “Anya”, around Rome. However, Ann declines Joe’s offer and leaves. Enjoying her freedom, she explores an outdoor market, buys a pair of shoes, observes the people and daily-life of Rome, and gets her long hair cut into a short style. Joe follows, and “accidentally” meets Ann on the Spanish Steps. This time, he convinces her to spend the day with him, and takes her to a street café, where he meets up with Irving. They visit the Mouth of Truth, where Joe tricks Ann into thinking that his hand has been bitten off, and later tour the Colosseum. When Anya tries to drive Joe on a Vespa through heavy Roman traffic they are all arrested, but Joe and Irving show their “fake” press passes and the group is set free.

That night, at a dance on a boat that her barber had invited her to, government agents called in by the embassy spot Ann and try to forcibly take her away. Joe, Irving, and the barber rush in to save her from the abductors, and Ann joins in the fight that breaks out. As police arrive and subdue the agents, Joe and Ann run away, but Joe is ambushed, falls into the river, and Ann jumps in to save him. They swim across and kiss as they sit shivering on the riverbank. Later at Joe’s apartment, while drying their wet clothes, they share tender bittersweet moments. Knowing that her royal responsibilities must resume, Ann asks Joe to drive her to a corner near the embassy, where they kiss again. She bids a tearful farewell, and returns to assume her duties as a princess.

Hennessy comes to Joe’s apartment, suspecting that the princess was not ill as claimed and that Joe was telling the truth about the interview. Joe, however, has decided not to write the story, although Irving arrives and is confused by the change of plans. Joe tells Irving that he is still free to sell his photographs. Joe and Irving then leave to attend the postponed press conference at the embassy and surprise Princess Ann.

Through vague public words, Joe assures Ann that no press exposure will come from their day together. At the end of the interview, the princess unexpectedly asks to meet the journalists, speaking briefly with each. As she reaches Joe and Irving, Irving presents her with his photographs as a memento of Rome. Joe and Ann then speak, with her final words to him being “so happy”. After Ann reluctantly departs, and the press leaves, Joe stays for awhile, and then walks away alone.