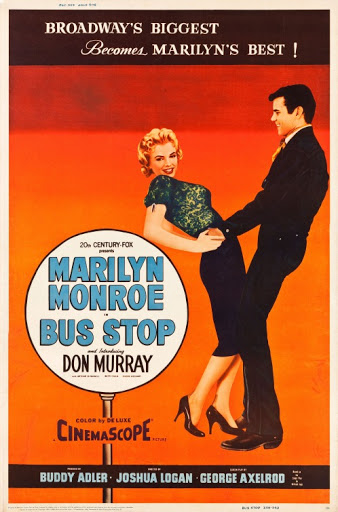 Sixty-seven years ago today, the film Bus Stop premiered. It one of the few non comedy, non musical movies that stars Marilyn Monroe, showing off her under-utilized range. You need to see this movie.

A naive, rambunctious, overly enthusiastic and socially inept cowboy, Beauregard Decker, and his friend and father-figure Virgil Blessing take the bus from Timber Hill, Montana to Phoenix, Arizona, to participate in a rodeo. Virgil has encouraged the 21-year-old virgin, Beau, to take an interest in “girls”. Initially reluctant and frightened of the idea, Beau declares that he hopes to find an “angel” and will know her when he sees her. Making trouble everywhere they go, he continues his unsophisticated behavior in Grace’s Diner. In Phoenix, at the Blue Dragon Cafe, he imagines himself in love with the café’s singer, Chérie, a talentless but ambitious performer from the Ozarks with aspirations of becoming a Hollywood star. Her rendition of “That Old Black Magic” entrances him and he forces her outside, despite the establishment’s rules against it, kisses her and thinks that means they are engaged. Chérie is physically attracted to him but resists his plans to take her back to Montana. She has no intention of marrying him and tells him so, but he is too stubborn to listen.

The next day, Beau gets a marriage license, and then takes an exhausted Cherie to the rodeo parade and the rodeo, where he rides the bucking bronco and then competes in the calf roping and the bull riding. Beau intends to marry Chérie at the rodeo, but she runs away. He tracks her down at the Cafe, where she jumps out a rear window and flees. Beau catches her, and forces her on the bus back to Montana. On the way, they stop at Grace’s Diner, the same place the bus stopped on the way to Phoenix. Chérie tries to make another getaway while Beau is asleep on the bus, but the road ahead is blocked by snow and the bus won’t be leaving at all. They are all stranded there. The bus driver Carl, the waitress Elma, and the café owner Grace by now all have learned that Beau is kidnapping and bullying the girl. Virgil and the bus driver fight him until he promises to apologize to Chérie and leave her alone. He, however, is unable to do so because he is humiliated about having been beaten.

The next morning, the storm has cleared and everybody is free to go. Beau finally apologizes to Chérie for his abusive behavior and begs her forgiveness. He wishes her well and prepares to depart without her. Chérie approaches him and confesses that she’s had many boyfriends and is not the kind of woman he thinks she is. Beau confesses his lack of experience to her. Beau asks to kiss her goodbye and they share their first real kiss. All Chérie wanted from a man was respect, which she had previously told the waitress when they sat together on the bus. This new Beau attracts Chérie. He accepts her past and this gesture touches her heart. She tells him that she will go anywhere with him. Virgil decides to stay behind. When Beau tries to coerce him to go with them, Chérie reminds him that he can’t force Virgil to do what he wants. Having finally apparently learned his lesson, Beau offers Chérie his jacket and gallantly helps her onto the bus.