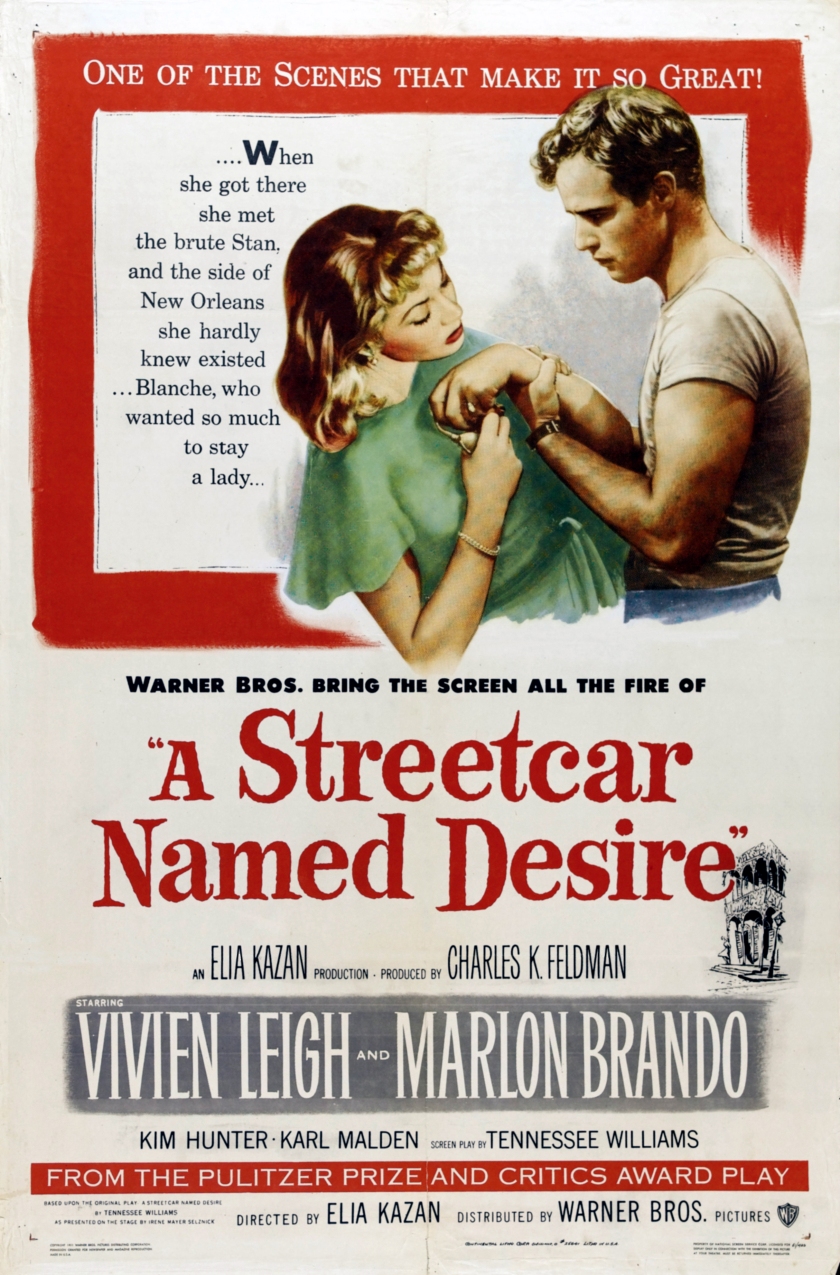 Sixty-nine years ago today, the film A Streetcar Named Desire premiered. I saw a 35mm version of this movie while sitting on the cold floor of the Fine Arts Building at Interlochen Center for the Arts. It stuck with me then and I still think of that first viewing every time I have seen it since. You have to see this movie.

Blanche DuBois, a middle-aged high school English teacher, arrives in New Orleans. She takes a streetcar named “Desire” to the French Quarter, where her sister, Stella, and her husband, Stanley Kowalski, live in a dilapidated tenement apartment. Blanche claims to be on leave from her teaching job due to her nerves and wants to stay with Stella and Stanley. Blanche’s demure, refined manner is a stark contrast to Stanley’s crude, brutish behavior, making them mutually wary and antagonistic. Stella welcomes having her sister as a guest, but Blanche often patronizes and criticizes her.

It is revealed that Blanche and Stella’s family estate, Belle Reve, was lost to creditors; Blanche, widowed at a young age after her husband’s suicide, is broke and had nowhere to go except to her sister. When Stanley suspects Blanche may be hiding inheritance money, she shows him paperwork proving the estate was foreclosed on. Stanley, looking for further proof, knocks some of Blanche’s private papers to the floor. Weeping, she gathers them, saying they are poems from her dead husband. Stanley explains he was only looking out for his family, then announces Stella is pregnant.

Blanche meets Stanley’s friend, Mitch, whose courteous manner is a contrast to Stanley’s other pals. Mitch is attracted to Blanche’s flirtatious charm, and a romance blossoms. During a poker night with his friends, Stanley explodes in a drunken rage, striking Stella and ending the game; Blanche and Stella flee upstairs to neighbor Eunice’s apartment. After his anger subsides, Stanley remorsefully bellows for Stella from the courtyard below. Irresistibly drawn by her physical passion for him, she goes to Stanley, who carries her off to bed. The next morning, Blanche urges Stella to leave Stanley, calling him a sub-human animal. Stella disagrees and wants to stay.

As weeks pass into months, tension mounts between Blanche and Stanley. Blanche is hopeful about Mitch, but anxiety and alcoholism have her teetering on mental collapse while anticipating a marriage proposal. Finally, Mitch says they should be together. Meanwhile, Stanley uncovers Blanche’s hidden history of mental instability, promiscuity, and being fired for sleeping with an underage student. Stanley then passes this news on to Mitch, in full knowledge this will end Blanche’s marriage prospects and leave her with no future. Stella angrily blames Stanley for the catastrophic revelation, but their fight is interrupted when Stella goes into labor.

Later, Mitch arrives and confronts Blanche about Stanley’s claims. She initially denies everything, then breaks down confessing. She pleads for forgiveness, but Mitch, hurt and humiliated, roughly ends the relationship. Later that night, while Stella’s labor continues, Stanley returns from the hospital to get some sleep. Blanche, dressed in a tattered old gown, pretends she is departing on a trip with an old admirer. She spins tale after tale about her fictitious future plans, and he pitilessly destroys her illusions. They engage in a struggle, after which Blanche is shown in a regressed psychotic state, implying Stanley may have assaulted her.

Weeks later, during another poker game at the Kowalski apartment, Stella and Eunice are packing Blanche’s belongings. Blanche, who believes she is going on a vacation, has suffered a complete mental breakdown and is being committed to a mental hospital. Blanche told Stella what happened with Stanley, but Stella disbelieves her. When a doctor and nurse arrive to remove Blanche, she resists and collapses, seized with total confusion. The doctor gently offers Blanche his arm, and she goes willingly. Mitch, present at the poker game, is visibly upset. As the car drives away with Blanche, Stella takes the baby upstairs to Eunice’s, ignoring Stanley’s calls and vowing not to return.