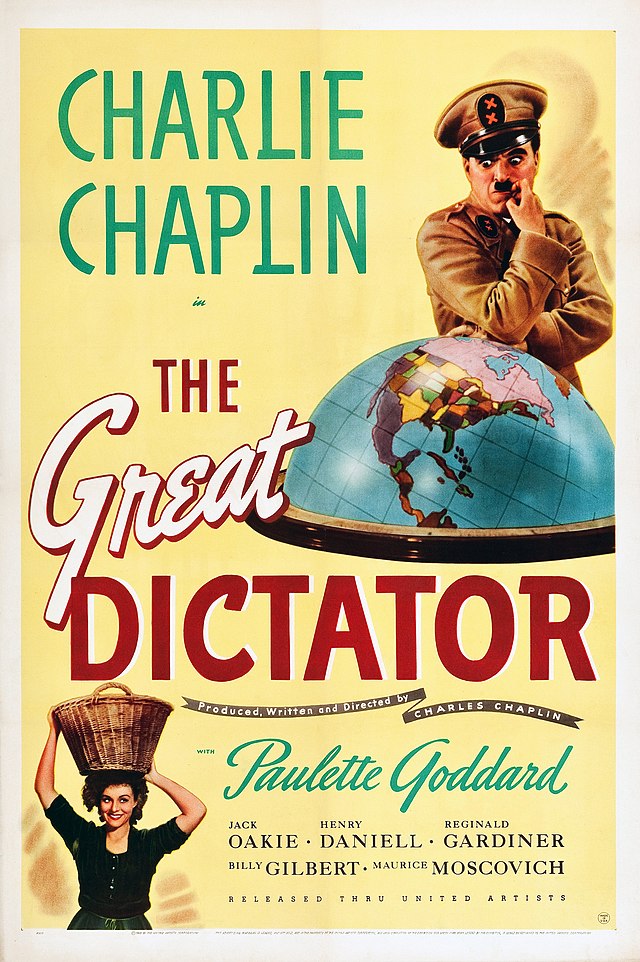 Eighty years ago today, the film The Great Dictator premiered in New York City. Charlie Chaplin touched every part of this movie and it is all the better because of it. The monologue he gives is one of the best I have ever watched. You must see this film.

On the Western Front in 1918, a Jewish Private (Charlie Chaplin) fighting for the Central Powers nation of Tomainia[8] valiantly saves the life of a wounded pilot, Commander Schultz (Reginald Gardiner), who carries valuable documents that could secure a Tomainian victory. However, their plane crashes mid-flight, and the Private subsequently suffers memory loss. Upon being rescued, Schultz is informed that Tomainia has officially surrendered to the Allied Forces, while the Private is carried off to a hospital.

Twenty years later, still suffering from amnesia, the Private leaves the hospital to return to his previous profession as a barber in the ghetto. The ghetto is now governed by Schultz, who has been promoted in the Tomainian regime under the ruthless dictator Adenoid Hynkel (also Chaplin).

The Barber falls in love with a neighbor, Hannah (Paulette Goddard), and together they try to resist persecution by military forces. The troops capture the Barber and are about to hang him, but Schultz recognizes him and restrains them. By recognizing him, and reminding him of World War I, Schultz helps the Barber regain his memory.

Meanwhile, Hynkel tries to finance his ever-growing military forces by borrowing money from a Jewish banker called Hermann Epstein, leading to a temporary ease on the restrictions on the ghetto. However, ultimately the banker refuses to lend him the money. Furious, Hynkel orders a purge of the Jews. Schultz protests against this inhumane policy and is sent to a concentration camp. He escapes and hides in the ghetto with the Barber. Schultz tries to persuade the Jewish family to assassinate Hynkel in a suicide attack, but they are dissuaded by Hannah. Troops search the ghetto, arrest Schultz and the Barber, and send both to a concentration camp. Hannah and her family flee to freedom at a vineyard in the neighboring country of Osterlich.

Hynkel has a dispute with the dictator of the nation of Bacteria, a man named Benzino Napaloni (Jack Oakie), over which country should invade Osterlich. The two dictators argue over a treaty to govern the invasion, while dining together at an elaborate buffet, which happens to provide a jar of “English Mustard”. The quarrel becomes heated and descends into a food fight, which is only resolved when both men eat the hot mustard and are shocked into cooperating. After signing the treaty with Napaloni, Hynkel orders the invasion of Osterlich. Hannah and her family are trapped by the invading force and beaten by a squad of arriving soldiers. The squad leader strikes Hannah to the ground, stands over her, and cruelly eats her basket of grapes.

Escaping from the camp in stolen uniforms, Schultz and the Barber, dressed as Hynkel, arrive at the Osterlich frontier, where a huge victory-parade is waiting to be addressed by Hynkel. The real Hynkel is mistaken for the Barber while out duck hunting in civilian clothes and is knocked out and taken to the camp. Schultz tells the Barber to go to the platform and impersonate Hynkel, as the only way to save their lives once they reach Osterlich’s capital. The Barber has never given a public speech in his life, but he has no other choice.

The terrified Barber mounts the steps but is inspired to seize the initiative. Announcing that he (as Hynkel) has had a change of heart, he makes an impassioned plea for brotherhood and goodwill.

“I’m sorry, but I don’t want to be an emperor. That’s not my business. I don’t want to rule or conquer anyone. I should like to help everyone if possible. Jew, Gentile, Black Man, White, we all want to help one another, human beings are like that. We want to live by each other’s happiness, not by each other’s misery. We don’t want to hate and despise one another. And this world has room for everyone, and the good Earth is rich and can provide for everyone. The way of life can be free and beautiful, but we have lost the way. Greed has poisoned men’s souls, has barricaded the world with hate, has goose-stepped us into misery and bloodshed. We have developed speed, but we have shut ourselves in. Machinery that gives abundance has left us in want. Our knowledge has made us cynical, our cleverness hard and unkind. We think too much and feel too little. More than machinery, we need humanity. More than cleverness, we need kindness and gentleness. Without these qualities life will be violent, and all will be lost. The aeroplane and the radio have brought us closer together. The very nature of these inventions cries out for the goodness in men, cries out for universal brotherhood, for the unity of us all. Even now, my voice is reaching millions throughout the world, millions of despairing men, women, and little children, victims of a system that makes men torture and imprison innocent people. To those who can hear me, I say do not despair. The misery that is now upon us is but the passing of greed, the bitterness of men who fear the way of human progress. The hate of men will pass, and dictators die, and the power they took from the people will return to the people. And so long as men die, liberty will never perish. …

Soldiers! Don’t give yourselves to brutes, men who despise you, enslave you, who regiment your lives, tell you what to do, what to think, and what to feel! Who drill you, diet you, treat you like cattle, use you as cannon fodder. Don’t give yourselves to these unnatural men, machine men with machine minds and machine hearts! You are not machines! You are not cattle! You are men! You have the love of humanity in your hearts! You don’t hate! Only the unloved hate, the unloved and the unnatural!

Soldiers! Don’t fight for slavery! Fight for liberty! In the 17th Chapter of St Luke it is written: “the Kingdom of God is within man” not one man nor a group of men, but in all men! In you! You, the people have the power, the power to create machines. The power to create happiness! You, the people, have the power to make this life free and beautiful, to make this life a wonderful adventure. Then in the name of democracy, let us use that power, let us all unite! Let us fight for a new world, a decent world that will give men a chance to work, that will give youth a future, and old age a security. By the promise of these things, brutes have risen to power. But they lie! They do not fulfill that promise! They never will! Dictators free themselves, but they enslave the people! Now let us fight to fulfill that promise! Let us fight to free the world, to do away with national barriers, to do away with greed, with hate and intolerance. Let us fight for a world of reason, a world where science and progress will lead to all men’s happiness.

Soldiers! In the name of democracy, let us all unite!”

Finally, he addresses a message of hope to Hannah, in case she can hear him.

“Look up, Hannah. The soul of man has been given wings, and at last he is beginning to fly. He is flying into the rainbow, into the light of hope, into the future, the glorious future that belongs to you, to me, and to all of us.”

Hannah hears the Barber’s voice on the radio. She turns her face, radiant with joy and hope, toward the sunlight, and says to her fellows: “Listen.”