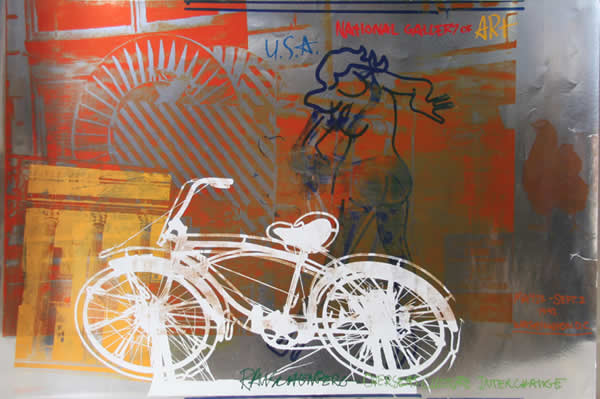 Today is the 95th birthday of artist Robert Rauschenberg.  Seeing things differently, interpreting them from other views and giving people the ability to do the same is as much an art to me as painting a bowl of apples.  The world is a better place because he was in it and still feels the loss that he has left.

BEST KNOWN FOR: American artist Robert Rauschenberg is best known for paving the way for pop art of the 1960’s with fellow artist Jasper Johns.

Traveling widely, he was based in New York City from 1950, where he and Jasper Johns paved the way for pop art of the 1960s. He worked with the Merce Cunningham Dance Company, New York, as costume and stage designer (1955–64).

An imaginative and eclectic artist, he used a mix of sculpture and paint in works he called ‘combines’, as seen in The Bed (1955). From the late 1950s he incorporated sound and motors in his work, such as Broadcast (1959), and silk-screen transfers, as in Flush (1964).

Throughout the 1980s and 1990s, he experimented with collage and new ways to transfer photographs. In 1997 the Solomon R Guggenheim Museum, New York City, staged a major exhibition of his works, showcasing the breadth and beauty of his work and its influence over the second half of the century.