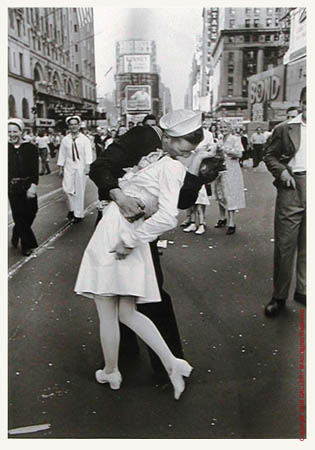 Today is the 122nd birthday of photographer Alfred Eisenstaedt.  You may not recognize his name, but you no doubt recognize the iconic work he did at Life Magazine, some of his images have made it into the collected American consciousness.  Some of his photographs are widely considered the most recognizable images of the 20th century.  For those reasons, you should know his name.  The world was a better place because he was in it and still feels the loss that he has left.

BEST KNOWN FOR:  Alfred Eisenstaedt was German-born, U.S. photojournalist. He was one of the first four photographers hired by Life Magazine.

Alfred Eisenstaedt was a pioneering German-American photojournalist whose images, many of them for Life magazine, established him as one of the first and most important photojournalists.

Eisenstaedt served in the German army in World War I from 1916 to 1918, sustaining injuries in both legs. He became an enthusiastic amateur photographer, turning professional in 1929 and joining the lively photojournalism scene in Germany. During the 1920s and early ’30s he was especially influenced by Erich Salomon, a pioneer in documentary photography.

Eisenstaedt was particularly skilled in the use of the 35-mm Leica camera. His work, often created in this format, had appeared in many European picture magazines by the early 1930s. He covered the rise of Adolf Hitler and in 1935 created a notable series of photographs of Ethiopia, just before the Italian invasion. That same year he immigrated to the United States, and in April 1936 he became one of the first four photographers hired by the new picture magazine Life. One of his images was published on the cover of the second issue, and he went on to become the leading Life photographer, eventually having some 2,500 photo-essays and 90 cover photos featured in the magazine.

Eisenstaedt photographed kings, dictators, and motion picture stars, but he also sensitively portrayed ordinary people in workaday situations. His aim, he once said, was “to find and catch the storytelling moment.”