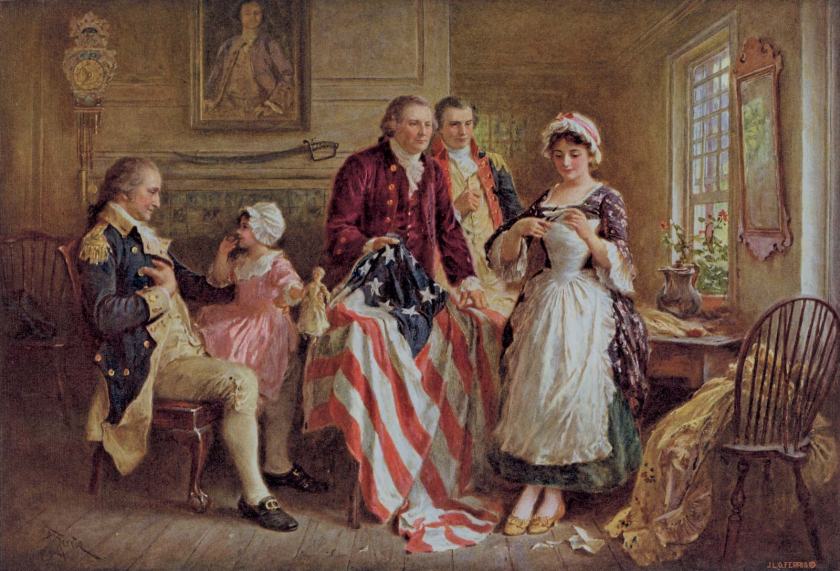 Today is the 268th birthday of Best Ross. She is widely believed to be the designer of the first American Flag and had a very interesting life. The world is a better place because she was in it and still feels the loss that she has left.

BEST KNOWN FOR: According to legend, Betsy Ross made the first American flag. Despite a lack of credible evidence to support this, she remains an icon of American history.

Betsy Ross, best known for making the first American flag, was born Elizabeth Griscom in Philadelphia, Pennsylvania, on January 1, 1752. A fourth-generation American, and the great-granddaughter of a carpenter who had arrived in New Jersey in 1680 from England, Betsy was the eighth of 17 children. Like her sisters, she attended Quaker schools and learned sewing and other crafts common in her day.

After Betsy completed her schooling, her father apprenticed her to a local upholsterer, where, at age 17, she met John Ross, an Anglican. The two young apprentices quickly fell for one another, but Betsy was a Quaker, and the act of marrying outside of one’s religion was strictly off-limits. To the shock of their families, Betsy and John married in 1772, and she was promptly expelled from both her family and the Friends meeting house in Philadelphia that served as a place of worship for Quakers. Eventually, the couple opened their own upholstery business, drawing on Betsy’s deft needlework skills.

In 1776, at the start of the American Revolution, John was killed by a gunpowder explosion while on militia duty at the Philadelphia waterfront. Following his death, Betsy acquired his property and kept up the upholstery business, working day and night to make flags for Pennsylvania. A year later, Betsy married Joseph Ashburn, a sailor. Joseph, however, also met an unfortunate end. In 1781, the ship he was on was captured by the British and he died in prison the next year.

In 1783, Betsy married for a third and final time. The man, John Claypoole, had been in prison with her late husband Joseph Ashburn, and had met Betsy when he delivered Joseph’s farewells to her. John died 34 years later, in 1817, after a long disability.

Betsy died on January 30, 1836, at the age of 84, in Philadelphia. The story of her making the first American flag was shared with the public by her grandson nearly 50 years after her passing. The story goes that she made the flag in June of 1776 after a visit from President George Washington, Robert Morris and her husband’s uncle, George Ross. Her grandson’s recollections were published in Harper’s Monthly in 1873, but today most scholars agree that it was not Betsy who made the first flag. However, Betsy was without dispute a flagmaker who, records show, was paid in 1777 by the Pennsylvania State Navy Board for making “ship’s colours, &c.”

Although the Betsy Ross House, where she is reputed to have made the flag, is one of the most visited tourist sites in Philadelphia, the claim that she once lived there is also matter of dispute. Despite the unlikelihood of the story for which she is known, Betsy Ross is, however, a fine example of what many women of her time audaciously endured: widowhood, single motherhood, managing household and property independently and quickly remarrying for economic reasons, and her story and her life are nonetheless stitched into the fabric of American history.