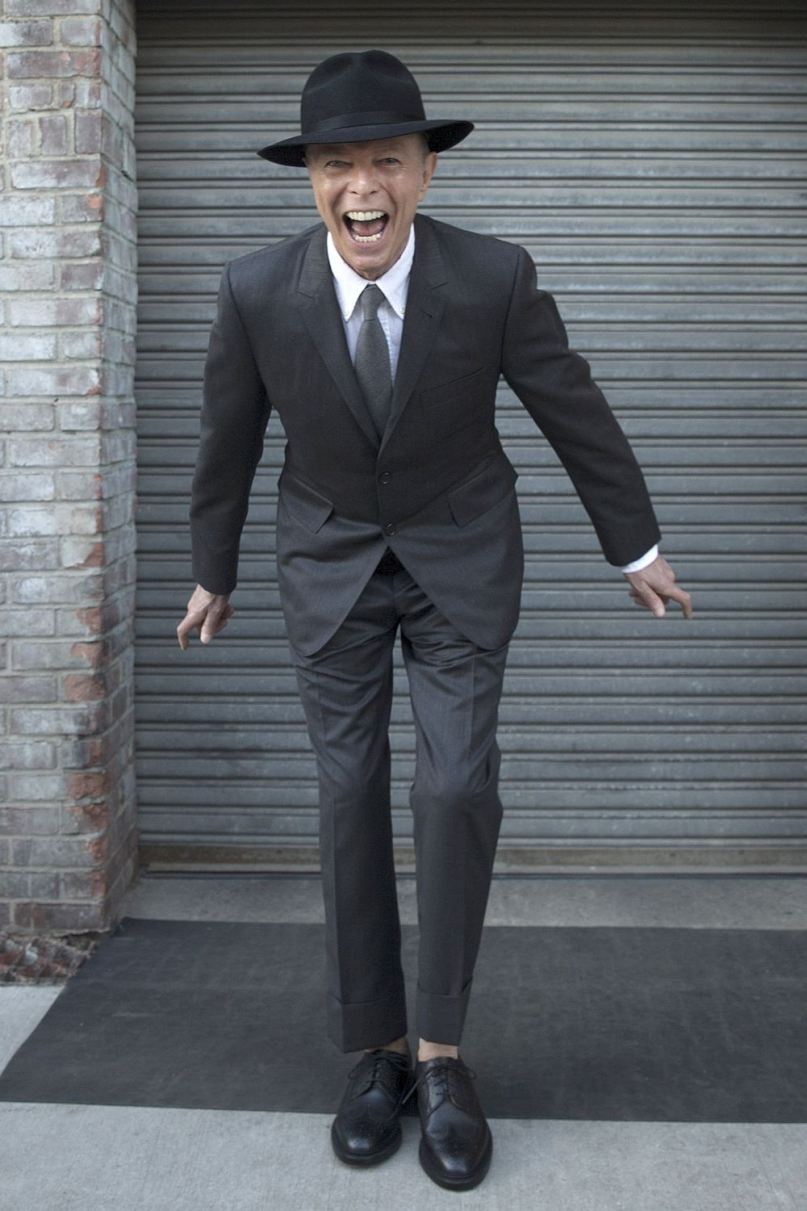 Today is the 74th birthday of the artist David Bowie. There are so many David Bowie moments that feel personally to me that they are too numerous to name. I was listening to Ashes To Ashes when I learned that a close friend had died that morning, they used to play China Doll on the boom box wen I practiced floor exercise runs for hours and hours in junior high, and his cover of Under Pressure with Annie Lennox at the Freddie Mercury Tribute concert is one of my very favorite performances of all time. The world is a better place because he was in it and still feels the los that he has left.

BEST KNOWN FOR: David Bowie was an English rock star known for dramatic musical transformations, including his character Ziggy Stardust. He was inducted into the Rock and Roll Hall of Fame in 1996.

Known as a musical chameleon for his ever-changing appearance and sound, David Bowie was born David Robert Jones in Brixton, South London, England, on January 8, 1947.

David showed an interest in music from an early age and began playing the saxophone at age 13. He was greatly influenced by his half-brother Terry, who was nine years older and exposed young David to the worlds of rock music and beat literature.

But Terry had his demons, and his mental illness, which forced the family to commit him to an institution, haunted David for a good deal of his life. Terry committed suicide in 1985, a tragedy that became the focal point of Bowie’s later song, “Jump They Say.”

After graduating from Bromley Technical High School at 16, David started working as a commercial artist. He also continued to play music, hooking up with a number of bands and leading a group himself called Davy Jones and the Lower Third. Several singles came out of this period, but nothing that gave the young performer the kind of commercial traction he needed.

Out of fear of being confused with Davy Jones of The Monkees, David changed his last name to Bowie, a name that was inspired by the knife developed by the 19th century American pioneer Jim Bowie.

Eventually, Bowie went out on his own. But after recording an unsuccessful solo album, Bowie exited the music world for a temporary period. Like so much of his later life, these few years proved to be incredibly experimental for the young artist. For several weeks in 1967 he lived at a Buddhist monastery in Scotland. Bowie later started his own mime troupe called Feathers.

Around this time he also met the American-born Angela Barnett. The two married on March 20, 1970, and had one son together, whom they nicknamed “Zowie,” in 1971, before divorcing in 1980. He is now known by his birth name Duncan Jones.

By early 1969, Bowie had returned full time to music. He signed a deal with Mercury Records and that summer released the single “Space Oddity.” Bowie later said the song came to him after seeing Stanley Kubrick’s 2001: A Space Odyssey. “I went stoned out of my mind to see the movie and it really freaked me out, especially the trip passage.”

The song quickly resonated with the public, sparked in large part by the BBC’s use of the single during its coverage of the Apollo 11 moon landing. The song enjoyed later success in the United States, when it was released in 1972 and climbed to number 15 on the charts.

Bowie’s next album, The Man Who Sold the World (1970), further catapulted him to stardom. The record offered up a heavier rock sound than anything Bowie had done before and included the song “All the Madmen,” about his institutionalized brother, Terry. His next work, 1971’s Hunky Dory, featured two hits: the title track that was a tribute to Andy Warhol, the Velvet Underground and Bob Dylan; and “Changes,” which came to embody Bowie himself.

As Bowie’s celebrity profile increased, so did his desire to keep fans and critics guessing. He claimed he was gay and then introduced the pop world to Ziggy Stardust, Bowie’s imagining of a doomed rock star, and his backing group, The Spiders from Mars.

His 1972 album, The Rise and Fall of Ziggy Stardust and the Spiders from Mars, made him a superstar. Dressed in wild costumes that spoke of some kind of wild future, Bowie, portraying Stardust himself, signaled a new age in rock music, one that seemed to officially announce the end of the 1960s and the Woodstock era.

But just as quickly as Bowie transformed himself into Stardust, he changed again. He leveraged his celebrity and produced albums for Lou Reed and Iggy Pop. In 1973, he disbanded the Spiders and shelved his Stardust persona. Bowie continued on in a similar glam rock style with the album Aladdin Sane (1973), which featured “The Jean Genie” and “Let’s Spend the Night Together,” his collaboration with Mick Jagger and Keith Richards.

Around this time he showed his affection for his early days in the English mod scene and released Pin Ups, an album filled with cover songs originally recorded by a host of popular bands, including Pretty Things and Pink Floyd.

By the mid 1970s Bowie had undergone a full-scale makeover. Gone were the outrageous costumes and garish sets. In two short years he released the albums David Live (1974) and Young Americans (1975). The latter album featured backing vocals by a young Luther Vandross and included the song “Fame,” co-written with John Lennon and Carlos Alomar, which became Bowie’s first American number one single.

In 1980 Bowie, now living in New York, released Scary Monsters, a much-lauded album that featured the single “Ashes to Ashes,” a sort of updated version of his earlier “Space Oddity.”

Three years later Bowie recorded Let’s Dance (1983), an album that contained a bevy of hits such as the title track, “Modern Love” and “China Girl,” and featured the guitar work of Stevie Ray Vaughan.

Of course, Bowie’s interests didn’t just reside with music. His love of film helped land him the title role in The Man Who Fell to Earth (1976). In 1980, Bowie starred on Broadway in The Elephant Man, and was critically acclaimed for his performance. In 1986, he starred as Jareth, the Goblin King, in the fantasy-adventure film Labyrinth, directed by Jim Henson and produced by George Lucas. Bowie performed opposite teenage Jennifer Connolly and a cast of puppets in the movie, which became a 1980s cult classic.

Over the next decade, Bowie bounced back and forth between acting and music, with the latter especially suffering. Outside of a couple of modest hits, Bowie’s musical career languished. His side project with musicians Reeve Gabrels and Tony and Hunt Sales known as Tin Machine released two albums Tin Machine (1989) and Tin Machine II (1991), which both proved to be flops. His much-hyped album Black Tie White Noise (1993), which Bowie described as a wedding gift to his new wife, supermodel Iman, also struggled to resonate with record buyers.

Oddly enough, the most popular Bowie creation of late has been Bowie Bonds, financial securities the artist himself backed with royalties from his pre-1990 work. Bowie issued the bonds in 1997 and earned $55 million from the sale. The rights to his back catalog were returned to him when the bonds matured in 2007.

In 2004 Bowie received a major health scare when he suffered a heart attack while onstage in Germany. He made a full recovery and went on to work with bands such as Arcade Fire and with the actress Scarlett Johansson on her album Anywhere I Lay My Head (2008), a collection of Tom Waits covers.

Bowie, who was inducted into the Rock and Roll Hall of Fame in 1996, was a 2006 recipient of the Grammy Lifetime Achievement Award. He kept a low profile for several years until the release of his 2013 album The Next Day, which skyrocketed to number 2 on the Billboard charts. The following year, Bowie released a greatest hits collection Nothing Has Changed, which featured a new song “Sue (Or in a Season of Crime).”

In 2015, he collaborated on Lazarus, an Off-Broadway rock musical starring Michael C. Hall, which revisited his character from The Man Who Fell to Earth.

He released Blackstar, his final album on January 8, 2016, his birthday. New York Times critic Jon Pareles noted that it was a “strange, daring and ultimately rewarding” work “with a mood darkened by bitter awareness of mortality.” Only a few days later, the world would learn that the record had been made under difficult circumstances.

The music icon died on January 10, 2016, two days after his 69th birthday. A post on his Facebook page read: “David Bowie died peacefully today surrounded by his family after a courageous 18 month battle with cancer.”

He was survived by his wife Iman, his son Duncan Jones and daughter Alexandria, and his step-daughter Zulekha Haywood. Bowie also left behind an impressive musical legacy, which included 26 albums. His producer and friend Tony Visconti wrote on Facebook that his last record, Blackstar, was “his parting gift.”

Friends and fans were heartbroken at his passing. Iggy Pop wrote on Twitter that “David’s friendship was the light of my life. I never met such a brilliant person.” The Rolling Stones remembered him on Twitter as “a wonderful and kind man” and “a true original.” And even those who didn’t know personally felt the impact of his work. Kanye West tweeted, “David Bowie was one of my most important inspirations.” Madonna posted “This great Artist changed my life!”