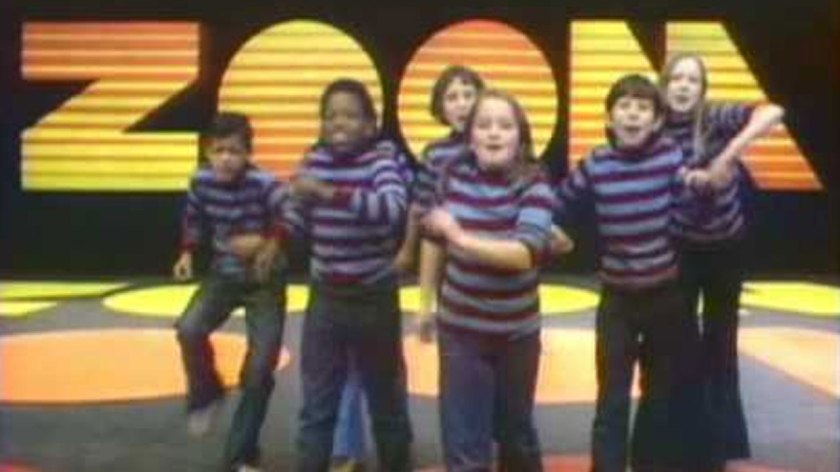 Forty-nine years ago today, the public television show Zoom premiered. I was a big fan. So much so that when picking out my clothes for kindergarten, I chose several different colored striped shirts from the Sears catalog. I wish I was able to find better video clips of it, there just doesn’t seem to be much available.

Zoom is a half-hour educational television program, created almost entirely by children, which aired on PBS originally from January 9, 1972, to February 10, 1978. It was originated and produced by WGBH-TV in Boston. Inspired by educational shows like Sesame Street and Electric Company, but designed to give the kids who watched it a voice without adults on screen, it was, for the most part, unscripted. Far from seeking to make stars of the child performers, their contracts prohibited them from making any television appearances or doing commercials for three years after they left the show.

Zoom encouraged children to “turn off the TV and do it!” On the show, a cast of seven kids known as Zoomers presented various activities such as games, plays, poems, recipes, jokes, songs, movies, science experiments, and informal chats on subjects such as hospitals, prejudice, etc., all suggested by viewer contributions. These activities were introduced by such titles as Zoomovie, Zoom Play of the Week, Zoomrap (later Zoomchat), Zoomgame, Zoomdo, Zoomgoody, Zoomphenomenon, etc.

The mail-in request became a pop culture reference for its musical exhortation to “Write Zoom, Z-double-O-M, Box 3-5-0, Boston, Mass 0-2-1-3-4: send it to Zoom!”. The lines were mostly spoken, but the ZIP code was sung.

The program featured its own language, Ubbi-Dubbi, where the syllable “ub” was added before each vowel sound in each syllable of each word (“H-ub-i, fr-ub-iends,” etc.).

Each show had one or two Zoomguest sequences, short film documentaries about children with special talents (singing, tap-dancing, instrument-making, etc.) or interesting hobbies or jobs. The premiere episode featured a boy who built a boat by making a ring of sticks and twigs and covering them with a tarpaulin.

The performers in the original series were known for wearing striped rugby shirts and jeans. In Seasons 1 and 2 the cast performed barefoot but wore shoes from Season 3 on.

Several episodes were available with captions for the hearing-impaired.