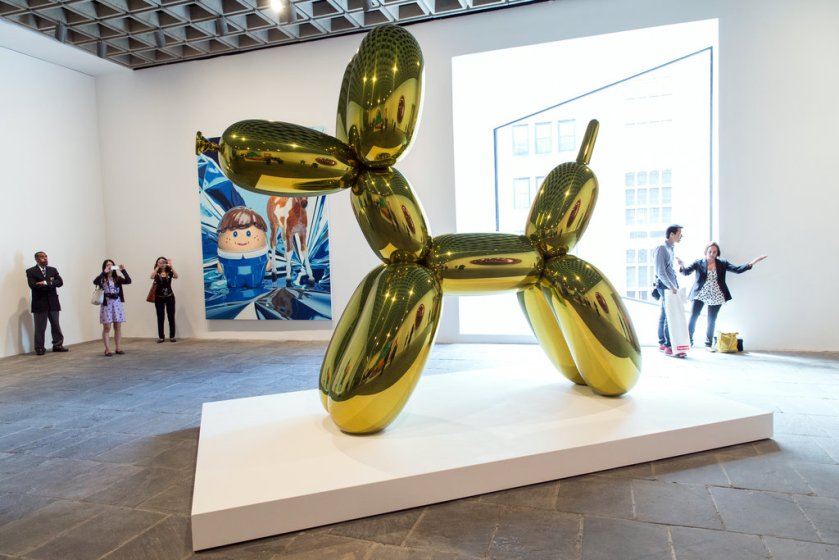 Today is the 66th birthday of the artist Jeff Koons.  He is one of the most important modern artist living today.  The world is a better place because he is in it.

BEST KNOWN FOR: Jeff Koons is a famous contemporary artist whose work is influenced by an eclectic array of sensibilities.

Jeff Koons was born on January 1, 1955, in York, Pennsylvania. After high school, he headed south to Maryland, where he attended the Maryland Institute College of Art in Baltimore. While earning his M.F.A. there (1976), he attended a show at the Whitney Museum in New York, an exhibition that would change his life.

“I remember being an art student and going to the Whitney in 1974 to see the exhibition of Jim Nutt, the Chicago imagist,” Koons says. “It was then I transferred to school in Chicago, all because of that show.” So Koons enrolled at the School of the Art Institute of Chicago, an institution that would grant him an honorary doctorate more than 30 years later (2008).

Koons’ first show was staged in 1980, and he emerged onto the art scene with a style that blended several existing styles—pop, conceptual, craft, appropriation—to create his own unique mode of expression.

An “idea man,” Koons now runs his studio as he would a production office, often using computer-aided design and hiring out the actual construction of his pieces to technicians who can bring to life his ideas with more precision than he himself could.

His work takes on, in usually unconventional ways, such hot-button subjects such as sex, race, gender and fame, and it comes to life in such forms as balloons, bronzed sporting-goods items and inflatable pool toys. His knack for elevating the stature of such items from kitsch objects to high art has made his name synonymous with the art of mass culture.

And the transformation that takes place from Koons’ finding the objects he’ll use and the art he creates with them often gives birth to an unexpected psychological dimension, as shifting color, scale and representation take on new meaning, and the viewer can often find something wholly new in how humans, animals and anthropomorphized objects come to life.

Koons’ exhibits have always elicited inspired responses, a trait that perhaps itself is a marker in his importance as an artist, and since his first show in 1980 his works have been widely exhibited across the globe. In 2014, the Whitney, the museum that gave Koons a huge jolt of artistic inspiration as a student, held a retrospective of his body of work, the first to do so.

Of Koons, the Whitney says, “Throughout his career, he has pioneered new approaches to the readymade, tested the boundaries between advanced art and mass culture, challenged the limits of industrial fabrication, and transformed the relationship of artists to the cult of celebrity and the global market.”

He has also done solo shows at the château de Versailles in France (2008–09), the Museum of Contemporary Art in Chicago (2008), the Helsinki City Art Museum (2005), the Astrup Fearnley Museum of Modern Art in Oslo (2004) and the Museo Archeologico Nazionale di Napoli (2003).

Along with high-profile exhibits, Koons’ career has been notable for the wide array of prestigious awards he has received, which span the entire course of his career. Notable among them are the State Department’s Medal of Arts (awarded by Secretary of State Hillary Rodham Clinton in 2012) and becoming an honorary member of the Royal Academy, London (2010), and an officer of the French Legion of Honor (2007).

Koons was elected as a Fellow to the American Academy for Arts and Sciences in 2005.