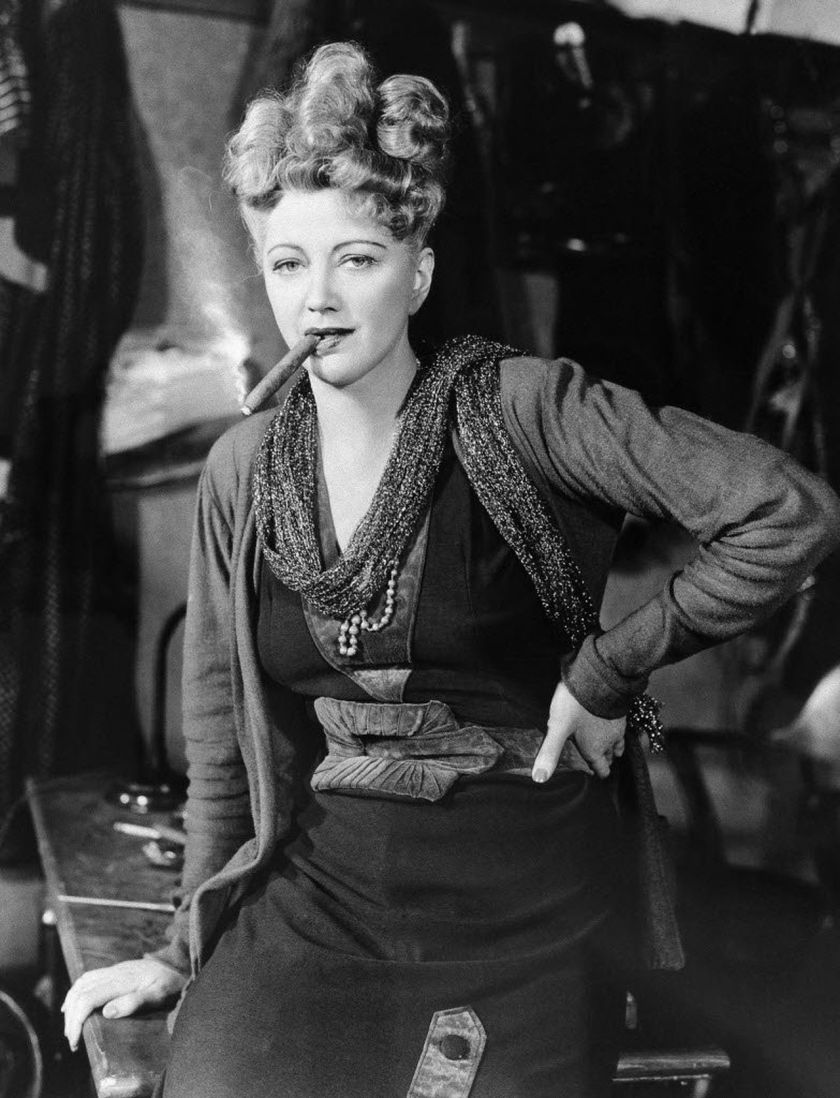 Today is the 120th birthday of the actress and acting teacher Stella Adler. The world is a better place because she was in it and still feels the loss that she has left.

Stella Adler was born on February 10, 1901, in New York, the youngest daughter of the Yiddish theater actors, Jacob P. Adler and Sarah Adler, who founded an acting dynasty. In addition to her parents, Stella’s family included her siblings Charles Adler, Jay Adler, Julia and Luther Adler, all of whom appeared on Broadway. Stella made her debut at the age of four in the family-owned theater in the play “Broken Hearts”. At the age of 18, she made her London debut as “Naomi” in “Elisa Ben Avia”, in which she appeared for a year before returning to New York. Stella then spent the next 10 years treading the boards in vaudeville and Yiddish language theaters throughout North and South America and Europe. In all, she appeared in 100 plays.

Adler was widely acclaimed in the Yiddish theater, but she wanted to break out of that theatrical ghetto and play a wider variety of roles on the legitimate stage and in Hollywood. What was constant in Adler’s 83-year-long career was her intense dedication to broadening the level of artistry in the theater.

She made her Broadway debut as a replacement in Carl Kapek’s “The World We Live In”. (Her official debut as a member of the original company was in “The Straw Hat” on Oct 14, 1926). After its run played out, she joined the acting school run by Richard Boleslawski and Maria Ouspenskaya, the American Laboratory. Both Boleslavsky and Maria Ouspenskaya were former members of the famous Moscow Art Theatre.

While married to Horace Eleaschreff, Adler met Harold Clurman, who would become her second husband and one of the co-founders of The Group Theatre, in 1924 (They would marry 19 years later). In this period, she met another future Group Theatre co-founder, Lee Strasberg, at the Actor’s Laboratory when she participated in classes there in 1928. Along with Cheryl Crawford, Clurman and Strasberg founded the Group Theatre in 1931. It became arguably the most influential theater group in 20th century America, at least in terms of its influence on acting by introducing the teaching of Konstantin Stanislavski’s System to the American stage. Its aim was the championing of realism and it is credited with bringing naturalism into the American theater. Clurman and Strasberg invited Adler to become a founding member of the Group Theatre. The Utopian political ideals that were central to the idea of the Group Theatre did not appeal to Adler, nor did the cooperative focus of the company, but she did join after being promised leading roles and because she supported Clurman’s vision of the theater as an art form. It was with the Group Theatre that Stella played some of her more acclaimed roles, including “Sarah Glassman” in “Success Story”, “Bessie Berger” in “Awake and Sing” and “Clara” in “Paradise Lost”.

In 1934, she took a leave of absence from the Group Theatre and traveled to Russia to study for five weeks in Moscow Art Theatre, and in private sessions with the great man himself, Konstantin Stanislavski, whose motto was “Think of your own experiences and use them truthfully.” Adler was among few American actors, such as Michael Chekhov and Richard Boleslawski to study privately with Stanislavsky. In August 1934, she returned from Russia, and made a presentation of what she learned from Stanislavski, then she began teaching acting classes to members of The Group Theatre troupe, including the actors Elia Kazan, Sanford Meisner and Robert Lewis. Meisner and Lewis would go on to be the most influential acting teachers in America after Adler herself and Strasberg. Kazan, who would go on to become the greatest theatrical director in 20th century American theater, also had a huge impact on American acting by championing what became known in the vernacular as “The Method”, which was closely related to Adler’s teaching. Kazan’s exposure to Konstantin Stanislavski’s System via Adler was highly influential in his work.

Stella Adler, being the most experienced of the Group Theatre actors, had not accepted Lee Strasberg’s idiosyncratic version of Stanislavski’s System, which Strasberg interpreted as “method” and shifted its goals to memory exercises. “The (memory) emphasis was the sick one” in Strasberg’s “method”, said Stella Adler, as it made acting under Strasberg increasingly painful for her. Feeling uncomfortable with the Group Theatre members, many of whom were also Communist Party members, Adler left the company in 1937 to conquer Hollywood. According to her later student and friend, Marlon Brando, she had a bad nose job to camouflage her looks, so hell-bent was she on conquering the movies as she had the stage. She was not to succeed.Adler spent six years as an associate producer at the Metro-Goldwyn-Mayer studio, at which she acted in movies under the name “Stella Ardler.”

She did not achieve the quality of roles or the acclaim that she had in the theater, and she eventually returned to the stage in the early 1940s, acting and directing on Broadway and in London. Adler also began to teach at German émigré Erwin Piscator’s acting workshop at the New School for Social Research, where she mentored the young Marlon Brando. She married Clurman in 1943. At its core, the theatrical experience is rooted in the willing suspension of disbelief, with an audience willingly ignoring the fact that it is watching a synthetic entertainment in a highly unrealistic venue. Such is the power of good theater to draw the audience into the world created upon the stage that this suspension of disbelief not only occurs, but that it, as an art form, provides an immediacy that other more “realistic” forms such as movies or television cannot provide. Adler believed that “the theater exists 99% in the imagination” and it was this belief that was the foundation of her philosophy and instruction.

Drawing on Stanislavski’s System, Adler made it the bedrock of her technique that an actor’s primary concern was with the emotional origins of the script. An actor (and acting student) must search between the lines of the script for the playwright’s important, but unspoken, messages. To tap into this vein and bring forth the real meaning in a character, an actor needed both imagination and the ability to open oneself up emotionally. Essentially, Adler’s method emphasized that authenticity in acting is achieved by drawing on inner reality to expose deep emotional experience. Konstantin Stanislavski taught her that “the source of acting is imagination and the key to its problems is truth, truth in the circumstances of the play.”

It was a fortuitous occasion when Brando enrolled in Erwin Piscator’s Dramatic Workshop at New York’s New School and came into Stella Adler’s orbit. The results of this meeting between an actor and the teacher preparing him for a life in the theater would mark a watershed in American acting and culture as it was through Brando that “The Method” was introduced into the American theater and movies. It would dominate American acting for more than half-a-century and is still the dominant paradigm now, over sixty years since Adler tutored Brando.

“The Method” as taught by Adler and other Group Theater alumni was a more naturalistic style of performing, as it engendered a close identification of the actor with the character’s emotions. The extraordinarily sensitive and intelligent Brando was the ideal student due to the prodigious talent he could yoke to the harness of technique that was “The Method”. Adler took pride of place among Brando’s acting teachers, and socially she helped turn him from a fairly ignorant Midwestern farm boy into a knowledgeable and cosmopolitan artist who one day would socialize with presidents.

Aside from acting, Adler directed two plays on Broadway, “Manhattan Nocturne” during the 1943-44 season, and “Sunday Breakfast” in 1952. Her last appearance as an actress on the Broadway stage was in the revival of “He Who Gets Slapped” in 1946.

Stella Adler left the faculty of the New School in 1949 to establish her own acting school, the Stella Adler Theatre Studio (which would be renamed the Stella Adler Conservatory of Acting before taking its final name, the Stella Adler Studio of Acting). She developed a curriculum from her wide knowledge and experience, combining her understanding of Konstantin Stanislavski’s System with the techniques and traditions of the Yiddish theater, The Group Theatre, Broadway and Hollywood. In addition to acting technique, the school offered workshops in play analysis, character, and scene preparation; the students gleaned on-stage experience by performing scenes and plays before invited audiences. Among the alumni of her school were Marlon Brando (chairman of the board of the school until his death), Warren Beatty (who has taken over the position), Robert De Niro and Harvey Keitel.

Adler taught script analysis at Yale for a year and half. Courses for advanced students and professionals were added to the curriculum of her own school, including rehearsal technique and script analysis. Due to her reputation and connections, the school was able to attract distinguished lecturers, including Sir John Gielgud and Arthur Laurents.

Stella Adler was a major inspiration to her students. Her mantra was, “You act with your soul. That’s why you all want to be actors – because your souls are not used up by life”. Adler is still, more than a decade after her death, viewed as one of the foremost influences on contemporary acting.

Adler divorced Clurman in 1960, after 17 years of marriage. Subsequently, she married Mitchell Wilson, whom she remained married to until his death in 1973. She did not remarry.