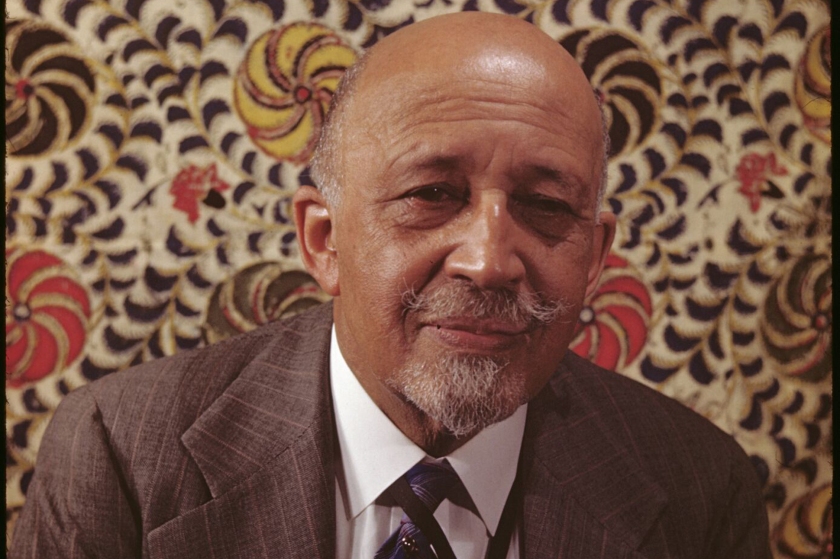 Today is the 153rd birthday of the sociologist W. E. B. Du Bois. The world is a better place because he was in it and still feels the loss that he has left.

The Crisis Founder and Editor (1910-34)
Proceedings of the Annual Conferences on the Negro Problem Founder and Publisher (1897-1910)
NAACP Co-Founder and Director of Publications and Research (1909-34)
National Council of Arts, Sciences, and Professions (1948)

BEST KNOWN FOR: W.E.B. Du Bois was an influential African American rights activist during the early 20th century. He co-founded the NAACP and wrote ‘The Souls of Black Folk.’

American sociologist and civil rights activist W. E. B. Du Bois began working while still very young, to help support his family after his father left home. He was of mixed black and white ancestry though clearly black in appearance, but African-Americans formed a very small percentage of the population in his home town and he said that he felt accepted by his white classmates. He was radicalized by the more overt racism he endured during his college years at Fisk College in Nashville, and first came to national attention when he criticized prominent black leader Booker T. Washington for an 1895 speech in Atlanta in which Washington urged blacks to accept their subservient place in American society and improve their lot through study and hard work.

Du Bois became one of the first black American scholars to study in Europe, and the first African-American to earn a PhD at Harvard. His thesis, The Suppression of the African Slave-Trade to the United States of America, 1638-1870, has been republished dozens of times and remains an authoritative work on the topic. He wrote some of the earliest scientific studies of black American communities, and spent many years studying black society in America while concurrently calling for an organized, activist response to racism. His 1903 book The Souls of Black Folk was widely read by blacks and worrisome to many whites, for its call for agitation, protest, and legal action to rid America of segregation, Jim Crow laws, and political disfranchisement.

In 1905 Du Bois was one of the founders and leaders of the Niagara Movement, an early civil rights group considered radical in its time. Six years later the Niagara Movement’s biracial membership was absorbed into the new National Association for the Advancement of Colored People (NAACP), of which Du Bois was also a founding member. He founded, wrote and edited the NAACP’s journal The Crisis for almost twenty-five years, with circulation peaking at well past 100,000. With such a wide and influential readership, Du Bois probably had more impact on black audiences than Washington, but in white-controlled media Washington was still portrayed as America’s preeminent black leader.

In several trips to the Soviet Union while the Communist Revolution was still recent, Du Bois grew sympathetic to the ideology of Marx and Engels, and thought he had found a philosophy where all persons were treated equally. Through the 1920s he had frequent and public disagreements with Marcus Garvey, another prominent African-American leader, disputing Garvey’s radical separatist perspective. By the mid-1930s he had reached exasperation at the internal politics of the NAACP, where liberal whites had leadership roles and blacks were generally relegated to support positions. He resigned from The Crisis in 1934, and established the scholarly review of race and culture, Phylon. His academic work continued with several detailed studies of African-American sociology, including The Encyclopedia of the Negro in 1946.

He remained an eloquent and impatient voice on the political front, decrying unequal rights and anti-Semitism. He was frequently and accurately portrayed in American media as a Communist, though by his own political affiliation he was more publicly a member of the American Labor Party. He called for union and labor rights, equal rights for women, and the dismantling and banning of atomic weapons. Of America’s increasingly militaristic approach to foreign affairs he said, “We [the US] are leading the world to hell in a new colonialism with the same old human slavery, which once ruined us, to a third world war, which will ruin the world.”

In 1959, 91-year-old Du Bois addressed a huge audience in Beijing with a speech that made headlines in America, saying, “In my own country for nearly a century I have been nothing but a nigger”. In the aftermath of the controversy that followed that trip and statement, he accepted an invitation from Ghanaian President Kwame Nkrumah to relocate there and edit Encyclopedia Africana, which was intended as the definitiveve reference work on that continent. He settled in the city of Accra, where he died just months after becoming a Ghanian citizen in 1963. The Encyclopedia was left unfinished for many years, but was completed by Kwame Anthony Appiah and Henry Louis Gates, Jr. in 1999.

Yolanda Du Bois, his daughter from his first marriage, married poet Countee Cullen. His second wife, Shirley Graham Du Bois (1896-1977), was a well-known playwright, author, and activist who, after W. E. B. Du Bois’s death, established Ghana Television, that nation’s first modern broadcasting facility. Her son and Du Bois’s stepson, David Graham Du Bois, was editor of the Black Panther Party’s newsletter in the 1970s, and is a sociologist at Amherst College. Shirley Du Bois’s other son, Robert McCants, was an American soldier who died in 1944, seven years before her marriage to Du Bois, and she always maintained that substandard medical care due to his race led directly to his death.