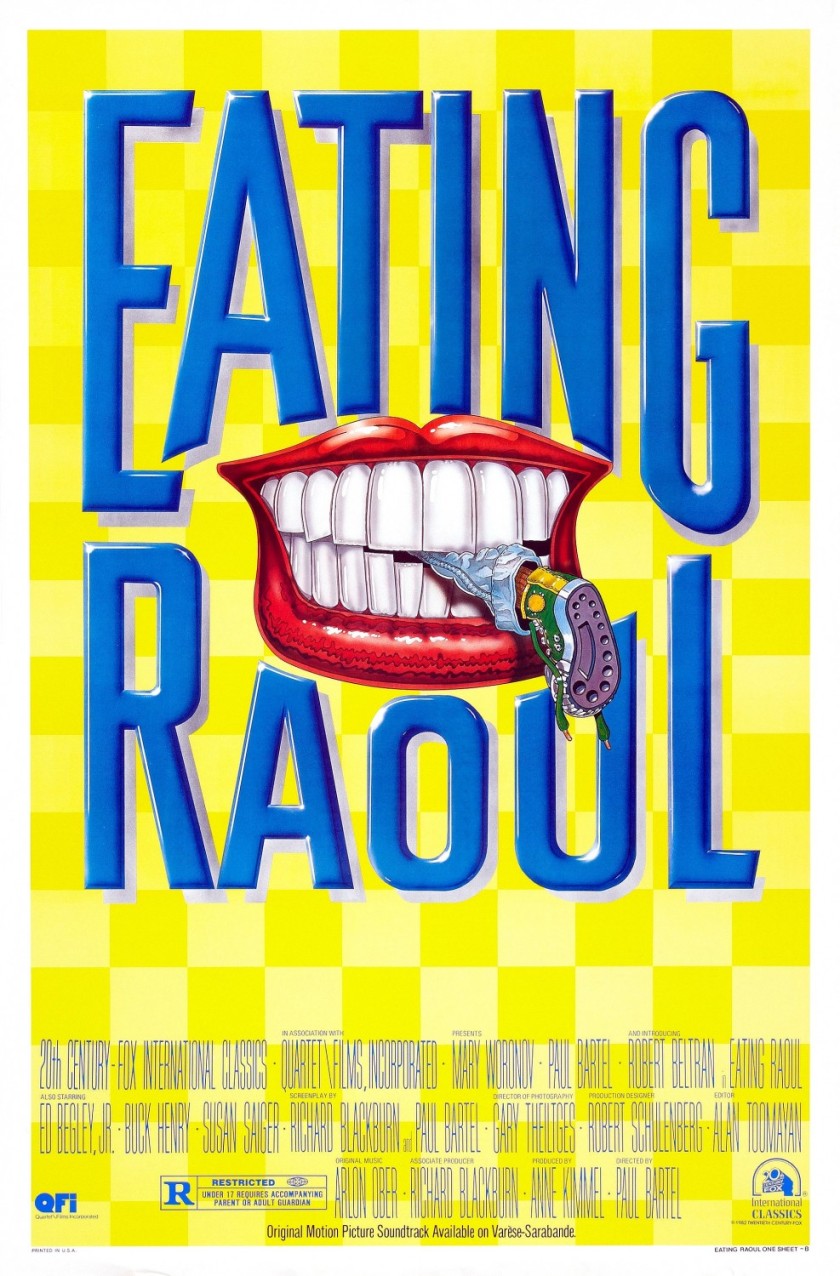 Thirty-nine years ago today, the film Eating Raoul premiered. You need to watch this movie.

Paul Bland is a balding wine snob who works at a cheap wine shop. His attractive wife Mary is a nurse who is routinely groped by hospital patients. When Paul is fired, they are left with barely enough money to survive and fear that they will never realize their dream of opening a restaurant. Paul and Mary sleep in separate twin beds since they are prudes who disapprove of sex. They live in an apartment building which regularly hosts swingers parties, which they despise.

When a drunk swinger wanders into their apartment and tries to rape Mary, Paul hits him on the head with a cast-iron frying pan, unintentionally killing him. Thinking that no one will miss him, they take his money and put his body in the trash compactor. After they kill another swinger the same way, they realize they can make money by killing “rich perverts”.

The Blands have new locks installed in their apartment to protect Paul’s wine collection. The locksmith is Raoul Mendoza, whose service is a ruse which allows him to rob his customers’ homes. He sneaks into the Blands’ apartment the next night and stumbles across the corpse of their latest victim. Paul confronts Raoul and both men realize they are in a compromising position. They strike a deal: neither will report the other to the police, Paul and Mary will pocket their victims’ cash, and Raoul will keep their other possessions — splitting any proceeds with them — and dispose of the bodies.

When a client of Mary’s fails to show one night, Paul leaves to buy groceries and a new frying pan, since Mary is squeamish about cooking in the one they use to kill people. While Mary is alone, the client arrives late and tries to rape her. Raoul drops by and strangles the client to death. He offers Mary a joint and they have sex. After Paul grows suspicious, he follows Raoul and discovers he has been selling the victims’ bodies to a dog food company, selling their expensive cars and secretly keeping the money.

The Blands fear they will lose the property they wish to buy for the restaurant to another buyer. To quickly earn more cash, they attend a swingers party in search of victims. Mr. Leech, a bank lender who earlier refused to loan Mary money after she rejected his sexual advances, sees her at the party and propositions her. Mary kills him with a rattail comb and throws his body from a window. While Paul and Mary try to retrieve Mr. Leech’s possessions, the party’s host demands they join the nude guests in the hot tub or leave. Paul loses his temper and hurls an electric space heater into the hot tub, killing the partygoers and enabling him and Mary to take their money and sell their cars.

A drunken Raoul breaks into the Blands’ apartment and threatens to kill Paul for not sharing the money earned from the swingers’ cars. He announces that he intends to wed Mary and tells her to kill Paul with the frying pan. Instead, Mary lures Raoul into the kitchen and murders him.

Mary confesses her affair with Raoul to Paul, who tells her that he already knows. The Blands suddenly remember that James, the real estate agent who is helping them buy the property for the restaurant, will arrive for dinner soon. With no meat in the house and no time to go grocery shopping, they cook Raoul and serve him for dinner, describing the dish as “Spanish”. The Blands buy the building for their new restaurant, Paul and Mary’s Country Kitchen.