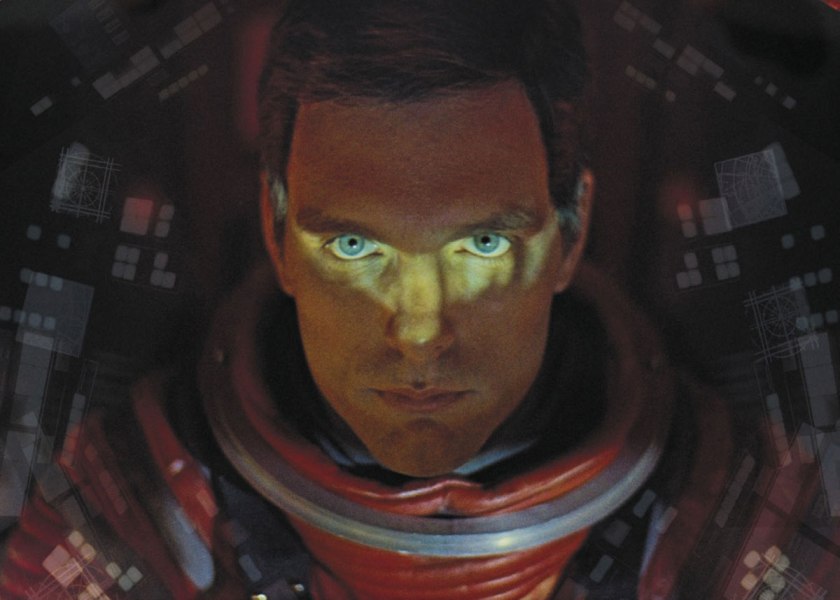 Fifty-three years ago today, the film 2001: A Space Odyssey premiered. There is an endless number of reasons to love this movie. I love the design of it. The George Nelson for Herman Miller desk, the Arne Jacobsen cutlery, those red Djinn chairs, and the Eurostile Bold Extended font. You have to watch this movie.

In the prehistoric African veldt, a tribe of hominids is driven away from its water hole by a rival tribe. Later, they awaken to find an alien monolith has appeared in their midst. Influenced by the monolith, they discover how to use a bone as a weapon and, after their first hunt, return to drive their rivals away with the newly discovered tool.

Millions of years later, Dr. Heywood Floyd, Chairman of the United States National Council of Astronautics, travels to Clavius Base, a US lunar outpost. During a stopover at Space Station 5, he meets Russian scientists who are concerned that Clavius seems to be unresponsive. Floyd refuses to discuss rumours of an epidemic at the base. Continuing his journey to Clavius, Floyd addresses a meeting of personnel to whom he stresses the need for secrecy with respect to their newest discovery. Floyd’s mission is to investigate a recently found artefact buried four million years ago near the lunar crater Tycho. Floyd and others ride in a Moonbus to the artefact, a monolith identical to the one encountered by the ape-men. As they examine the monolith, it is struck by sunlight, upon which it emits a high-powered radio signal.

Eighteen months later, the United States spacecraft Discovery One is bound for Jupiter. On board are mission pilots and scientists Dr. David Bowman and Dr. Frank Poole, along with three other scientists in suspended animation. Most of Discovery’s operations are controlled by “HAL”, a HAL 9000 computer with a human personality. A conversation between HAL and Bowman is interrupted when HAL reports the imminent failure of an antenna control device. Bowman retrieves it in an extravehicular activity (EVA) pod but finds nothing wrong. HAL suggests reinstalling the device and letting it fail so the problem can be verified. Mission Control advises the astronauts that results from their twin HAL 9000 computer indicate that HAL is in error about the device’s imminent failure. HAL attributes the discrepancy to human error. Concerned about HAL’s behaviour, Bowman and Poole enter an EVA pod so they can talk without HAL overhearing, and agree to disconnect HAL if he is proven wrong. HAL follows their conversation by lip reading.

While Poole is on a space walk attempting to replace the antenna unit, HAL takes control of his pod, severs Poole’s oxygen hose, and sets him adrift. Bowman takes another pod to rescue Poole; while he is outside, HAL turns off the life support functions of the three other crewmen in suspended animation, killing them. When Bowman returns to the ship with Poole’s body, HAL refuses to let him in, saying “I’m sorry Dave, I’m afraid I can’t do that”. HAL states that the astronauts’ plan to deactivate him jeopardises the mission. Bowman opens the ship’s emergency airlock manually, enters the ship, and proceeds to HAL’s processor core, where he begins disconnecting HAL’s circuits. HAL tries to reassure and assuage Bowman, then pleads with him to stop, and then expresses fear for himself. When the disconnection is complete, a prerecorded video message plays, revealing that the mission’s objective is to investigate the radio signal sent from the monolith to Jupiter.

At Jupiter, Bowman finds a third, much larger, monolith orbiting the planet. He leaves Discovery in an EVA pod to investigate, but is pulled into a vortex of coloured light. Bowman is carried across vast distances of space, while viewing bizarre cosmological phenomena and strange landscapes of unusual colours. Eventually he finds himself in a large neoclassical bedroom where he sees, and then becomes, older versions of himself: first standing in the bedroom, middle-aged and still in his spacesuit, then dressed in leisure attire and eating dinner, and finally as an old man lying on a bed. A monolith appears at the foot of the bed, and as Bowman reaches for it, he is transformed into a foetus enclosed in a transparent orb of light, which floats in space beside the Earth.