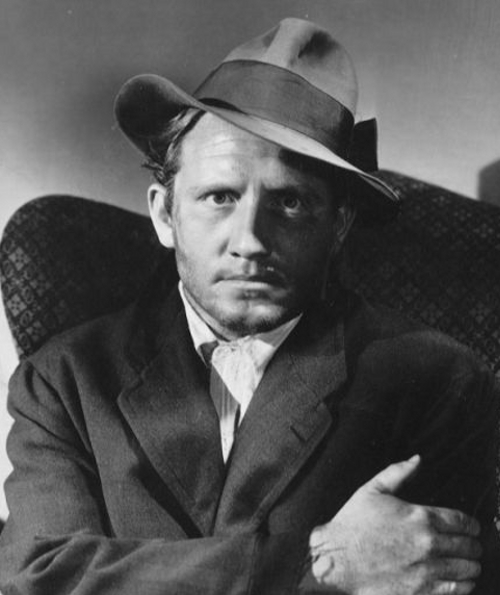 Today is the 121st birthday of the actor Spencer Tracey.  Have you seen Adam’s Rib or Guess Who’s Coming To Dinner? or Woman of the Year?  Watch the clip of his speech in Guess Who’s Coming To Dinner? below.  I know I have only named films in which he starred along side Katharine Hepburn, so I will continue:  Desk Set.  It is probably one of my very favorite films of all time.  The mid-century-ness, the actors, everything, I will always watch it if I come across and it and seek it out from time to time.  He was terrific.  The world is a better place because he was in it and still feels the loss that he has left.

BEST KNOWN FOR:  Spencer Tracy was an iconic Academy Award-winning actor known for his roles in Boys Town, Inherit the Wind and Guess Who’s Coming to Dinner.

Over his long career as an actor, Spencer Tracy played an impressive range of roles, from prisoners to priests. He managed to make each character seem believable and genuine. For more than three decades, Tracy displayed his tremendous talents on the big screen.

Spencer Bonaventure Tracy was born on April 5, 1900, in Milwaukee, Wisconsin, and grew up in Milwaukee. The youngest son of an Irish-American sales manager for a truck company, Tracy was raised Catholic, and both he and his older brother Carroll served as altar boys. The young Tracy got into trouble early on for missing school and getting into fights. According to some accounts, he went to at least 15 different elementary schools.

At the age of 18, Tracy enlisted in the U.S. Navy during World War I with friend Pat O’Brien. He never saw any action, having spent most of his time stationed in Norfolk, Virginia. After the war, Tracy spent several semesters at Ripon College, where he discovered acting. He then made his way to New York City, where he studied at the American Academy of Dramatic Arts.

Tracy spent much of the 1920s as a stage actor. In 1922, he made his Broadway debut alongside Pat O’Brien as a robot in R.U.R., a science fiction play by Kavel Capek. He also appeared in the short-lived comedy A Royal Fandango the following year. Tracy continued to appear in both comedies and dramas over the next few years, both in New York and elsewhere. In 1930, he gave a star-making performance as a convicted killer in the Broadway drama The Last Mile. Director John Ford saw Tracy in the production and wanted him for his film Up The River (1930), which also featured Humphrey Bogart.

Under now contract with Fox, Tracy made a string of films from 1930 to 1935. He was often cast as a tough guy or criminal. With 20,000 Years in Sing Sing, Tracy began to attract positive notices from critics. The film, which also starred Bette Davis, failed to draw much of an audience. He earned raves for The Power and the Glory. Written by Preston Sturges, the film examined the life of wealthy businessman (Tracy).

Tracy developed a reputation as a heavy drinker off screen. Married to Louise Treadmill since 1923, he was also known to have extramarital affairs with other performers, including Loretta Young. Tracy may have broken his marriage vows, but he and Louise never divorced. The couple had two children, John and Susan.

In 1937, Tracy achieved both commercial and critical success with Captains Courageous. Audiences and critics alike praised his performance as a Portuguese fisherman, and the film brought him his first Academy Award. Tracy picked up another Academy Award the following year for his portrayal of Father Flanagan in Boys Town.

In 1942, Tracy first appeared opposite Katharine Hepburn in Woman of the Year. The pair had tremendous chemistry, both on and off-screen. Some have commented that Tracy had finally met his match in Hepburn, and their talent for verbal sparring was dazzling in their films together. Many of their projects involved a battle-of-the-sexes theme, such as Adam’s Rib (1949). In this film, the pair played married lawyers on opposite sides of a court battle.

By the mid-1950s, Tracy’s career seemed to slow down. One memorable role from this time was Bad Day at Black Rock (1955). He played a one-armed man searching for the truth in a small desert town. Directed by John Sturges, the film also featured Lee Marvin and Ernest Borgnine. Tracy’s work with Hepburn on the comedy Desk Set (1957) was another popular picture from this time.

Tracy started the 1960s with several strong leading roles. With Inherit the Wind (1960), he brought a fictionalized version of the renowned lawyer Clarence Darrow to the big screen. The film, based on an earlier play, explored the infamous Scopes Trial of 1925, which was a legal battle over the teaching of evolution. In Judgment at Nuremburg (1961), he played an American judge presiding in a trial of his German counterparts after World War II.

In his later years, Tracy reportedly became moody and difficult and suffered from health problems, all of which affected his ability to work. In 1967, Tracy filmed his last movie, Guess Who’s Coming to Dinner, which also starred Hepburn and actor Sidney Poitier. The movie explored the subject of interracial dating. Shortly after the filming was complete, Tracy died of a heart attack on June 10, 1967, at his home in Beverly Hills, California. Hepburn had been with him during his final days.

Remembered as an actor’s actor, Tracy had the amazing ability to make his performances seem effortless. He made an unlikely box office draw, with his stocky form and craggy face. Yet still he became one of Hollywood’s most bankable names during his peak. Tracy is also forever linked to another great star, Katharine Hepburn. From their meeting on the set of Woman of the Year in 1941, they remained a couple until Tracy’s death.