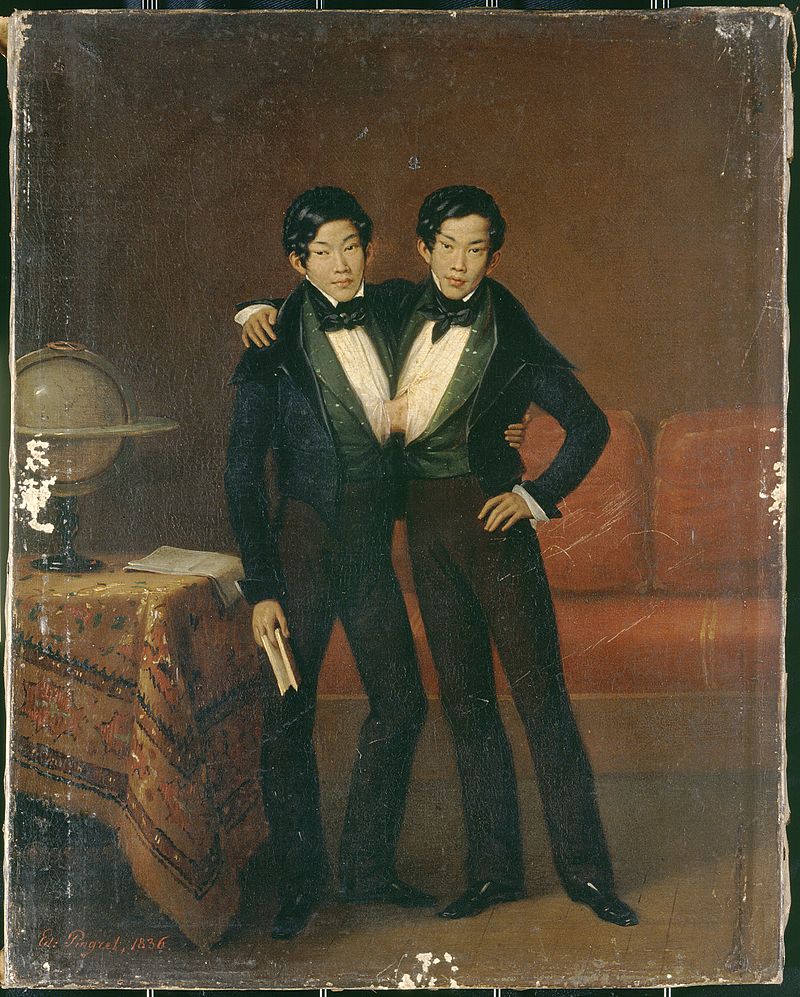 Today is the 210th birthdays of the conjoined brothers from Siam Chang and Eng Bunker. The world is a better place because they were in it and still feel the loss that they have left.

BEST KNOWN FOR: Chang Bunker and Eng Bunker were Siamese-American conjoined twin brothers whose fame propelled the expression “Siamese twins” to become synonymous for conjoined twins in general. They were widely exhibited as curiosities and were “two of the nineteenth century’s most studied human beings”.

Eng and Chang Bunker, the first Siamese twins to receive world-wide attention, were born in the fishing village of Meklong, Siam, of obscure parentage. Their nationality became the name for the birth defect in which two persons are physically joined together. Eng and Chang, unlike some grotesquely deformed Siamese twins, were completely normal except for a thick but pliable band of flesh connecting them at the chest. During their childhood the band became stretched enough to allow them to stand side by side with relative freedom of movement. The condition initially caused alarm and consternation among the villagers, some of whom feared the extraordinary birth as a harbinger of doom. Because of a determined mother and their own adaptability, the two boys grew up as normally as possible, even raising ducks to help support their family, and were gradually accepted by the community.

The twins would probably have lived out their lives in obscurity had it not been for a Scottish trader, Robert Hunter, and a New England sea captain, Abel Coffin, who in April 1829 persuaded the twins to go abroad with them. They arrived in Boston in August of that year, having acquired a working knowledge of English on the voyage. During the following eight years, they toured the United States and Europe, first under the auspices of Hunter and Coffin and later with P. T. Barnum. They drew large crowds wherever they went, performing feats of strength and dexterity. They also caused considerable stir among the medical profession, whose members never tired of conducting tests on them and speculating on the cause of and solution to their malady.

Eng and Chang, in their mid-twenties, gave up their original plans of returning to Siam. They decided to become naturalized American citizens, to break with Barnum, and to conduct their own shows. Upon learning that a surname was one of the requirements for naturalization, they accepted the suggestion of a bystander, Fred Bunker, that they use his name.

Touring on their own, the twins acquired considerable wealth but grew weary of life on the road. At the suggestion of Dr. James C. Calloway of Wilkesboro, who met Eng and Chang in New York, they included Wilkesboro in their itinerary. They arrived there on 7 June 1837 and found the quiet little community and surrounding countryside much to their liking. Within two years they stopped touring and opened a general store in Traphill, a nearby community. They also bought some land and began raising corn and hogs.

Shortly after settling in Traphill, Eng and Chang struck up a friendship with two sisters, Adelaide and Sarah Yates. When it became apparent that a romantic relationship was developing among them, the community was outraged. Nevertheless, they were married 13 Apr. 1843, Eng to Sarah and Chang to Adelaide. The former couple eventually had ten children, the latter twelve. All were normal, with the exception of a boy and girl of Chang’s, who were deaf mutes.

As their families grew, the twins found it necessary to establish separate residences. In 1846 they moved to nearby Surry County, where they built two houses about a mile apart on the same tract of land. The families of each of the twins stayed at their respective houses, while Eng and Chang took turns visiting every three days. They followed this pattern for the rest of their lives.

The prosperity they achieved as farmers was devastated by the Civil War. To recoup their fortune, they reluctantly decided to rejoin Barnum and tour once again. No longer having the exuberance of youth, they bolstered their spirits with the hope that while touring in Europe they could find a doctor who would separate them. Chang had become dissipated from drinking too much, and was losing his health; consequently, they were becoming irritable toward each other. Unfortunately, no doctor would touch them. They returned home in 1871, having accumulated money but having lost the last hope of separation, which had become the most important thing in their lives.

On the voyage across the Atlantic, Chang suffered a stroke and partial paralysis. He recovered partially, but from that time his health began to decline inexorably. It is remarkable that their families managed to endure the strain as well as they apparently did, considering the increasing severity and frequency of the twins’ fights. On 12 Jan. 1874, Chang was stricken with severe bronchitis, accompanied by chest pains. The condition grew worse, and he died in his sleep in the early morning of 17 Jan. Although there was nothing organically wrong with Eng, he was horrified upon waking to find his twin dead, thinking that he would soon follow: they had always regarded themselves as one, signing their names “Chang Eng,” rather than “Chang and Eng.” A doctor was summoned to try to perform a desperate operation, but Eng died before he arrived. An autopsy conducted in Philadelphia led doctors to conclude that while Chang had died of a cerebral clot brought on by the previous stroke, complicated by pneumonia, Eng had actually died of fright. A partial examination of the connecting band, limited by the family’s wish that it not be cut from the front, revealed that their lives were connected by a “quite distinct extra hepatic tract” and that an artery and some nerve connections ran between them; thus, Eng may have suffered from loss of blood from Chang’s dying body.

They were buried in a common grave in the White Plains Baptist Church cemetery in Surry County. They were survived by their wives and all but one of their children.