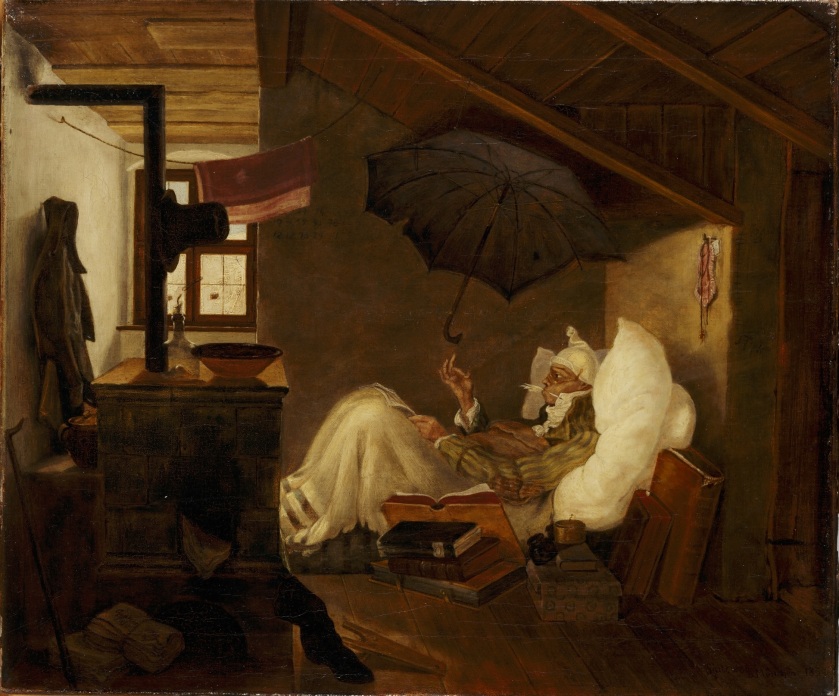 It was reportedly Hitler’s favorite painting. Painted in 1839, Carl Spitzweg’s The Poor Poet was very much a product of its time. In it, the artist satirizes the bohemian gentlemen who felt they needed to suffer for their art. In its day, it was hugely popular, transforming Spitzweg from a pharmacist who painted in his spare time, to one of the most acclaimed artists in Germany. And while the Fuhrer’s admiration undoubtedly tarnished its reputation – after all, Hitler hardly had good taste in art, despite his pretenses – it remained popular. So popular, in fact, that it has been stolen not once but twice.

On the first occasion, in 1976, a German performance artist stole The Poor Poet from off the walls of the New National Gallery in Berlin. He was chased by the museum guards but managed to get into his car and drive away. He then drove to a working-class neighborhood of Berlin and hung the famous painting up on the wall of an immigrant family’s home. The stunt was designed to highlight the discrimination Turkish newcomers were facing in German society at the time. Regardless of whether or not he succeeded, the painting was quickly recovered and returned to the museum.

The painting was stolen again in 1989, however. This time, a visitor in a fake wheelchair managed to take this painting and another similarly small work by Spitzweg off the walls and smuggle them out right under the nose of the security guards. This time around, there was no happy ending. Neither of the paintings have been recovered. Moreover, since both works are compact and easy to hide, and since there was no CCTV back in 1989, it’s likely that Hitler’s favorite painting will remain missing, presumed lost for good. And, what’s more, these two aren’t the only Spitzweg paintings whose location is unknown. In all, some 36 works from the German artist’s vast output remain missing, almost all of them having been stolen.