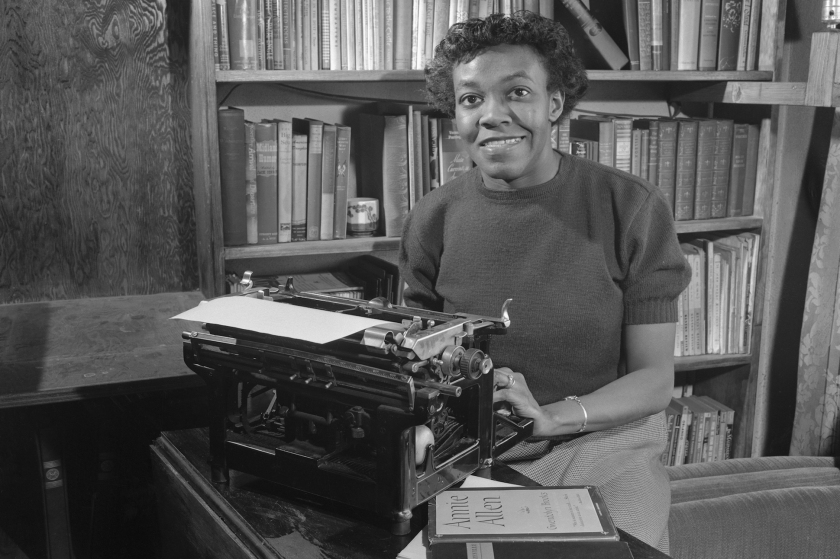 Today is the 104th birthday of the poet Gwendolyn Brooks. She is the first African American to win a Pulitzer Prize. Her work is incredible. The world is a better place because she was in it and still feels the loss that she has left.

BEST KNOWN FOR: Gwendolyn Brooks was a postwar poet best known as the first African American to win a Pulitzer Prize for her 1949 book Annie Allen.

Brooks was born on June 7, 1917, in Topeka, Kansas. When Brooks was six weeks old, her family moved to Chicago as part of the Great Migration. She was known as “Gwendie” to close friends and family during her childhood.

Brooks attended three high schools: the prestigious, integrated Hyde Park High School; the all-Black Wendell Phillips Academy High School; and the integrated Englewood High School. The racial prejudice that she encountered at some of these institutions would shape her understanding of social dynamics in the United States and influence her writing. In 1936, Brooks graduated from Wilson Junior College, having already begun to write and publish her work.

They eat beans mostly, this old yellow pair.
Dinner is a casual affair.
Plain chipware on a plain and creaking wood,
Tin flatware.

Two who are Mostly Good.
Two who have lived their day,
But keep on putting on their clothes
And putting things away.

And remembering …
Remembering, with twinklings and twinges,
As they lean over the beans in their rented back room that is full of beads and receipts and dolls and cloths, tobacco crumbs, vases and fringes.

Brooks began writing at an early age. She published her first poem in a children’s magazine at age 13. By 16, she had published approximately 75 poems. She began submitting her work to the Chicago Defender, a leading African American newspaper. Her work included ballads, sonnets and free verse, drawing on musical rhythms and the content of inner-city Chicago. She would later say of this time in her life, “I felt that I had to write. Even if I had never been published, I knew that I would go on writing, enjoying it and experiencing the challenge.”

Brooks worked as a secretary to support herself while she developed as a poet. She took part in poetry workshops, including one organized by Inez Cunningham Stark, an affluent woman with a literary background. While Stark was white, all of the participants in her workshop were African American. Brooks made great strides during this period, garnering official recognition. In 1943, her work received an award from the Midwestern Writers’ Conference.

Brooks published her first book of poetry, A Street in Bronzeville, in 1945. The book was an instant success, leading to a Guggenheim Fellowship and other honors. Her second book, Annie Allen, appeared in 1949. Brooks won the Pulitzer Prize in poetry for Annie Allen, making her the first African American to win the coveted Pulitzer. Other honors received throughout her lifetime include Poetry magazine’s Eunice Tietjens Prize.

In the early 1960s, Brooks embarked on a teaching career as an instructor of creative writing. She taught at Columbia College in Chicago, Chicago State University, Northeastern Illinois University, Columbia University and the University of Wisconsin. She also continued to write and publish.

And if sun comes
How shall we greet him?
Shall we not dread him,
Shall we not fear him
After so lengthy a
Session with shade?

Though we have wept for him,
Though we have prayed
All through the night-years—
What if we wake one shimmering morning to
Hear the fierce hammering
Of his firm knuckles
Hard on the door?

Shall we not shudder?—
Shall we not flee
Into the shelter, the dear thick shelter
Of the familiar
Propitious haze?

Sweet is it, sweet is it
To sleep in the coolness
Of snug unawareness.

The dark hangs heavily
Over the eyes.

In 1960 she published her third book of poetry, The Bean Eaters, which included her beloved “We Real Cool,” a poem that explores themes of youth, rebellion and morality. In an interview, Brooks said she found her inspiration to write “We Real Cool” when she stumbled upon a pool hall of boys in her neighborhood and quietly wondered how they felt about themselves. She also went on to publish her long poem “In the Mecca” in 1968, which was nominated for a National Book Award in poetry.

Gwendolyn Brooks died of cancer on December 3, 2000, at the age of 83, at her home in Chicago, Illinois. She remained a resident of Chicago’s South Side until her death. She is buried at Lincoln Cemetery in Blue Island, Illinois.