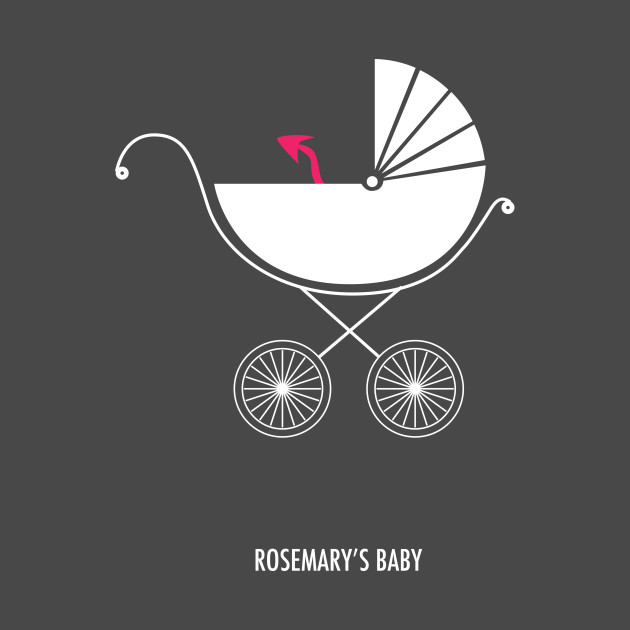 Fifty-three years ago today, the film Rosemary’s Baby premiered. I was too young the first time I saw this movie and remember thinking Ruth Gordon was one creepy old lady. I have seen it multiple times since then and really love it. You have to watch this movie.

In 1965 Guy and Rosemary Woodhouse rent a recently vacated apartment in the Bramford, a large Gothic building in New York City, after the previous tenant, an elderly woman, fell into a coma and died. Guy and Rosemary ignore their friend Hutch’s warning about the Bramford’s dark past involving witchcraft and murder.

Rosemary meets a young woman, Terry Gionoffrio, a recovering drug addict whom Minnie and Roman Castevet, the Woodhouses’ elderly next-door neighbors, took in from the street. Rosemary admires a pendant necklace the Castevets gave to Terry but dislikes its content’s pungent odor. One night, Terry apparently jumps to her death from the Castevets’ seventh-floor apartment. Soon the Castevets befriend Guy and Rosemary; Guy grows increasingly fond of them, but Rosemary finds them annoying and meddlesome. Minnie gives Terry’s pendant to Rosemary as a good luck charm containing “tannis root”.

Guy lands an important role in a play after the original actor inexplicably goes blind. With his career on track, Guy wants to have a baby with Rosemary. On the night they plan to conceive, Minnie brings them individual cups of chocolate mousse. Guy chastises Rosemary for complaining hers has a chalky “under-taste”. She eats only a small portion before secretly discarding the rest. She passes out and experiences a dreamlike vision in which a demonic presence rapes her as Guy, the Castevets, and other Bramford tenants — all nude — watch. The next morning, Rosemary’s body is covered in scratches. Guy says they had sex while she was unconscious since he did not want to miss “baby night”.

When Rosemary becomes pregnant, the Castevets insist she go to their close friend Dr. Abraham Sapirstein, a prominent obstetrician, rather than her own physician, Dr. Hill. During her first trimester, Rosemary suffers severe abdominal pains and loses weight, though Dr. Sapirstein attributes it to temporary stiff pelvic joints. Her gaunt appearance alarms Hutch, who later researches the Bramford’s history and Roman Castavet. The night before Hutch is to meet with Rosemary to share his findings, he falls into a mysterious coma. Rosemary, unable to withstand the pain, insists she must visit Dr. Hill; Guy is angry because he worries Dr. Sapirstein will be offended. As they argue, the pains suddenly stop and Rosemary feels the baby move for the first time.

Three months later, Hutch’s friend, Grace Cardiff, calls Rosemary to inform her Hutch is dead. Before dying, he briefly regained consciousness and told Grace to give Rosemary a book on witchcraft along with the cryptic message: “The name is an anagram”. Rosemary studies the book and deduces that Roman Castevet is an anagram for Steven Marcato, the son of a former Bramford resident and a reputed Satanist. She suspects the Castevets and Dr. Sapirstein belong to a Satanic coven and have sinister plans for her baby. Guy discounts her suspicions and throws the book away, making her think he may be conspiring with them.

Terrified, Rosemary visits Dr. Hill for help. Assuming she is delusional, he calls Dr. Sapirstein, who arrives with Guy to take Rosemary home. They assure her that neither she nor the baby will be harmed. Rosemary locks herself in the apartment, but coven members infiltrate and restrain her. Dr. Sapirstein sedates an hysterical Rosemary, who goes into labor and gives birth. When she awakens, she is told the baby was stillborn. As Rosemary recovers, she hears an infant crying that Guy claims belongs to new tenants.

Believing her baby is alive, Rosemary discovers a hidden door leading into the Castevets’ apartment. The Castevets, Guy, Dr. Sapirstein and other coven members are gathered around a bassinet. Peering inside, Rosemary is horrified and demands to know what is wrong with her baby. Roman tells her the baby, Satan’s son, has his father’s eyes and urges Rosemary to mother her child. When Guy tries to calm Rosemary by claiming they will be generously rewarded and can conceive their own child, Rosemary spits in his face. After hearing the infant’s cries, Rosemary gently rocks the cradle.