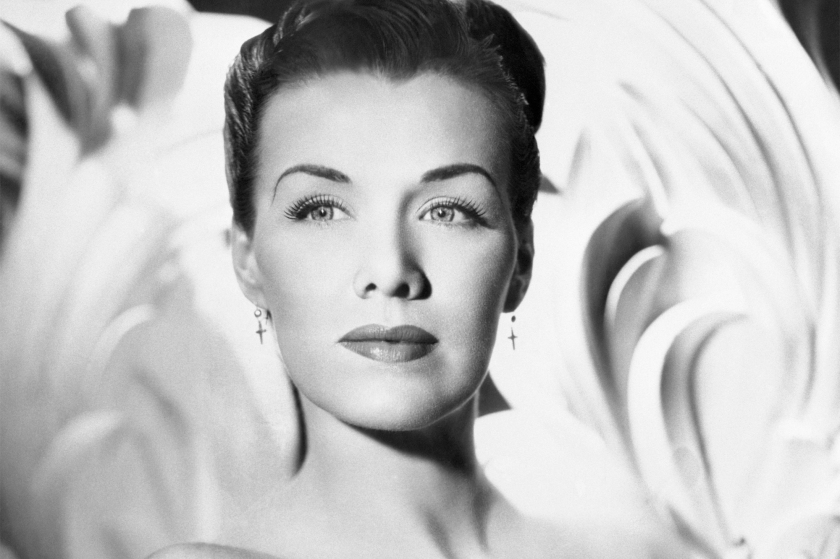 Today is the 98th birthday of the actress Jean Spangler. She disappeared 72 years ago in Los Angeles, California during the time when young dark-haired inspiring actresses were being murdered. There are only theories to her last chapter. Her missing person case is still open with the LAPD.

BEST KNOWN FOR: Jean Elizabeth Spangler was an American dancer, model, and actress who appeared in bit parts in several Hollywood films in the late 1940s. She garnered public attention for her mysterious disappearance in late 1949.

Jean Spangler was born in Seattle, Washington. She attended Franklin High School in Los Angeles, California, and graduated in 1941. As a teen, Spangler had danced with the Earl Carroll Theatre and Florentine Gardens.

In 1942, Spangler married manufacturer Dexter Benner. They had a daughter, Christine (born April 22, 1944), and divorced in 1946. Spangler and Benner engaged in a long custody battle over their daughter, until Spangler was eventually awarded custody in 1948. At the time of her disappearance, she lived with her mother Florence, five-year-old daughter Christine, brother Edward, and sister-in-law Sophie, on Colgate Avenue in the Park La Brea residential complex near Wilshire Boulevard.

On Friday, October 7, 1949, Spangler left her home in Los Angeles around 5:00 p.m. She left her daughter with Sophie and said that she was meeting Benner to discuss a late child support payment; after that, she was going to work on a night shoot for a film. Two hours after leaving, Spangler called home and spoke with Sophie as well as her daughter; she told Sophie she would “have to work the full eight hours” and would probably not return home that evening. At the time, Spangler’s mother Florence was out of town visiting family in Louisville, Kentucky. The following morning, October 8, Sophie went to the police and filed a missing person report after Spangler failed to return home. Though Spangler had told her sister-in-law that she was going to work on a film set after she met with Benner, police checked with studios and the Screen Extras Guild and found no records indicating she had worked that night. saleswoman at Farmers Market, a grocery store only a few blocks from Spangler’s home, recalled seeing her browsing in the store around 6 p.m., and noted that she “appeared to be waiting for someone.” This was the last known sighting of Spangler. Police questioned Benner about her statement to Sophie that she was going to meet him about his child support payments. He claimed that he had not seen his former wife for several weeks. His new wife, Lynn Lasky Benner (1924-2019), to whom he had been married only one month, corroborated his story.

On October 9, 1949, Spangler’s purse was found near the Fern Dell entrance of Griffith Park in Los Angeles, approximately 5.5 miles (8.9 km) from her home. Both of the straps on one side of the purse were torn loose as if it had been ripped from her arm. Sixty police officers and over one hundred volunteers searched the 4,107-acre natural terrain park, but no other clues were found.[1] There was no money in the purse (Sophie said that she had no money when she left her house the evening of her disappearance) so the police ruled out robbery as a motive. There was a note in the purse addressed to a “Kirk”, which read: “Kirk: Can’t wait any longer, Going to see Dr. Scott. It will work best this way while mother is away,”. The note ended in a comma.

Neither “Kirk” nor “Dr. Scott” could be located, and neither Spangler’s family nor her friends knew anyone by those names. When Spangler’s mother, Florence, returned to Los Angeles, she told police that someone named “Kirk” had picked up Jean at her house twice but stayed in his car and did not come in. Police questioned every doctor with the last name Scott in Los Angeles, but none of them had a patient with the last name Spangler or Benner, her married name. Spangler had once been involved with an abusive man she called “Scotty,” but her lawyer said she had not seen him since 1945. Griffith Park was searched over the following week by over 200 volunteers and law enforcement. During the search, one volunteer’s dog dug up a denim Los Angeles County Jail uniform in a shallow hole, but no other belongings of Spangler were found.

At the time she disappeared, Spangler had recently completed filming a bit part in the film Young Man with a Horn starring Kirk Douglas; this led to public speculation that he was the Kirk mentioned in the note found in her purse. Upon reading about the discovery of the note, Douglas himself called the police and denied that he knew Spangler. Later, when interviewed via telephone by the head of the investigating team, Douglas admitted that he had “talked and kidded with her a bit” on set, but that he had never spent time with her outside of the film production. On October 12, Douglas gave a formal press statement in which he said: “I told Detective Chief Thad Brown that I didn’t remember the girl or the name until a friend recalled it was she who worked as an extra in a scene with me in my picture Young Man with a Horn … then I recalled that she was a tall girl in a green dress. I talked and kidded with her a bit on the set … But I never saw her before or after that and have never been out with her.”

Spangler’s girlfriends told police that she was three months pregnant when she disappeared and that she had talked about having an abortion, which at the time was illegal. Witnesses, who frequented the same nightclubs and bars as Spangler, told police they had heard of a former medical student known as “Doc”, who performed abortions for money, but police could not locate him, nor prove that he existed. The theory that Spangler disappeared under circumstances related to a botched abortion attempt was investigated by the Los Angeles Police Department (LAPD). Spangler had also told her friend, actor Robert Cummings, that she was having a casual affair at the time, but did not mention the identity of the man. When Cummings asked her if it was serious, she responded: “No. But I’m having the time of my life.”

At the time, some newspapers reported that Spangler was feared to be one of several female victims in a series of killings in Los Angeles, potentially linked to the Black Dahlia murder in 1947. Another theory investigated by police was that Spangler’s disappearance was related to Los Angeles gangsters with whom she purportedly was associated. According to historian Jon Lewis in his book Hard-Boiled Hollywood: Crime and Punishment in Postwar Los Angeles, Spangler had worked for a time as a dancer at Florentine Gardens, a nightclub owned by Mark Hansen and Nils Thor Granlund. Lewis claims that her acquaintance with Hansen and Granlund “put her in the orbits” of various mob affiliates, including Anthony Cornero and Mickey Cohen.[16] Spangler had allegedly been seen with Davy Ogul, an associate of Cohen’s, in Palm Springs, as well as in Las Vegas, Nevada with Ogul and Frank Niccoli, another associate of Cohen’s. Ogul disappeared on October 9, 1949, two days after Spangler. This led police to investigate the possibility that Spangler and Ogul, who was under indictment for conspiracy, had fled to avoid prosecution. Police interrogated Thomas Ellery Evans, a gangster and acquaintance of Ogul, during their investigation. In April 1950, Spangler’s sister Betsy testified that neither she nor her sister were ever acquainted with Ogul, Cohen, or any of his associates.

In 1950, a customs agent in El Paso, Texas reported seeing Ogul and a woman who looked like Spangler in a local hotel. The hotel clerk identified Spangler from a photograph, but neither Ogul nor Spangler’s names appeared on the hotel register.

Shortly after Spangler disappeared, custody of her and Benner’s daughter, Christine, was temporarily awarded to Benner on October 27, 1949. The following year, a custody battle ensued between Benner and Florence, to whom he denied visitation with Christine. Benner defied a court order that he permit Spangler’s mother to visit the child. When he was ordered to serve fifteen days in jail for being in contempt of court, he fled California with his daughter, later settling in Florida.

The LAPD continued the search and circulated Spangler’s picture for several years, in an unsuccessful attempt to find her or any reliable leads. Columnist Louella Parsons offered a $1,000 reward for information concerning Spangler’s disappearance or location. Despite a nationwide search, no further clues have surfaced. Possible sightings included northern and southern California, Phoenix, Arizona, and Mexico City over the next two years, but none of those sightings could be validated. She is still listed as a missing person, and the LAPD has not closed the case.