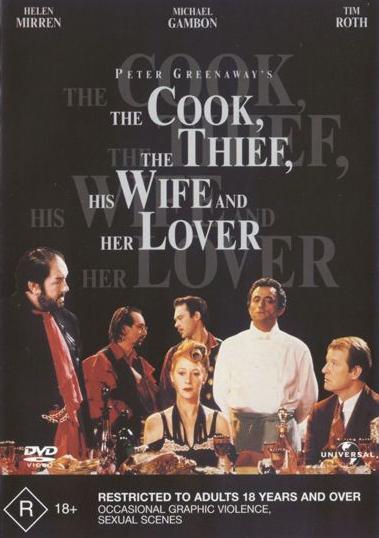 Thirty-two years ago today, the film The Cook, the Thief, His Wife & Her Lover premiered at the Toronto International Film Festival. Simply a beautiful movie to watch, with great actors. You must see this movie.

English gangster Albert Spica has taken over the high-class Le Hollandais Restaurant, managed by French chef Richard Boarst. Spica makes nightly appearances at the restaurant with his retinue of thugs. His oafish behavior causes frequent confrontations with the staff and his own customers, whose patronage he loses, but whose money he seems not to miss.

Forced to accompany Spica is his reluctant, well-bred wife, Georgina, who soon catches the eye of a quiet regular at the restaurant, bookshop owner Michael. Under her husband’s nose, Georgina carries on an affair with Michael with the help of the restaurant staff. Ultimately Spica learns of the affair, forcing Georgina to hide out at Michael’s book depository. Boarst sends food to Georgina through his young employee Pup, a boy soprano who sings while working. Spica tortures the boy before finding the bookstore’s location written in a book the boy is carrying. Spica’s men storm Michael’s bookshop while Georgina is visiting the boy in hospital. They torture Michael to death by force-feeding him pages from his books. Georgina discovers his body when she returns.

Overcome with rage and grief, she begs Boarst to cook Michael’s body, and he eventually complies. Together with all the people that Spica wronged throughout the film, Georgina confronts her husband finally at the restaurant and forces him at gunpoint to eat a mouthful of Michael’s cooked body. Spica obeys, gagging. Georgina then shoots him in the head, calling him a cannibal.