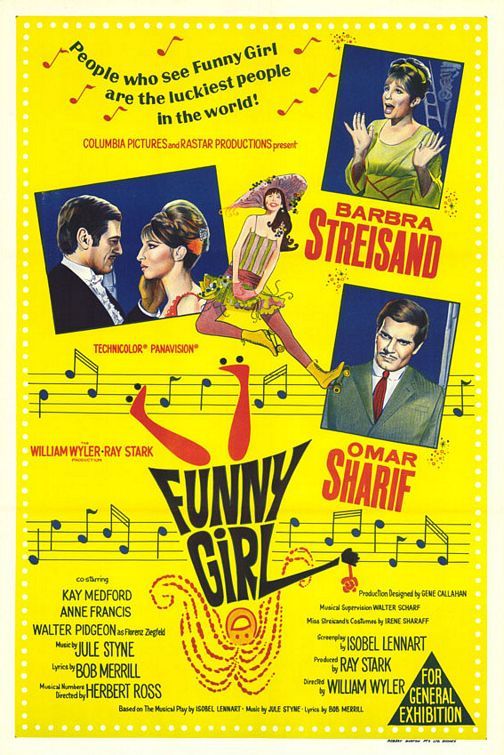 Hello Gorgeous! Fifty-three years ago today, the film Funny Girl premiered. This movie is so great, you simply have to watch it soon.

Set in and around New York City just prior to and following World War I, the story opens with Ziegfeld Follies star Fanny Brice awaiting the return of husband Nicky Arnstein from prison, and then moves into an extended flashback focusing on their meeting and marriage.

Fanny is first seen as a stage-struck teenager who gets her first job in vaudeville and meets the suave Arnstein following her debut performance. They continue to meet occasionally over the years, becoming more romantically involved as Fanny’s career flourishes and she becomes a star. Arnstein eventually seduces Fanny, who decides to abandon the Follies to be with him.

After winning a fortune playing poker while traveling aboard the RMS Berengaria, Nicky agrees to marry Fanny. They move into an expensive house and have a daughter, and Fanny eventually returns to Ziegfeld and the Follies. Meanwhile, Nicky’s various business ventures fail, forcing them to move into an apartment. Refusing financial support from his wife, he becomes involved in a bonds scam and is imprisoned for embezzlement for eighteen months.

Following Nicky’s release from prison, he and Fanny agree to separate.