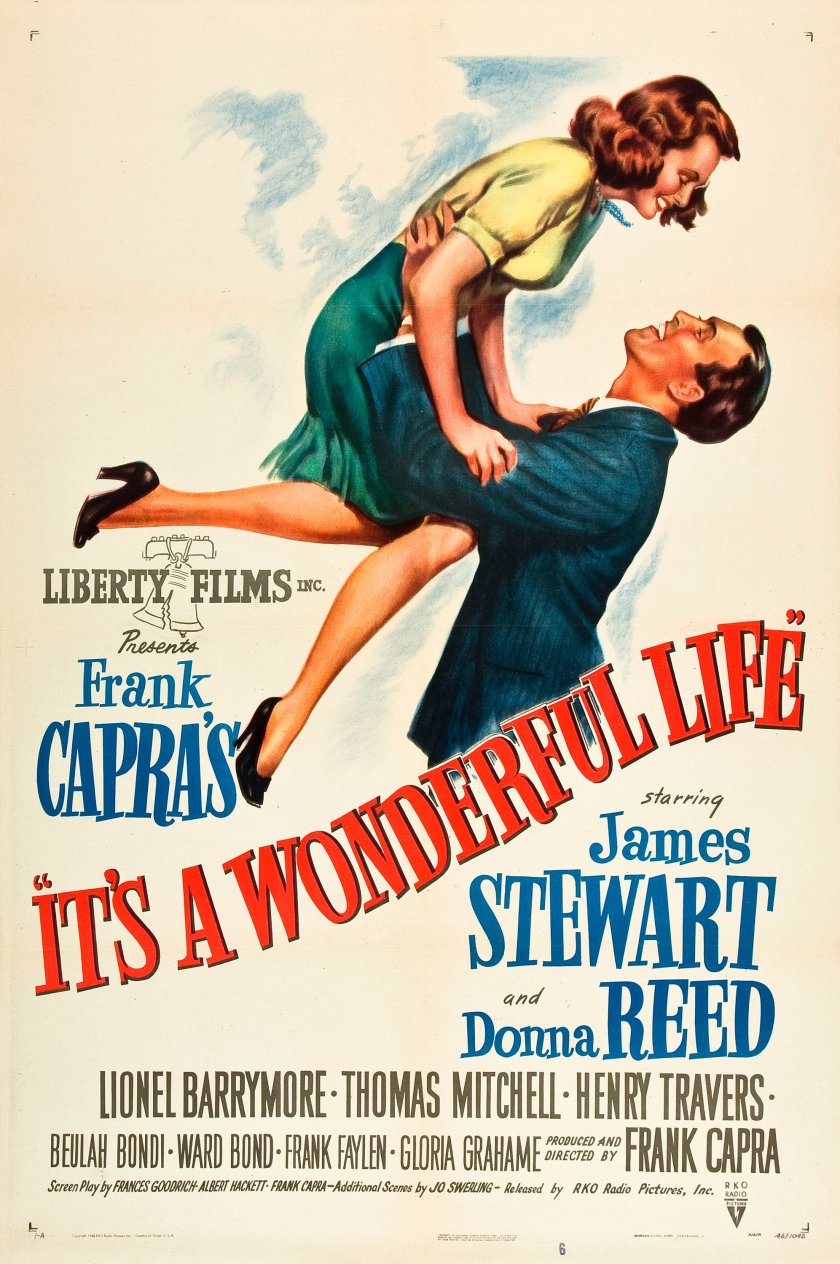 Seventy-five years ago today, the film It’s a Wonderful Life premiered. It is widely considered one of the greatest films of all time. The director Frank Capra said it was his very favorite of all the films he directed. You have to see this movie.

It is commonly believed that the characters of Bert and Ernie on Sesame Street were named after Bert the cop and Ernie the cabdriver; however, in a correction for the 1999 “Annual Xmas Quiz” in the San Francisco Chronicle, which made this claim, series writer Jerry Juhl confirmed that, per producer Jon Stone, the shared names were merely a coincidence. Despite this, the 1996 holiday special Elmo Saves Christmas references the rumor, during a scene where Bert and Ernie walk by a TV set, which is playing the movie. The pair are surprised by the line: “Bert! Ernie! What’s the matter with you two guys? You were here on my wedding night!”

In 1990, the film was designated as “culturally, historically or aesthetically significant” and added to the National Film Registry of the Library of Congress.

On Christmas Eve 1945, in Bedford Falls, New York, 38-year-old George Bailey contemplates suicide. The prayers of his family and friends reach heaven, where Angel 2nd class Clarence Odbody is assigned to save George to earn his wings. Clarence is shown flashbacks of George’s life. He watches 12-year-old George save his brother, Harry, from drowning but lose hearing in his left ear. Later, George prevents the distraught town druggist, Mr. Gower, from accidentally poisoning a child’s prescription.

In 1928, George plans a world tour before college and is reintroduced to Mary Hatch, who has always had a crush on him. The attraction is now mutual. When his father suffers a stroke and dies, George postpones his travel to sort out the family business, Bailey Brothers Building and Loan, which avaricious board member Henry F. Potter, who controls most of the town’s businesses, seeks to dissolve. The other board members vote to keep the Building and Loan open if George will run it. George acquiesces and works alongside his uncle, Billy, and gives his tuition to Harry, with the understanding that Harry will run the business when he graduates.

Harry returns from college married and with an excellent job offer from his father-in-law. George is dejected but doesn’t stand in Harry’s way and continues running the Building and Loan. Immediately following their wedding, George and Mary witness a run on the bank, and use their $2,000 honeymoon savings to keep the Building and Loan solvent.

Under George’s leadership, the company eventually establishes Bailey Park, a modern housing development to rival Potter’s overpriced slums. Potter offers George $20,000 a year to be his assistant, but, realizing that Potter’s true intention is to shut down the Building and Loan, George rebuffs and rebukes him.

During World War II, George is ineligible for service because of his deaf ear. Harry becomes a Navy pilot and earns the Medal of Honor for shooting down a kamikaze plane headed for a troop transport. On Christmas Eve 1945, as the town prepares a hero’s welcome for Harry, Billy goes to the bank to deposit $8,000 of the Building and Loan’s cash. Billy taunts Potter with a newspaper headline about Harry, but unintentionally wraps the envelope of cash in Potter’s newspaper and hands it to Potter. Potter finds the envelope but says nothing, while Billy cannot recall how he misplaced the cash. With a bank examiner reviewing the company’s records, George realizes scandal and criminal charges will follow. Fruitlessly retracing Billy’s steps, George berates him and takes out his frustration on his family.

George desperately appeals to Potter for a loan, offering his life insurance policy with $500 in equity as collateral. Based on the policy’s $15,000 nominal value, Potter says George is worth more dead than alive, and phones the police to arrest him for misappropriation of funds. George flees, gets drunk at a bar, and prays in vain for help. Suicidal, he goes to a nearby bridge, but before he can jump, Clarence dives into the river. George leaps in and rescues him.

When George wishes he had never been born, Clarence shows him a timeline in which he never existed. Bedford Falls is now Pottersville, an unsavory town occupied by sleazy entertainment venues, crime, and amoral people. The lives George touched are vastly different. The druggist, Mr. Gower, was imprisoned for manslaughter since George was not around to prevent him from poisoning the pills. George’s mother doesn’t know him, and reveals that Billy was institutionalized after the Building and Loan failed. Bailey Park is a cemetery, where George discovers young Harry’s grave. Since George did not save Harry, Harry was not there to save the soldiers on the transport ship. George finds that Mary is a spinster librarian. When he claims to be her husband, she screams for the police and George runs away.

Now convinced that Clarence is his guardian angel, George returns to the bridge and begs for his life back. The original reality is restored, and a grateful George rushes home to await his arrest. Mary and Billy arrive after rallying the townspeople, who donate more than enough to cover the missing $8,000. Harry arrives and toasts George as “the richest man in town”. George receives a copy of The Adventures of Tom Sawyer as a gift from Clarence, with a note reminding George that no man is a failure who has friends, and thanking him for his wings. At that moment, a bell on the Christmas tree rings. George’s youngest daughter explains that it means that an angel has earned his wings, signifying Clarence’s promotion.