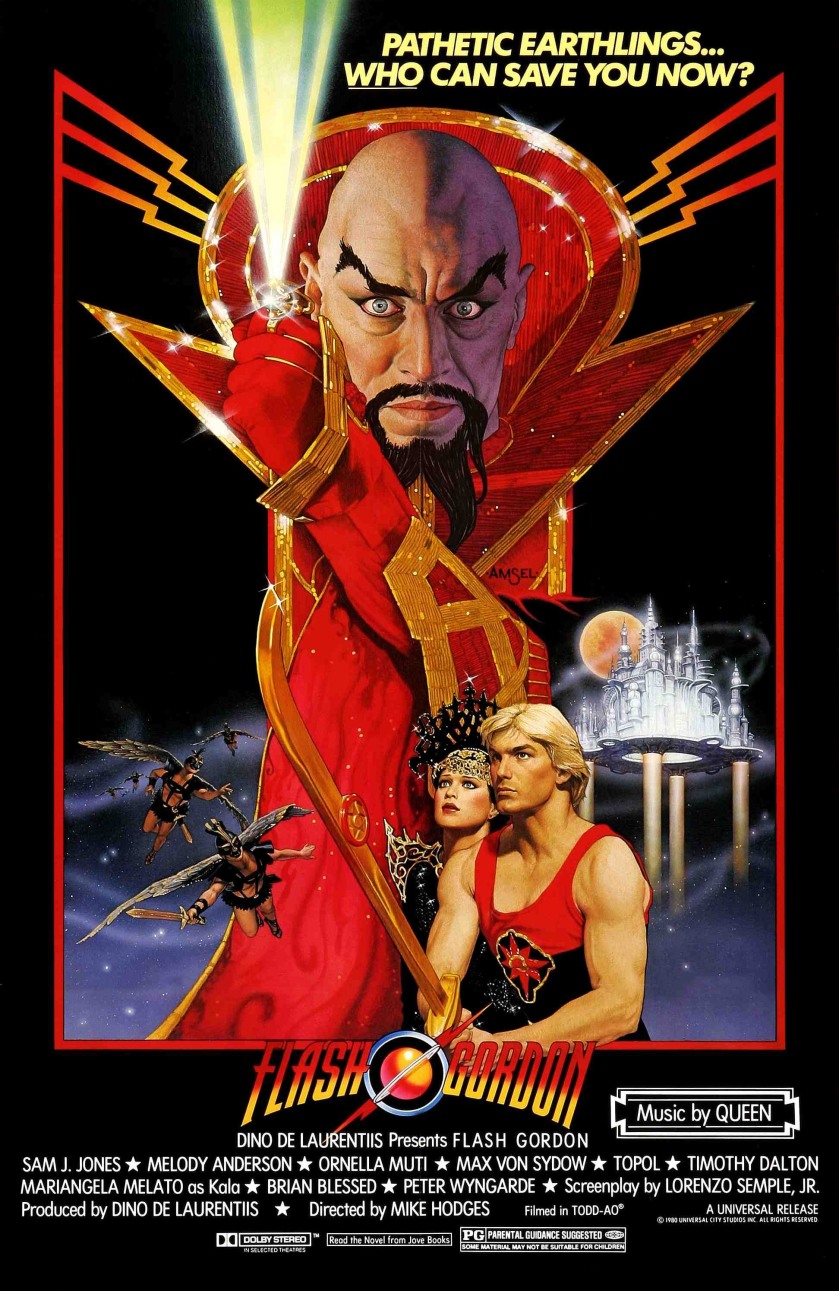 Forty-one years ago today, the film Flash Gordon premiered. It’s called a ‘space opera’ and I cannot think of a better description. It is good in a way that it seems like it defies logic as to how it got made. Like a cocaine-fueled fever-dream became a movie that Queen did the soundtrack for. You should really see it.

To relieve his boredom, Emperor Ming the Merciless of the planet Mongo declares that he will play with and destroy Earth by remotely causing natural disasters. On Earth, New York Jets football star “Flash” Gordon boards a small plane, where he meets travel agent Dale Arden. Mid-flight, the cockpit is hit by a meteorite and the pilots are lost. Flash takes control and manages to crash land into a greenhouse owned by Dr. Hans Zarkov. Zarkov, who believes the disasters are being caused because an extraterrestrial source is pushing the moon towards Earth, has secretly constructed a spacecraft that he plans to use to investigate. Zarkov’s assistant refuses to go, so Zarkov lures Flash and Dale aboard. The rocket launches, taking them to Mongo, where they are captured by Ming’s troops.

The trio is brought before Ming, who orders Dale be prepared for his pleasure. Flash tries to resist, but is overpowered. Ming orders Zarkov be reprogrammed and Flash executed. Ming’s daughter, Princess Aura, seduces Ming’s surgeon into saving Flash, to whom she is attracted. As they escape, Flash sees Zarkov being brainwashed by Klytus, the metal-faced head of the secret police. Aura and Flash flee to Arboria, kingdom of Prince Barin, Aura’s lover. En route, Aura teaches Flash to use a telepathic communicator to contact Dale. He lets her know he is alive. Dale is locked in Ming’s bedchamber but, encouraged by Flash, she escapes. Klytus sends Zarkov to intercept Dale, who tells him and Klytus that Flash is alive. Zarkov then reveals he resisted the brainwashing, and escapes Mingo City with Dale. They are quickly captured by Prince Vultan’s Hawkmen and taken to Sky City.

Aura and Flash arrive at Arboria. Aura asks the Prince to keep Flash safe. A distrustful Barin, in love with Aura, agrees not to kill Flash, but then forces him to perform a deadly ritual. Barin and Flash take turns sticking their hands into a hollow stump with a giant scorpion-like Wood Beast inside. When Flash has to take an extra turn, he pretends to be stung as a distraction and escapes. Barin follows, but they are both captured by the Hawkmen.

Klytus informs Ming that Flash is alive and is given authority to find out who is responsible. Aura returns and is taken prisoner and tortured by Klytus and General Kala. They force her to confess and Ming orders her banished to the ice moon Frigia once his wedding has taken place. Meanwhile, Flash and Barin are taken to Sky City, where Flash and Dale are briefly reunited. Flash is forced to fight Barin in a death match, but Flash instead saves Barin’s life, causing Barin to join him. Klytus arrives and Flash and Barin kill him. Knowing this will bring retribution, Vultan orders the Hawkmen to evacuate, leaving Barin, Flash, Dale and Zarkov behind. Ming’s ship arrives and he orders Barin, Zarkov and Dale to be taken aboard. Ming is impressed with Flash and offers him lordship over Earth in exchange for loyalty. Flash refuses and Ming gives the order to destroy Vultan’s kingdom along with Flash. Flash finds a rocket cycle and escapes before Sky City is destroyed.

Flash contacts Vultan, who is hiding on Arboria, and they plot an attack on Mingo City. Flash pretends to attack Mingo City alone on his rocket cycle. General Kala dispatches the war rocket Ajax to kill Flash, but the Hawkmen ambush and seize the rocket. Meanwhile, Princess Aura overpowers her guard and frees Barin and Zarkov from the execution chamber. Flash and the Hawkmen attack Mingo City in Ajax and Kala activates the defenses as Ming’s and Dale’s wedding begins. Mingo City’s lightning field can only be penetrated by flying Ajax into it at a suicidal speed. Flash volunteers to stay at the helm to ensure success and enable the Hawkmen to invade the city.

Barin fights through Ming’s guards and gets to Sector Alpha 9 and deactivates the lightning field before Ajax hits it. Flash flies the rocket ship into the city’s wedding hall and the ship’s bow impales Ming. He drags himself off the rocket nose, seriously wounded, and Flash offers to spare his life if he will stop the attack on Earth. Ming refuses and attempts to use his power ring on Flash, but his power falters and nothing happens. He then aims the ring at himself and is seemingly vaporized by its remaining power, seconds before the counter to the destruction of the Earth reaches zero. A huge victory celebration ensues.

Barin and Aura become the new leaders in Ming’s place. Barin names Vultan the leader of their armies. Flash, Dale and Zarkov discuss returning to Earth. Zarkov says he doesn’t know how they will get back, but they will try. Barin tells them all they’re welcome to stay, but Dale says she’s a New York City girl, and it’s now too quiet around Mongo.

The final frame shows Ming’s ring being picked up by the hand of an unseen person. Ming’s evil laugh echoes as the ending credits roll. Following the credits, the text “The End” is shown on the screen before a question mark (?) is appended.